Featherweight Jupiter Moon Is Likely a Jumble of Pieces 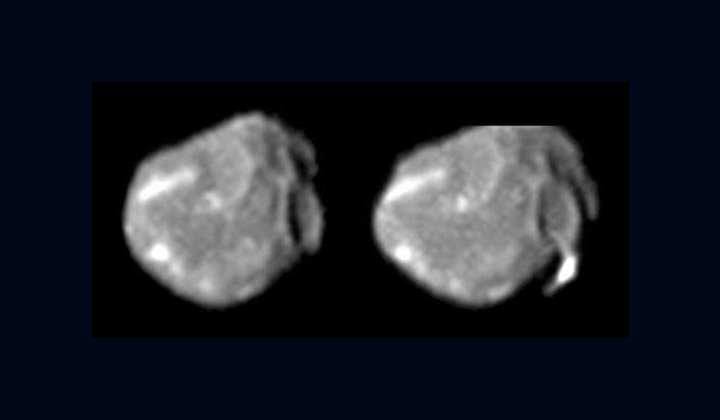 NASA's Galileo spacecraft continues to deliver surprises with the discovery that Jupiter's potato-shaped inner moon, named Amalthea, appears to have a very low density, indicating it is full of holes.

NASA's Galileo spacecraft continues to deliver surprises with the discovery that Jupiter's potato-shaped inner moon, named Amalthea, appears to have a very low density, indicating it is full of holes.

The empty gaps between solid chunks likely take up more of the moon's total volume than the solid pieces, and even the chunks are probably material that is not dense enough to fit some theories about the origin of Jupiter's moons. "Amalthea now seems more likely to be mostly rock with maybe a little ice, rather than a denser mix of rock and iron," said JPL's Dr. Torrence Johnson, project scientist for Galileo.

This red-tinted moon measures about 270 kilometers (168 miles) in length and half that in width. Anderson and colleagues estimated Amalthea's mass from its gravitational effect on Galileo, when the spacecraft passed within about 160 kilometers (99 miles) of the moon on Nov. 5. Dr. Peter Thomas at Cornell University, Ithaca, N.Y., had calculated Amalthea's volume from earlier Galileo images of the moon.

Amalthea's overall density is close to the density of water ice, Anderson reports today at the fall meeting of the American Geophysical Union in San Francisco. However, the moon is almost certainly not a solid hunk of ice. "Nothing in the Jupiter system would suggest a composition that's mainly ice," Anderson said.

Amalthea's irregular shape and low density suggest the moon has been broken into many pieces that now cling together from the pull of each other's gravity, mixed with empty spaces where the pieces don't fit tightly together. "It's probably boulder-size or larger pieces just touching each other, not pressing hard together," Anderson said.

Johnson said, "This finding supports the idea that the inner moons of Jupiter have undergone intense bombardment and breakup. Amalthea may have formed originally as one piece, but then was busted to bits by collisions."

Amalthea does not have quite enough mass to pull itself together into a consolidated, spherical body like Earth's moon or Jupiter's four largest moons. The density estimate obtained from Galileo's flyby extends an emerging pattern of finding irregularly shaped moons and asteroids to be porous rubble piles. What's more of a surprise, Johnson and Anderson said, is the density estimate is so low that even the solid parts of Amalthea are apparently less dense than Io, a larger moon that orbits about twice as far from Jupiter.

One model for the formation of Jupiter's moons suggests moons closer to the planet would be made of denser material than those farther out. That's based on a theory that early Jupiter, like a weaker version of the early Sun, would have emitted enough heat to prevent volatile, low-density material from condensing and being incorporated into the closer moons. Jupiter's four largest moons fit this model, with the innermost of them, Io, also the densest, made mainly of rock and iron. However, the new finding suggests that even if Amalthea is mostly gaps, its solid chunks have less density than Io.

Galileo's flyby of Amalthea brought the spacecraft closer to Jupiter than at any other time since it began orbiting the giant planet on Dec. 7, 1995. After more than 30 close encounters with Jupiter's four largest moons, the flyby was the last for Galileo. Galileo has been put on course for a mission-ending impact with Jupiter's atmosphere on Sept. 21, 2003.

Galileo left Earth aboard NASA's Space Shuttle Atlantis in 1989. JPL, a division of the California Institute of Technology in Pasadena, manages the Galileo mission for NASA's Office of Space Science, Washington. Additional information about the mission is available online at: http://galileo.jpl.nasa.gov
Caption page
Galileo home page