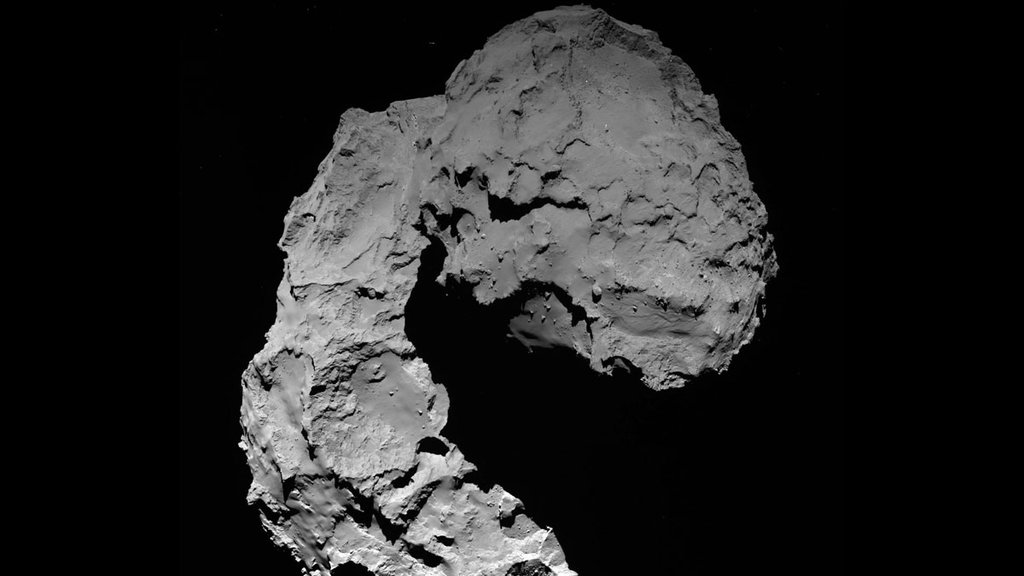 This view shows Comet 67P/Churyumov-Gerasimenko as seen by the OSIRIS wide-angle camera on ESA's Rosetta spacecraft on September 29, 2016, when Rosetta was at an altitude of 14 miles (23 kilometers).
Credit: ESA/Rosetta/MPS for OSIRIS Team MPS/UPD/LAM/IAA/SSO/INTA/UPM/DASP/IDA

The European Space Agency Rosetta mission will end dramatically Friday, Sept. 30, by touching down on a region of a comet known for active pits that spew dust into space.

"The European Space Agency's Rosetta Mission is a magnificent demonstration of what excellent mission design, execution, and international collaboration can achieve," said Geoff Yoder, acting associate administrator for NASA's Science Mission Directorate in Washington. "Being neighbors with a comet for more than two years has given the world invaluable insight into these beautiful nomads of deep space. We congratulate ESA on its many accomplishments during this daring mission."

The final hours of descent will enable Rosetta to make many once-in-a-lifetime measurements, including analyzing gas and dust closer to the surface than ever possible before, and taking very high-resolution images of the comet nucleus. The images will include views of the open pits of the Ma'at region, where the spacecraft is expected to make its controlled impact. Ma'at is home to several active pits more than 330 feet (100 meters) in diameter and 160 to 200 feet (50 to 60 meters) deep.

The walls of the pits exhibit intriguing lumpy structures about 3 feet wide (1 meter wide) called "goose bumps." Scientists believe those structures could be the signatures of early cometesimals that assembled to create the comet in the early phases of solar system formation. Rosetta will attempt to get its closest look yet at these fascinating structures on Sept. 30, when the spacecraft will target a point adjacent to a 430-feet-wide (130-meter), well-defined pit that the mission team has informally named Deir el-Medina.

"Rosetta will keep giving us data to the very end," said Bonnie Buratti, project scientist for the U.S. Rosetta project from NASA's Jet Propulsion Laboratory in Pasadena, California. "NASA's three instruments aboard Rosetta will be among those collecting data all the way down."

MIRO was designed to provide data on how gas and dust leave the surface of the nucleus to form the coma and tail that give comets their intrinsic beauty. Studying the surface temperature and evolution of the coma and tail provides information on how the comet evolves as it approaches and leaves the vicinity of the sun. MIRO has the ability to study water, carbon monoxide, ammonia and methanol.

Alice, an ultraviolet spectrometer, analyzes gases in the comet's coma and tail; measures how fast the comet produces water, carbon monoxide and carbon dioxide (clues to the surface composition of the nucleus); and measures argon levels. These measurements help determine the temperature of the solar system when the nucleus formed more than 4.6 billion years ago.

The Ion and Electron Sensor is part of a suite of five instruments that analyzes the plasma environment of the comet, particularly the coma. The instrument measures the charged particles in the sun's outer atmosphere, or solar wind, as they interact with the gas flowing out from the comet.

The Rosetta mission was launched in 2004 and arrived at comet 67P/Churyumov-Gerasimenko on Aug. 6, 2014. It's the first mission in history to rendezvous with a comet and escort it as it orbits the sun. On Nov. 4, 2014, a smaller lander named Philae -- which had been deployed from the Rosetta mothership -- touched down on the comet and bounced several times before alighting on the surface. Philae obtained the first images taken from a comet's surface and sent back valuable scientific data for several days.

"It will be hard to see that last transmission from Rosetta come to an end," said Art Chmielewski of JPL, project manager for the U.S. Rosetta. "But whatever melancholy we will be experiencing will be more than made up for in the elation that we will feel to have been part of this truly historic mission of exploration."

For more information on the US instruments aboard Rosetta, visit: