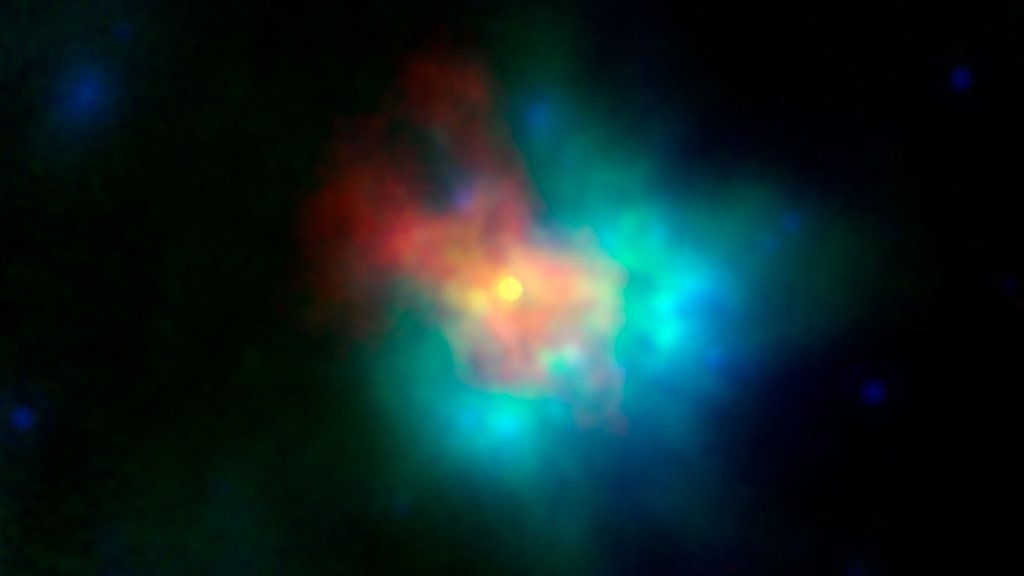 A new study shows that silica - one of the most common substances on Earth - is formed when massive stars explode.

We are all, quite literally, made of star dust. Many of the chemicals that compose our planet and our bodies were formed directly by stars. Now, a new study using observations by NASA's Spitzer Space Telescope reports for the first time that silica - one of the most common minerals found on Earth - is formed when massive stars explode.

Look around you right now and there's a good chance you will see silica (silicon dioxide, SiO2) in some form. A major component of many types of rocks on Earth, silica is used in industrial sand-and-gravel mixtures to make concrete for sidewalks, roads and buildings. One form of silica, quartz, is a major component of sand found on beaches along the U.S. coasts. Silica is a key ingredient in glass, including plate glass for windows, as well as fiberglass. Most of the silicon used in electronic devices comes from silica.

In total, silica makes up about 60 percent of Earth's crust. Its widespread presence on Earth is no surprise, as silica dust has been found throughout the universe and in meteorites that predate our solar system. One known source of cosmic dust is AGB stars, or stars with about the mass of the Sun that are running out of fuel and puff up to many times their original size to form a red giant star. (AGB stars are one type of red giant star.) But silica is not a major component of AGB star dust, and observations had not made it clear if these stars could be the primary producer of silica dust observed throughout the universe.

The new study reports the detection of silica in two supernova remnants, called Cassiopeia A and G54.1+0.3. A supernova is a star much more massive than the Sun that runs out of the fuel that burns in its core, causing it to collapse on itself. The rapid in-fall of matter creates an intense explosion that can fuse atoms together to create "heavy" elements, like sulfur, calcium and silicon.

To identify silica in Cassiopeia A and G54.1+0.3, the team used archival data from Spitzer's IRS instrument and a technique called spectroscopy, which takes light and reveals the individual wavelengths that compose it. (You can observe this effect when sunlight passes through a glass prism and produces a rainbow: The different colors are the individual wavelengths of light that are typically blended together and invisible to the naked eye.)

Chemical elements and molecules each emit very specific wavelengths of light, meaning they each have a distinct spectral "fingerprint" that high-precision spectrographs can identify. In order to discover the spectral fingerprint of a given molecule, researchers often rely on models (typically done with computers) that re-create the molecule's physical properties. Running a simulation with those models then reveals the molecule's spectral fingerprint.

But physical factors can subtly influence the wavelengths that molecules emit. Such was the case with Cassiopeia A. Although the spectroscopy data of Cassiopeia A showed wavelengths close to what would be expected from silica, researchers could not match the data with any particular element or molecule.

Jeonghee Rho, an astronomer at the SETI Institute in Mountain View, California, and the lead author on the new paper, thought that perhaps the shape of the silica grains could be the source of the discrepancy, because existing silica models assumed the grains were perfectly spherical.

She began building models that included some grains with nonspherical shapes. It was only when she completed a model that assumed all the grains were not spherical but, rather, football-shaped that the model "really clearly produced the same spectral feature we see in the Spitzer data," Rho said.

Rho and her coauthors on the paper then found the same feature in a second supernova remnant, G54.1+0.3. The elongated grains may tell scientists something about the exact processes that formed the silica.

The authors also combined the observations of the two supernova remnants from Spitzer with observations from the European Space Agency's Herschel Space Observatory in order to measure the amount of silica produced by each explosion. Herschel detects different wavelengths of infrared light than Spitzer. The researchers looked at the entire span of wavelengths provided by both observatories and identified the wavelength at which the dust has its peak brightness. That information can be used to measure the temperature of dust, and both brightness and temperature are necessary in order to measure the mass. The new work implies that the silica produced by supernovas over time was significant enough to contribute to dust throughout the universe, including the dust that ultimately came together to form our home planet.

The study was published on Oct. 24, 2018, in the Monthly Notices of the Royal Astronomical Society, and it confirms that every time we gaze through a window, walk down the sidewalk or set foot on a pebbly beach, we are interacting with a material made by exploding stars that burned billions of years ago.

The JPL manages the Spitzer Space Telescope mission for NASA's Science Mission Directorate in Washington. Science operations are conducted at the Spitzer Science Center at Caltech in Pasadena, California. Spacecraft operations are based at Lockheed Martin Space in Littleton, Colorado. Data are archived at the Infrared Science Archive housed at IPAC at Caltech.

For more information about Herschel and Spitzer, visit: