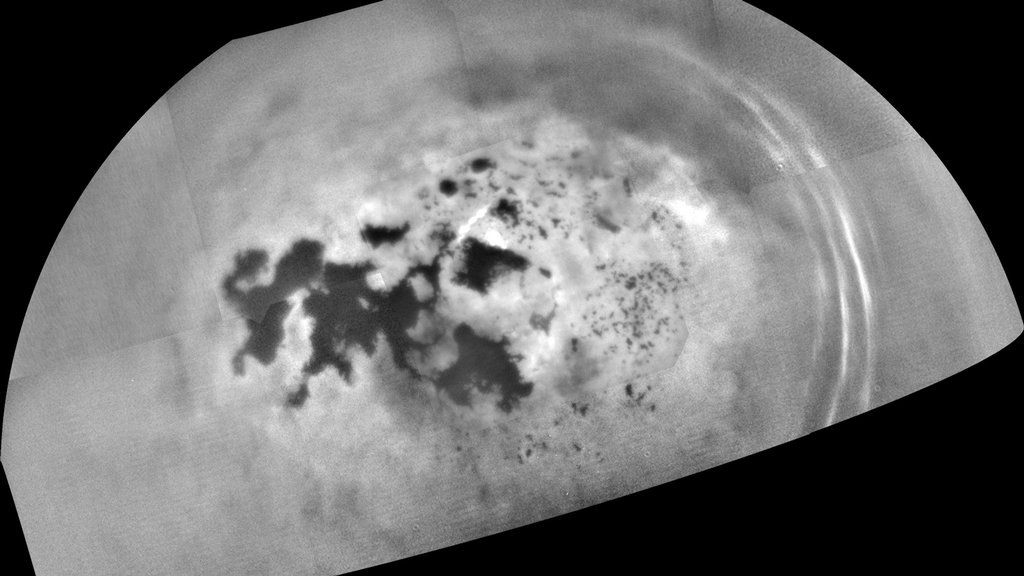 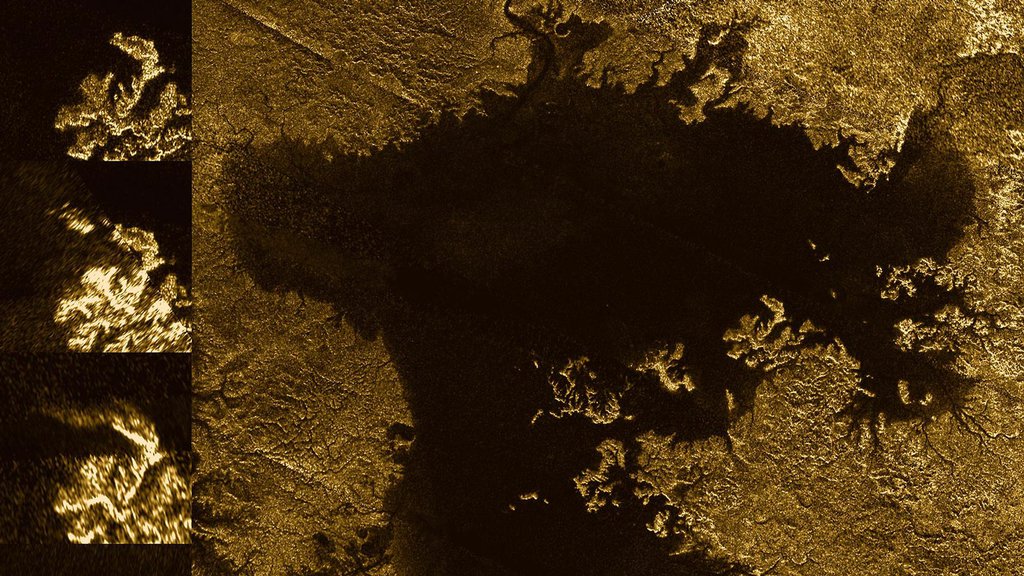 Radar images from Cassini showed a strange island-like feature in one of Titan's hydrocarbon seas that appeared to change over time (series of images at left). One possible explanation for this "magic island" is bubbles.› Full image and caption
Credit: NASA/JPL-Caltech/ASI/Cornell

For the study, researchers at NASA's Jet Propulsion Laboratory in Pasadena, California, simulated the frigid surface conditions on Titan, finding that significant amounts of nitrogen can be dissolved in the extremely cold liquid methane that rains from the skies and collects in rivers, lakes and seas. They demonstrated that slight changes in temperature, air pressure or composition can cause the nitrogen to rapidly separate out of solution, like the fizz that results when opening a bottle of carbonated soda.

NASA's Cassini spacecraft has found that the composition of Titan's lakes and seas varies from place to place, with some reservoirs being richer in ethane than methane. "Our experiments showed that when methane-rich liquids mix with ethane-rich ones -- for example from a heavy rain, or when runoff from a methane river mixes into an ethane-rich lake -- the nitrogen is less able to stay in solution," said Michael Malaska of JPL, who led the study.

The result is bubbles. Lots of bubbles.

The release of nitrogen, known as exsolution, can also occur when methane seas warm slightly during the changing seasons on Titan. A fizzy liquid could also cause problems, potentially, for a future robotic probe sent to float on or swim through Titan's seas. Excess heat emanating from a probe might cause bubbles to form around its structures -- for example, propellers used for propulsion -- making it difficult to steer or keep the probe stable.

The notion of nitrogen bubbles creating fizzy patches on Titan's lakes and seas is relevant to one of the more enchanting unsolved mysteries Cassini has investigated during its time exploring Titan: the so-called "magic islands." During several flybys, Cassini's radar has revealed small areas on the seas that appeared and disappeared, and then (in at least one case) reappeared. Researchers proposed several potential explanations for what could be creating these seemingly island-like features, including the idea of fields of bubbles. The new study provides details about the mechanism that could be forming such bubbles, if they are indeed the culprit.

"Thanks to this work on nitrogen's solubility, we're now confident that bubbles could indeed form in the seas, and in fact may be more abundant than we'd expected," said Jason Hofgartner of JPL, who serves as a co-investigator on Cassini's radar team and was a co-author of the study.

In characterizing how nitrogen moves between Titan's liquid reservoirs and its atmosphere, the researchers also coaxed nitrogen out of a simulated ethane-rich solution as the ethane froze to the bottom of their tiny, simulated Titan lake. Unlike water, which is less dense in its solid form than its liquid form, ethane ice would form on the bottom of Titan's frigid pools. As the ethane crystalizes into ice, there's no room for the dissolved nitrogen gas, and it comes fizzing out.

While the thought of hydrocarbon lakes bubbling with nitrogen on an alien moon is dramatic, Malaska points out that the movement of nitrogen on Titan doesn't just move in one direction. Clearly, it has to get into the methane and ethane before it can get out.

"In effect, it's as though the lakes of Titan breathe nitrogen," Malaska said. "As they cool, they can absorb more of the gas, 'inhaling.' And as they warm, the liquid's capacity is reduced, so they 'exhale.'"

A similar phenomenon occurs on Earth with carbon dioxide absorption by our planet's oceans.

Results of the study were published online in February by the journal Icarus.

Cassini will make its final close flyby of Titan -- its 127th targeted encounter -- on April 22. During the flyby, Cassini will sweep its radar beam over Titan's northern seas one final time. The radar team designed the upcoming observation so that, if magic island features are present this time, their brightness may be useful for distinguishing between bubbles, waves and floating or suspended solids.

The flyby also will bend the spacecraft's course to begin its final series of 22 plunges through the gap between Saturn and its innermost rings, known as Cassini's Grand Finale. The 20-year mission will conclude with a dive into Saturn's atmosphere on Sept. 15.