Europa’s Interior May Be Hot Enough to Fuel Seafloor Volcanoes 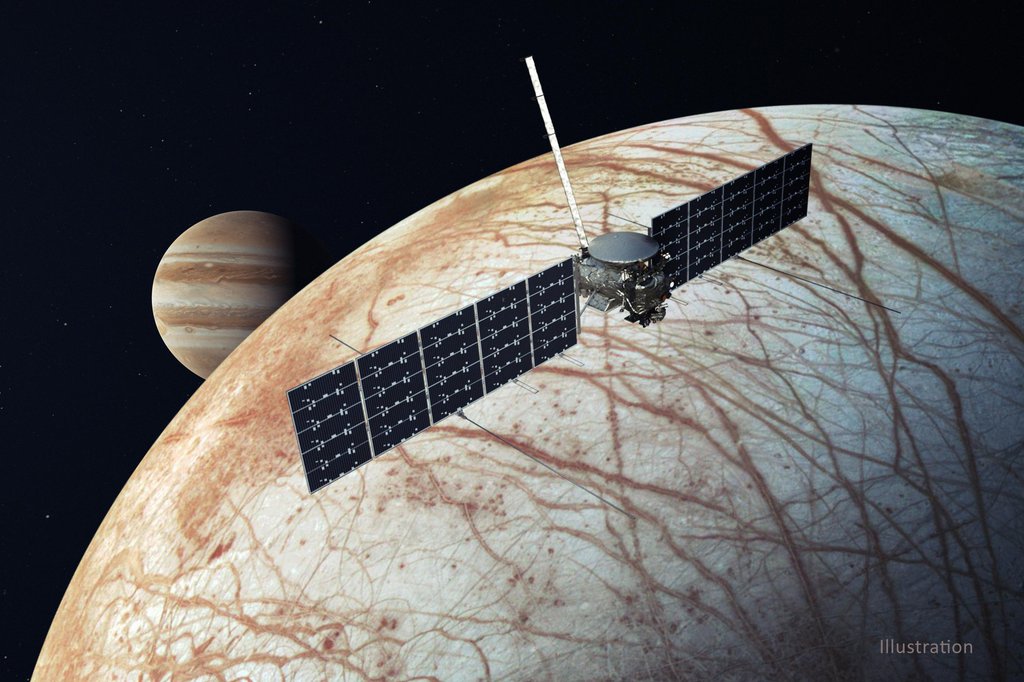 This illustration, updated as of December 2020, depicts NASA’s Europa Clipper spacecraft. The mission, targeting a 2024 launch, will investigate whether Jupiter’s moon Europa and its internal ocean have conditions suitable for life.

Jupiter’s moon Europa has an icy crust covering a vast, global ocean. The rocky layer underneath may be hot enough to melt, leading to undersea volcanoes.

New research and computer modeling show that volcanic activity may have occurred on the seafloor of Jupiter’s moon Europa in the recent past – and may still be happening. NASA’s upcoming Europa Clipper mission, targeting a 2024 launch, will swoop close to the icy moon and collect measurements that may shed light on the recent findings.

Scientists have strong evidence that Europa harbors an enormous ocean between its icy crust and rocky interior. The new work shows how the moon may have enough internal heat to partially melt this rocky layer, a process that could feed volcanoes on the ocean floor. The recent 3D modeling of how this internal heat is produced and transferred is the most detailed and thorough examination yet of the effect this interior heating has on the moon.

The research, published recently in Geophysical Research Letters, models in detail how Europa’s rocky part may flex and heat under the pull of Jupiter’s gravity. It shows where heat dissipates and how it melts that rocky mantle, increasing the likelihood of volcanoes on the seafloor. 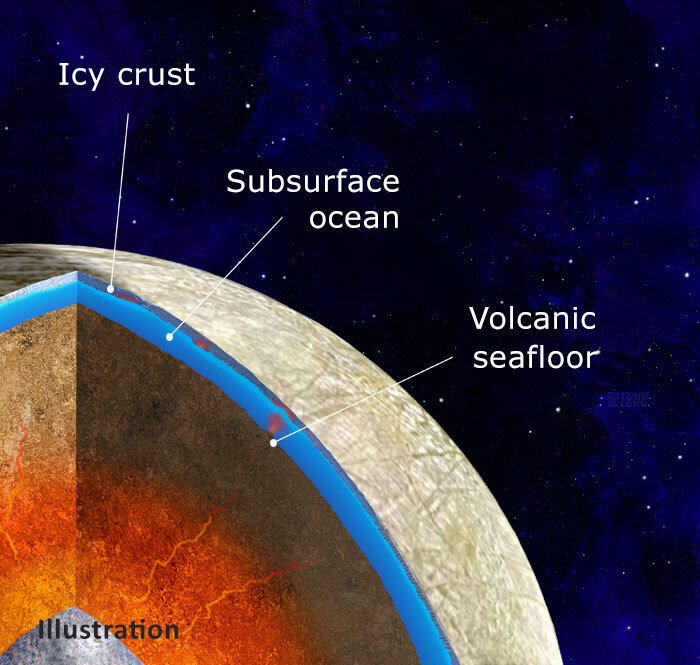 Scientists’ findings suggest that the interior of Jupiter’s moon Europa may consist of an iron core, surrounded by a rocky mantle in direct contact with an ocean under the icy crust. New research models how internal heat may fuel volcanoes on the seafloor.

Volcanic activity on Europa has been a topic of speculation for decades. By comparison, Jupiter’s moon Io is obviously volcanic. Hundreds of volcanoes there erupt lava fountains and eject volcanic gas and dust up to 250 miles (400 kilometers) high – activity that is due to the same kind of internal heating caused by Jupiter’s pull. But Europa is farther away than Io is from its host planet, so scientists have wondered whether the effect would be similar under the icy surface.

Led by Marie Běhounková of Charles University in the Czech Republic, the authors further predicted that volcanic activity is most likely to occur near Europa’s poles – the latitudes where the most heat is generated. They also looked at how volcanic activity may have evolved over time. Long-lived energy sources give more opportunity for potential life to have developed.

Underwater volcanoes, if present, could power hydrothermal systems like those that fuel life at the bottom of Earth’s oceans. On Earth, when seawater comes into contact with hot magma, the interaction results in chemical energy. And it is chemical energy from these hydrothermal systems, rather than from sunlight, that helps support life deep in our own oceans. Volcanic activity on Europa’s seafloor would be one way to support a potential habitable environment in that moon’s ocean.

“Our findings provide additional evidence that Europa’s subsurface ocean may be an environment suitable for the emergence of life,” Běhounková said. “Europa is one of the rare planetary bodies that might have maintained volcanic activity over billions of years, and possibly the only one beyond Earth that has large water reservoirs and a long-lived source of energy.”

NASA scientists will have the opportunity to put the new predictions to the test when Europa Clipper reaches its target in 2030. The spacecraft will orbit Jupiter and perform dozens of close flybys of Europa to map the moon and investigate its composition. Among the science data it collects, the spacecraft will survey the surface in detail and sample the moon’s thin atmosphere.

The surface and atmosphere observations will give scientists a chance to learn more about the moon’s interior ocean if the water percolates up through the icy crust. Scientists believe the exchange of material between the ocean and the crust would leave traces of seawater on the surface. They also believe the exchange may emit gas, and possibly even plumes of water vapor, with ejected particles that could contain materials coming from the seafloor.

As Europa Clipper measures the moon’s gravity and magnetic field, anomalies in those areas, especially toward the poles, could help confirm the volcanic activity predicted by the new research.

“The prospect for a hot, rocky interior and volcanoes on Europa’s seafloor increases the chance that Europa’s ocean could be a habitable environment,” said Europa Clipper Project Scientist Robert Pappalardo of NASA’s Jet Propulsion Laboratory in Southern California. “We may be able to test this with Europa Clipper’s planned gravity and compositional measurements, which is an exciting prospect.”

Missions such as Europa Clipper help contribute to the field of astrobiology, the interdisciplinary research on the variables and conditions of distant worlds that could harbor life as we know it. While Europa Clipper is not a life-detection mission, it will conduct detailed reconnaissance of Europa and investigate whether the icy moon, with its subsurface ocean, has the capability to support life. Understanding Europa’s habitability will help scientists better understand how life developed on Earth and the potential for finding life beyond our planet.

On the Path Toward Unprecedented Science