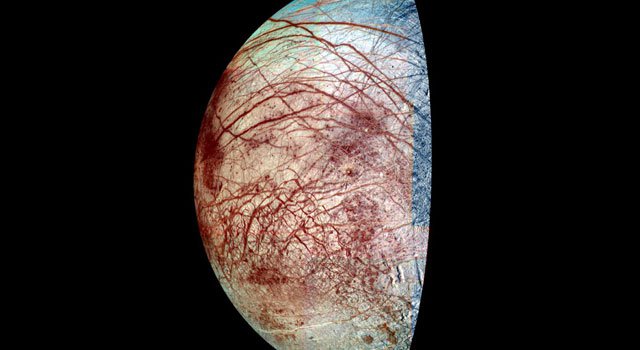 Europa, a moon of Jupiter, appears as a thick crescent in this enhanced-color image from NASA's Galileo spacecraft, which was orbited Jupiter from 1995 to 2003.› Full image and caption
Credit: NASA/JPL/University of Arizona

Jupiter's moon is likely the scene of some unexpectedly fast chemistry between water and sulfur dioxide at extremely cold temperatures.

The frigid ice of Jupiter's moon Europa may be hiding more than a presumed ocean: it is likely the scene of some unexpectedly fast chemistry between water and sulfur dioxide at extremely cold temperatures. Although these molecules react easily as liquids-they are well-known ingredients of acid rain-Mark Loeffler and Reggie Hudson at NASA's Goddard Space Flight Center in Greenbelt, Md., now report that they react as ices with surprising speed and high yield at temperatures hundreds of degrees below freezing. Because the reaction occurs without the aid of radiation, it could take place throughout Europa's thick coating of ice-an outcome that would revamp current thinking about the chemistry and geology of this moon and perhaps others.

"When people talk about chemistry on Europa, they typically talk about reactions that are driven by radiation," says Goddard scientist Mark Loeffler, who is first author on the paper being published in Geophysical Research Letters. That's because the moon's temperature hovers around 86 to 130 Kelvin (minus 300 to minus 225 degrees Fahrenheit). In this extreme cold, most chemical reactions require an infusion of energy from radiation or light. On Europa, the energy comes from particles from Jupiter's radiation belts. Because most of those particles penetrate just fractions of an inch into the surface, models of Europa's chemistry typically stop there.

"Once you get below Europa's surface, it's cold and solid, and you normally don't expect things to happen very fast under those conditions," explains co-author Reggie Hudson, the associate lab chief of Goddard's Astrochemistry Laboratory.

"But with the chemistry we describe," adds Loeffler, "you could have ice 10 or 100 meters [roughly 33 or 330 feet] thick, and if it has sulfur dioxide mixed in, you're going to have a reaction."

"This is an extremely important result for understanding the chemistry and geology of Europa's icy crust," says Robert E. Johnson, an expert on radiation-induced chemistry on planets and a professor of engineering physics at the University of Virginia in Charlottesville.

From remote observations, astronomers know that sulfur is present in Europa's ice. Sulfur originates in the volcanoes of Jupiter's moon Io, then becomes ionized and is transported to Europa, where it gets embedded in the ice. Additional sulfur might come from the ocean that's thought to lie beneath Europa's surface. "However," says Johnson, "the fate of the implanted or any subsurface sulfur is not understood and depends on the geology and chemistry in the ice crusts."

In experiments that simulated the conditions on Europa, Loeffler and Hudson sprayed water vapor and sulfur dioxide gas onto quarter-sized mirrors in a high-vacuum chamber. Because the mirrors were kept at about 50 to 100 Kelvin (about minus 370 to minus 280 degrees Fahrenheit), the gases immediately condensed as ice. As the reaction proceeded, the researchers used infrared spectroscopy to watch the decrease in concentrations of water and sulfur dioxide and the increase in concentrations of positive and negative ions generated.

Despite the extreme cold, the molecules reacted quickly in their icy forms. "At 130 Kelvin [about minus 225 degrees Fahrenheit], which represents the warm end of the expected temperatures on Europa, this reaction is essentially instantaneous," says Loeffler. "At 100 Kelvin, you can saturate the reaction after half a day to a day. If that doesn't sound fast, remember that on geologic timescales-billions of years-a day is faster than the blink of an eye."

To test the reaction, the researchers added frozen carbon dioxide, also known as dry ice, which is commonly found on icy bodies, including Europa. "If frozen carbon dioxide had blocked the reaction, we wouldn't be nearly as interested," explains Hudson, "because then the reaction probably wouldn't be relevant to Europa's chemistry. It would be a laboratory curiosity." But the reaction continued, which means it could be significant on Europa as well as Ganymede and Callisto, two more of Jupiter's moons, and other places where both water and sulfur dioxide are present.

The reaction converted one-quarter to nearly one-third of the sulfur dioxide into product. "This is an unexpectedly high yield for this chemical reaction," says Loeffler. "We would have been happy with five percent." What's more, the positive and negative ions produced will react with other molecules. This could lead to some intriguing chemistry, especially because bisulfite, a type of sulfur ion, and some other products of this reaction are refractory-stable enough to stick around for a while.

Robert Carlson, a senior research scientist at NASA's Jet Propulsion Laboratory in Pasadena, Calif., who collaborates with the two researchers, notes that earlier hints of water and sulfur dioxide reacting as solids were found but not explained. "The Loeffler and Hudson results show that really interesting acid–base reactions are going on," he says. "I am anxious to see what might happen when other species are added and how the minor concentrations of sulfur dioxide on the satellite surfaces affect the overall chemistry."

The ultimate test of the laboratory experiments will be whether evidence of any reaction products can be found in data collected during remote observations or future visits to Europa. Johnson agrees that if subsurface sulfur dioxide on Europa "reacts to form refractory species, as [the researchers] indicate, then the picture changes completely. " These results not only will affect our understanding of Europa, but can also be further refined and tested with the proposed Europa Jupiter System mission.

NASA's Jet Propulsion Laboratory in Pasadena, California, will manage NASA's contributions to the Europa Jupiter System mission for NASA's Science Mission Directorate in Washington. ESA's Directorate of Science and Robotic Exploration will manage the European contribution to the Jupiter mission. JPL is a division of the California Institute of Technology in Pasadena.