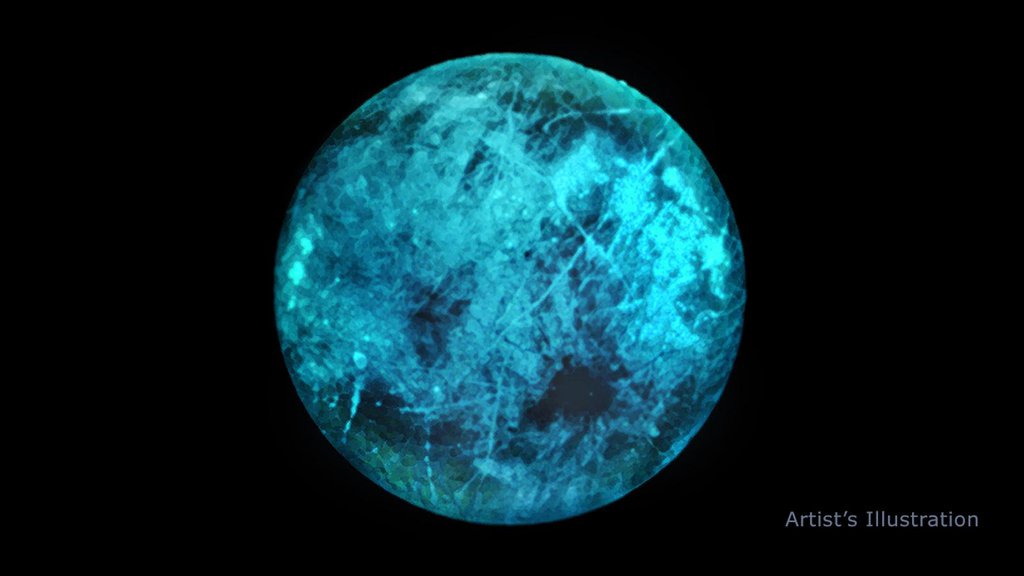 This illustration of Jupiter's moon Europa shows how the icy surface may glow on its nightside, the side facing away from the Sun. Variations in the glow and the color of the glow itself could reveal information about the composition of ice on Europa's su
Credit: NASA/JPL-Caltech
Full Image Details

New lab experiments re-create the environment of Europa and find that the icy moon shines, even on its nightside. The effect is more than just a cool visual.

As the icy, ocean-filled moon Europa orbits Jupiter, it withstands a relentless pummeling of radiation. Jupiter zaps Europa's surface night and day with electrons and other particles, bathing it in high-energy radiation. But as these particles pound the moon's surface, they may also be doing something otherworldly: making Europa glow in the dark.

New research from scientists at NASA's Jet Propulsion Laboratory in Southern California details for the first time what the glow would look like, and what it could reveal about the composition of ice on Europa's surface. Different salty compounds react differently to the radiation and emit their own unique glimmer. To the naked eye, this glow would look sometimes slightly green, sometimes slightly blue or white and with varying degrees of brightness, depending on what material it is.

Scientists use a spectrometer to separate the light into wavelengths and connect the distinct "signatures," or spectra, to different compositions of ice. Most observations using a spectrometer on a moon like Europa are taken using reflected sunlight on the moon's dayside, but these new results illuminate what Europa would look like in the dark.

"We were able to predict that this nightside ice glow could provide additional information on Europa's surface composition. How that composition varies could give us clues about whether Europa harbors conditions suitable for life," said JPL's Murthy Gudipati, lead author of the work published Nov. 9 in Nature Astronomy.

That's because Europa holds a massive, global interior ocean that could percolate to the surface through the moon's thick crust of ice. By analyzing the surface, scientists can learn more about what lies beneath.

Scientists have inferred from prior observations that Europa's surface could be made of a mix of ice and commonly known salts on Earth, such as magnesium sulfate (Epsom salt) and sodium chloride (table salt). The new research shows that incorporating those salts into water ice under Europa-like conditions and blasting it with radiation produces a glow.

That much was not a surprise. It's easy to imagine an irradiated surface glowing. Scientists know the shine is caused by energetic electrons penetrating the surface, energizing the molecules underneath. When those molecules relax, they release energy as visible light.

"But we never imagined that we would see what we ended up seeing," said JPL's Bryana Henderson, who co-authored the research. "When we tried new ice compositions, the glow looked different. And we all just stared at it for a while and then said, 'This is new, right? This is definitely a different glow?' So we pointed a spectrometer at it, and each type of ice had a different spectrum."

To study a laboratory mockup of Europa's surface, the JPL team built a unique instrument called Ice Chamber for Europa's High-Energy Electron and Radiation Environment Testing (ICE-HEART). They took ICE-HEART to a high-energy electron beam facility in Gaithersburg, Maryland, and started the experiments with an entirely different study in mind: to see how organic material under Europa ice would react to blasts of radiation.

They didn't expect to see variations in the glow itself tied to different ice compositions. It was - as the authors called it - serendipity.

"Seeing the sodium chloride brine with a significantly lower level of glow was the 'aha' moment that changed the course of the research," said Fred Bateman, co-author of the paper. He helped conduct the experiment and delivered radiation beams to the ice samples at the Medical Industrial Radiation Facility at the National Institute of Standards and Technology in Maryland.

A moon that's visible in a dark sky may not seem unusual; we see our own Moon because it reflects sunlight. But Europa's glow is caused by an entirely different mechanism, the scientists said. Imagine a moon that glows continuously, even on its nightside - the side facing away from the Sun.

"If Europa weren't under this radiation, it would look the way our moon looks to us - dark on the shadowed side," Gudipati said. "But because it's bombarded by the radiation from Jupiter, it glows in the dark."

Set to launch in the mid-2020s, NASA's upcoming flagship mission Europa Clipper will observe the moon's surface in multiple flybys while orbiting Jupiter. Mission scientists are reviewing the authors' findings to evaluate if a glow would be detectable by the spacecraft's science instruments. It's possible that information gathered by the spacecraft could be matched with the measurements in the new research to identify the salty components on the moon's surface or narrow down what they might be.

"It's not often that you're in a lab and say, 'We might find this when we get there,'" Gudipati said. "Usually it's the other way around - you go there and find something and try to explain it in the lab. But our prediction goes back to a simple observation, and that's what science is about."