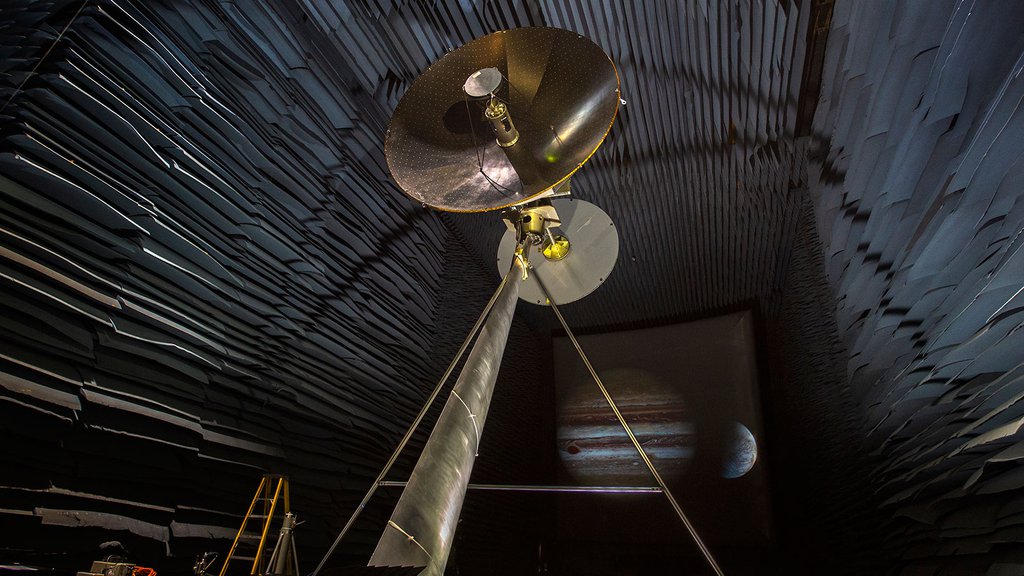 The indoor Experimental Test Range at NASA's Langley Research Center is putting a Europa Clipper antenna prototype through its paces, before the mission to Jupiter's moon.

It probably goes without saying, but this isn't your everyday satellite dish.

In fact, it's not a satellite dish at all. It's a high-gain antenna (HGA), and a future version of it will send and receive signals to and from Earth from a looping orbit around Jupiter.

The antenna will take that long journey aboard NASA's Europa Clipper, a spacecraft that will conduct detailed reconnaissance of Jupiter's moon Europa to see whether the icy orb could harbor conditions suitable for life. Scientists believe there's a massive salty ocean beneath Europa's icy surface. The antenna will beam back high-resolution images and scientific data from Europa Clipper's cameras and science instruments.

The full-scale prototype antenna, which at 10 feet (3 meters) tall is the same height as a standard basketball hoop, is in the Experimental Test Range (ETR) at NASA's Langley Research Center in Hampton, Virginia. Researchers from NASA's Jet Propulsion Laboratory in Pasadena, California, the Johns Hopkins University Applied Physics Laboratory in Laurel, Maryland, and Langley are testing the prototype in the ETR in order to assess its performance and demonstrate the high pointing accuracies required for the Europa Clipper mission.

The ETR is an indoor electromagnetic test facility that allows researchers to characterize transmitters, receivers, antennas and other electromagnetic components and subsystems in a scientifically controlled environment.

"Several years ago we scoured the country to find a facility that was capable of making the difficult measurements that would be required on the HGA and found that the ETR clearly was it,"said Thomas Magner, assistant project manager for Europa Clipper at the Applied Physics Laboratory. "The measurements that will be performed in the ETR will demonstrate that the Europa Clipper mission can get a large volume of scientific data back to Earth and ultimately determine the habitability of Europa."

Tests on this prototype antenna are scheduled to wrap up soon; however, researchers plan to return to the ETR in 2020 to conduct additional tests on Europa Clipper's high-gain antenna flight article. Europa Clipper plans to launch in the 2020s, with travel time to Jupiter taking three to seven years (depending on the launch vehicle and which planetary alignments can be utilized).

JPL manages the Europa Clipper mission for NASA's Science Mission Directorate. The multiple-flyby concept was developed in partnership with the Applied Physics Laboratory.