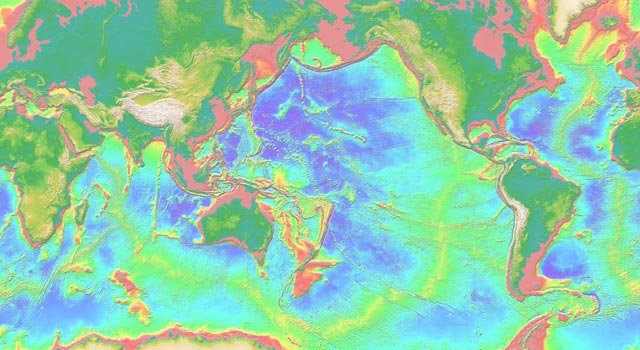 A new model uses measurements from mid-ocean ridges (yellow and green) to precisely describe the movements of interlocking tectonic plates that make up about 97 percent of Earth's surface.
Credit: D. Sandwell/Scripps Institute of Oceanography and W. H. F. Smith/NOAA

NASA and university researchers have released the result of a 20-year effort to precisely describe the relative movements of Earth's interlocking tectonic plates.

When it comes to 3-D puzzles, Rubik's cube pales in comparison with the latest creation from JPL Geophysicist Donald Argus and colleagues Chuck DeMets of the University of Wisconsin-Madison and Richard Gordon of Rice University, Houston. The trio has just put the finishing touches on a 20-year effort to precisely describe the relative movements of the 25 interlocking tectonic plates that account for about 97 percent of Earth's surface.

Earth's tectonic plates are in constant motion, sliding past one another as they float atop our planet's molten interior. Their collisions and shifts can create mountain ranges or cause earthquakes, like the ones that struck Haiti and Chile this year.

The model, called MORVEL, for "Mid-Ocean Ridge Velocities," significantly improves the resolution and precision of the researchers' previous model of tectonic plate velocities published in 1990. It can be used to predict how each tectonic plate moves in relation to other plates, and allows scientists to predict future plate movements and identify places where movements have changed over time, areas that are useful for studying the underlying forces that control plate movements.

For more information on MORVEL, see the Rice news release at: