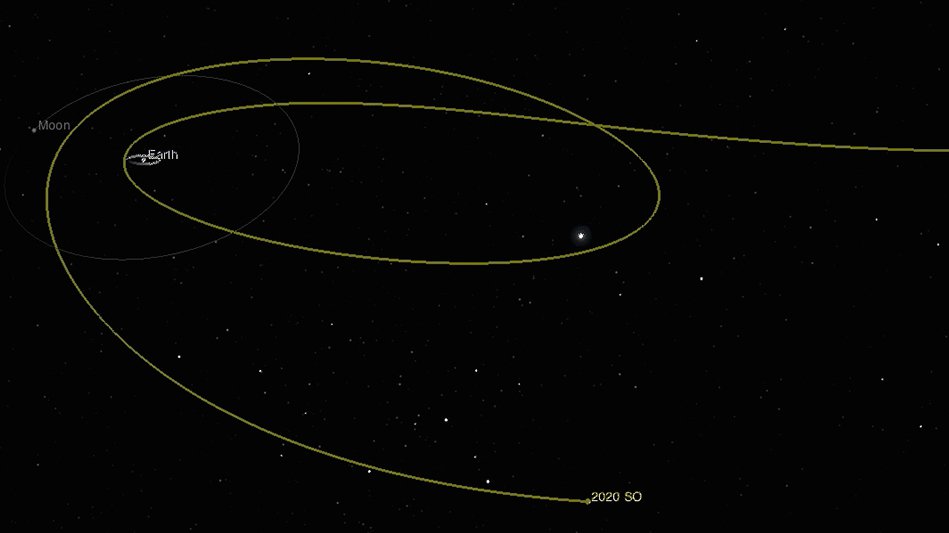 This animation shows the orbit of 2020 SO that was captured by Earth's gravity on Nov. 8, 2020. It will escape in March 2021. Its motion has been speeded up a million times faster than real time.
Credit: NASA/JPL-Caltech

In 1966, NASA launched Surveyor 2 to the Moon. Now its rocket booster has apparently returned to near-Earth space.

Earth has captured a tiny object from its orbit around the Sun and will keep it as a temporary satellite for a few months before it escapes back to a solar orbit. But the object is likely not an asteroid; it's probably the Centaur upper stage rocket booster that helped lift NASA's ill-fated Surveyor 2 spacecraft toward the Moon in 1966.

This story of celestial catch-and-release begins with the detection of an unknown object by the NASA-funded Pan-STARRS1 survey telescope on Maui in September. Astronomers at Pan-STARRS noticed that this object followed a slight but distinctly curved path in the sky, which is a sign of its proximity to Earth. The apparent curvature is caused by the rotation of the observer around Earth's axis as our planet spins. Assumed to be an asteroid orbiting the Sun, the object was given a standard designation by the Minor Planet Center in Cambridge, Massachusetts: 2020 SO. But scientists at the Center for Near-Earth Object Studies (CNEOS) at NASA's Jet Propulsion Laboratory in Southern California saw the object's orbit and suspected it was not a normal asteroid.

Most asteroids' orbits are more elongated and tilted relative to Earth's orbit. But the orbit of 2020 SO around the Sun was very similar to that of Earth: It was at about the same distance, nearly circular, and in an orbital plane that almost exactly matched that of our planet - highly unusual for a natural asteroid.

As astronomers at Pan-STARRS and around the world made additional observations of 2020 SO, the data also started to reveal the degree to which the Sun's radiation was changing 2020 SO's trajectory - an indication that it may not be an asteroid after all. 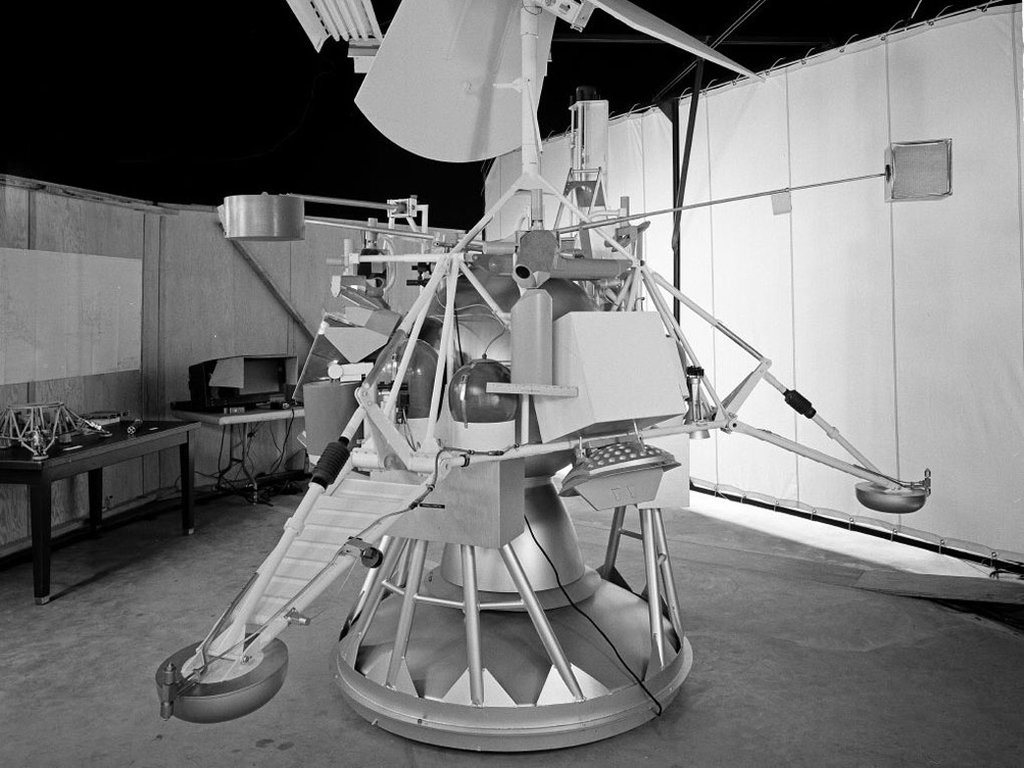 This 1964 photograph shows a Centaur upper-stage rocket before being mated to an Atlas booster. A similar Centaur was used during the launch of Surveyor 2 two years later.

The pressure exerted by sunlight is small but continuous, and it has a greater effect on a hollow object than a solid one. A spent rocket is essentially an empty tube and therefore is a low-density object with a large surface area. So it will be pushed around by solar radiation pressure more than a solid, high-density clump of rock - much like an empty soda can will be pushed by the wind more than a small stone.

"Solar radiation pressure is a non-gravitational force that is caused by light photons emitted by the Sun hitting a natural or artificial object," said Davide Farnocchia, a navigation engineer at JPL, who analyzed 2020 SO's trajectory for CNEOS. "The resulting acceleration on the object depends on the so-called area-to-mass ratio, which is greater for small and light, low-density objects."

With the analysis of more than 170 detailed measurements of 2020 SO's position over the last three months, including observations made by the NASA-funded Catalina Sky Survey in Arizona and ESA's (European Space Agency's) Optical Ground Station in Tenerife, Spain, the impact of solar radiation pressure became evident and confirmed 2020 SO's low-density nature. The next step was to figure out where the suspected rocket booster could have come from. 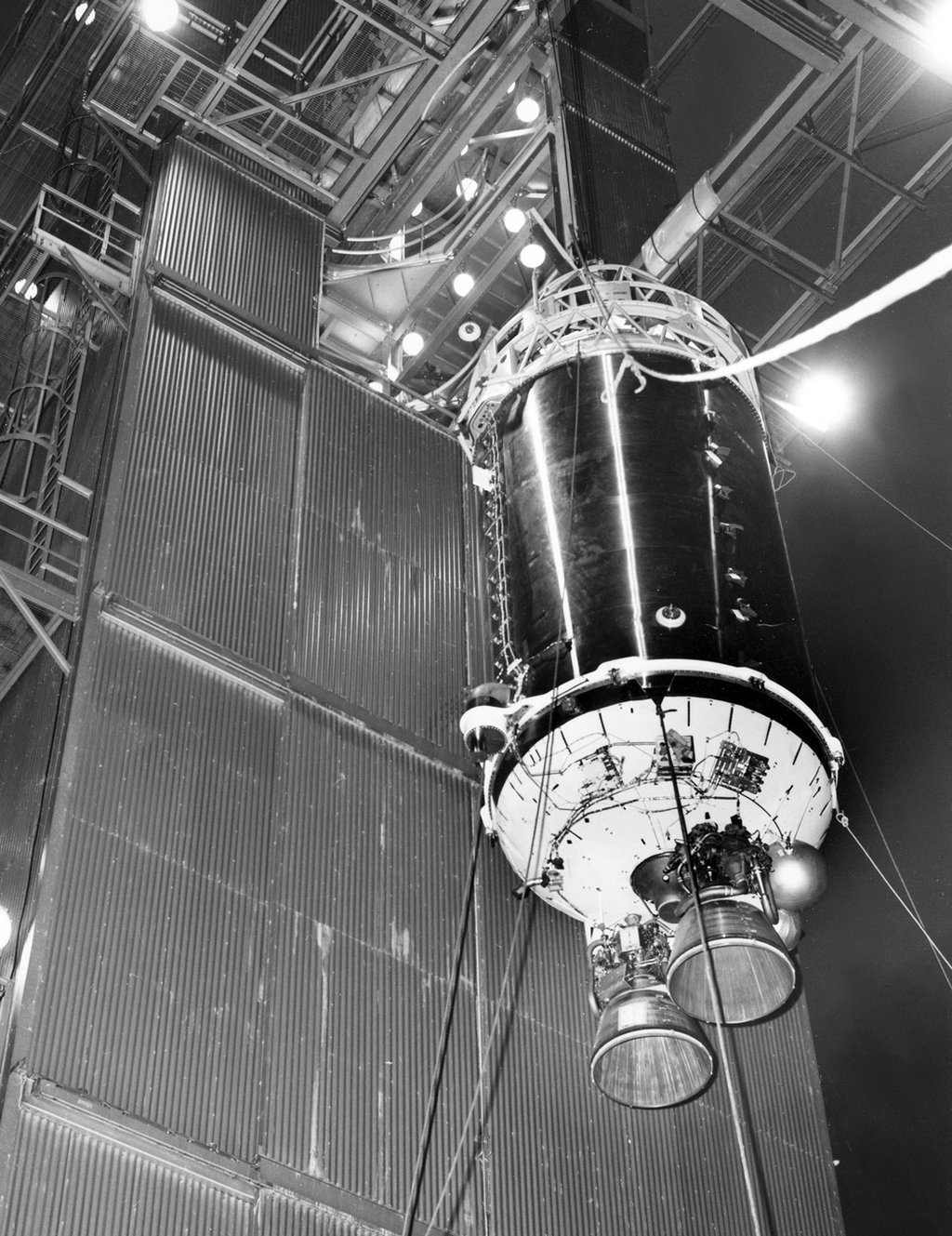 This 1964 photograph shows a Centaur upper-stage rocket before being mated to an Atlas booster. A similar Centaur was used during the launch of Surveyor 2 two years later.

The Surveyor 2 lunar lander was launched toward the Moon on Sept. 20, 1966, on an Atlas-Centaur rocket. The mission was designed to reconnoiter the lunar surface ahead of the Apollo missions that led to the first crewed lunar landing in 1969. Shortly after lift-off, Surveyor 2 separated from its Centaur upper-stage booster as intended. But control of the spacecraft was lost a day later when one of its thrusters failed to ignite, throwing it into a spin. The spacecraft crashed into the Moon just southeast of Copernicus crater on Sept. 23, 1966. The spent Centaur upper-stage rocket, meanwhile, sailed past the Moon and disappeared into an unknown orbit about the Sun.

Suspicious that 2020 SO was a remnant of an old lunar mission, CNEOS Director Paul Chodas "turned back the clock" and ran the object's orbit backward to determine where it had been in the past. Chodas found that 2020 SO had come somewhat close to Earth a few times over the decades, but 2020 SO's approach in late 1966, according to his analysis, would have been close enough that it may have originated from Earth.

"One of the possible paths for 2020 SO brought the object very close to Earth and the Moon in late September 1966," said Chodas. "It was like a eureka moment when a quick check of launch dates for lunar missions showed a match with the Surveyor 2 mission."

Now, in 2020, the Centaur appears to have returned to Earth for a brief visit. On Nov. 8, 2020 SO slowly drifted into Earth's sphere of gravitational dominance, a region called the Hill sphere that extends roughly 930,000 miles (1.5 million kilometers) from our planet. That's where 2020 SO will remain for about four months before it escapes back into a new orbit around the Sun in March 2021.

Before it leaves, 2020 SO will make two large loops around our planet, with its closest approach on Dec. 1. During this period, astronomers will get a closer look and study its composition using spectroscopy to confirm if 2020 SO is indeed an artifact from the early Space Age.

JPL, a division of Caltech in Pasadena, California, hosts CNEOS for NASA's Near-Earth Object Observations Program that is managed within NASA's Planetary Defense Coordination Office. More information about CNEOS, asteroids, and near-Earth objects can be found at: