This animation shows Jupiter as revealed by a powerful telescope and a mid-infrared filter sensitive to the giant planet's tropospheric temperatures and cloud thickness. It combines observations made on Jan. 14, 2017, using the Subaru Telescope in Hawaii.› Full image and caption
Credit: NAOJ/NASA/JPL-Caltech 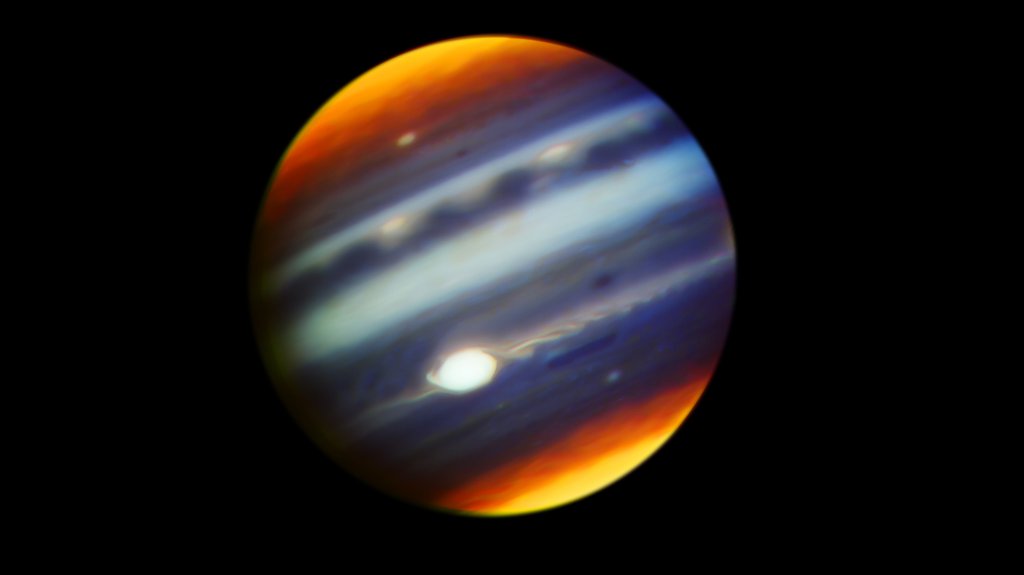 This composite, false-color infrared image of Jupiter reveals haze particles over a range of altitudes, as seen in reflected sunlight. It was taken using the Gemini North telescope in Hawaii on May 18, 2017, in collaboration with observations of Jupiter by NASA's Juno mission.› Full image and caption
Credit: Gemini Observatory/AURA/NSF/NASA/JPL-Caltech 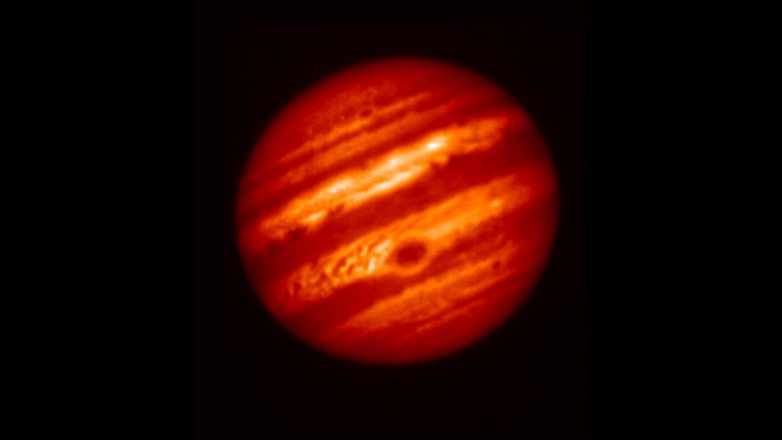 This false-color image of Jupiter was taken on May 18, 2017, with the Subaru Telescope in Hawaii, using a mid-infrared filter centered at a wavelength of 8.8 microns. The Great Red Spot appears at the lower center of the planet as a cold region with a thick cloud layer.› Full image and caption
Credit: NAOJ/NASA/JPL-Caltech

Telescopes in Hawaii have obtained new images of Jupiter and its Great Red Spot, which will assist the first-ever close-up study of the Great Red Spot, planned for July 10.

Telescopes in Hawaii have obtained new images of Jupiter and its Great Red Spot, which will assist the first-ever close-up study of the Great Red Spot, planned for July 10. On that date, NASA's Juno spacecraft will fly directly over the giant planet's most famous feature at an altitude of only about 5,600 miles (9,000 kilometers).

Throughout the Juno mission, numerous observations of Jupiter by Earth-based telescopes have been acquired in coordination with the mission, to help Juno investigate the giant planet's atmosphere. On May 18, 2017, the Gemini North telescope and the Subaru Telescope, both on Hawaii's Mauna Kea peak, simultaneously examined Jupiter in very high resolution at different wavelengths. These latest observations supplement others earlier this year in providing information about atmospheric dynamics at different depths at the Great Red Spot and other regions of Jupiter.

The Great Red Spot is a swirling storm, centuries old and wider than the diameter of Earth. Juno will use multiple instruments to study this feature when it flies over it about 12 minutes after the spacecraft makes the closest approach to Jupiter of its current orbit at 6:55 p.m. on July 10, PDT (9:55 p.m. on July 10, EDT; 1:55 a.m. on July 11, Universal Time). Juno entered orbit around Jupiter on July 4, 2016.

"Observations with Earth's most powerful telescopes enhance the spacecraft's planned observations by providing three types of additional context," said Juno science team member Glenn Orton of NASA's Jet Propulsion Laboratory, Pasadena, California. "We get spatial context from seeing the whole planet. We extend and fill in our temporal context from seeing features over a span of time. And we supplement with wavelengths not available from Juno. The combination of Earth-based and spacecraft observations is a powerful one-two punch in exploring Jupiter."

Orton collaborated with researchers at Gemini; Subaru; the University of California, Berkeley; Tohoku University, Japan; and elsewhere in planning the recent observations.

The observers used Gemini North on May 18 to examine Jupiter through special near-infrared filters. The filters exploit specific colors of light that can penetrate the upper atmosphere and clouds of Jupiter, revealing mixtures of methane and hydrogen in the planet's atmosphere. These observations showed a long, fine-structured wave extending off the eastern side of the Great Red Spot.

On the same night, researchers used Subaru's Cooled Mid-Infrared Camera and Spectrometer (COMICS), with filters sensitive to temperatures at different layers of Jupiter's atmosphere. These mid-infrared observations showed the Great Red Spot "had a cold and cloudy interior increasing toward its center, with a periphery that was warmer and clearer," Orton said. "A region to its northwest was unusually turbulent and chaotic, with bands that were cold and cloudy, alternating with bands that were warm and clear."

For more information about the National Astronomical Observatory of Japan's Subaru Telescope, visit:

For more information about the Gemini Observatory, a partnership of the United States, Canada, Brazil, Argentina and Chile, visit:

JPL manages the Juno mission for the principal investigator, Scott Bolton, of Southwest Research Institute in San Antonio. The Juno mission is part of the New Frontiers Program managed by NASA's Marshall Space Flight Center in Huntsville, Alabama, for the Science Mission Directorate. Lockheed Martin Space Systems, Denver, built the spacecraft. JPL is a division of Caltech in Pasadena, California. More information on the Juno mission is available at: