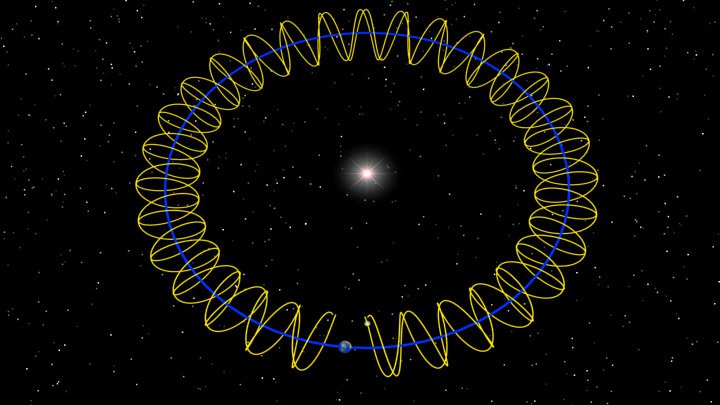 The first asteroid discovered to orbit the Sun in nearly the same path as Earth will make its closest approach to our planet this month before scurrying away for 95 years.

The first asteroid discovered to orbit the Sun in nearly the same path as Earth will make its closest approach to our planet this month before scurrying away for 95 years.

The space rock, measuring about 60 meters (approximately 200 feet) across, is like a mouse teasing a cat. According to an international team of astronomers, including a researcher from NASA's Jet Propulsion Laboratory in Pasadena, Calif., the asteroid approaches the Earth, first on one side and then on the other. The team's report appeared in the October 2002 issue of the journal Meteoritics & Planetary Science.

The asteroid, named 2002 AA29, traces an unusual horseshoe pattern relative to Earth. The asteroid alternately leads and follows Earth around the Sun without ever passing it. "In some ways, the Earth and this asteroid are like two racecars on a circular track," said JPL's Dr. Paul Chodas, who discovered the object's unusual motion. "Right now the asteroid is on a slightly slower track just outside Earth's, and our planet is catching up."

On January 8, 2003, the tiny body will come within approximately 5.9 million kilometers (3.7 million miles) of Earth, its closest approach for almost a century. "Unlike racecars, the two bodies will not pass when they approach each other," Chodas said. "Instead, the combined gravitational effects of the Earth and Sun will nudge the asteroid onto a slightly faster track just inside Earth's, and it will begin to pull ahead."

In 95 years, the asteroid will have advanced all the way around to where it is catching up to Earth from behind. A similar interaction with gravity from both Earth and the Sun will then push the asteroid back onto a slower outside track, and the pattern will repeat. To an observer moving with the Earth, the asteroid appears to trace out a horseshoe pattern.

"There's no possibility that this asteroid could hit Earth, because Earth's gravity rebuffs its periodic advances and keeps it at bay," said Dr. Don Yeomans, JPL manager of NASA's Near Earth Objects Program Office. "The asteroid and Earth take turns sneaking up on each other, but they never get too close."

The team's calculations show that in about 600 years, the asteroid may begin looping around Earth like a tiny, distant quasi-moon. "The asteroid will appear to orbit the Earth at that time, but in fact it will be too far away to be considered a true satellite of our planet," Chodas said. "Our calculations indicate the space rock will circle the Earth as a quasi-satellite for about 40 years before resuming its horseshoe orbital pattern."

JPL is a division of the California Institute of Technology in Pasadena, Calif.