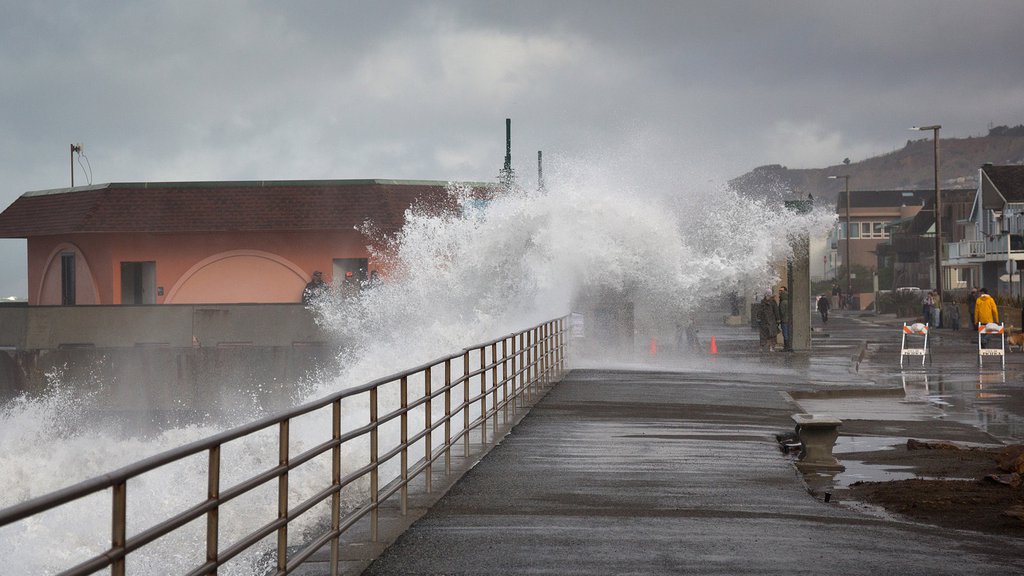 A new study explores the relationship between climate cycles and sea level variations, and could lead to better predictions of sea level changes.

The tropical Pacific Ocean isn't flat like a pond. Instead, it regularly has a high side and a low side. Natural cycles such as El Niño and La Niña events cause this sea level seesaw to tip back and forth, with the ocean near Asia on one end and the ocean near the Americas on the other. But over the last 30 years, the seesaw's wobbles have been more extreme, causing variations in sea levels up to three times higher than those observed in the previous 30 years. Why might this be?

A new NASA/university study has found the differing alignments of two separate climate cycles could be causing these intensifying swings, which occur on top of a global rise in sea level due to melting ice sheets and warming oceans. The findings may help improve forecasts of sea level variations, allowing vulnerable coastal communities to prepare for their increased risk of flooding, erosion and other damage due to higher sea levels.

ENSO's phases are the well-known El Niño and La Niña events. They are detected as warm or cool surface waters, respectively, in the tropical Pacific, around the equator. These events arise every few years and last six to 18 months. The PDO's two phases are called positive and negative. They are also detected as warm or cool pools of surface waters, but those pools appear at least a thousand miles north of the equator -- north of 20 degrees north latitude. The PDO usually remains in a single phase for 20 or 30 years, though it may briefly flip to the opposite phase within that time.

Song and his team found that the phases of these cycles can either reinforce or dampen each other, directly affecting the variability of sea level across the Pacific.

From 1990 to 2000, the magnitude of these sea level swings averaged about 6 inches (16 centimeters) -- five times the height of global sea level rise during the same period. Asia is currently on the high side of the sea level seesaw, while coastlines in the Americas as far north as Southern California are benefiting from a lower sea level. For communities threatened by rising seas, predicting when the seesaw will swing the other way is critical.

The two phases of the PDO and the two phases of ENSO can combine in four different ways, just as when you flip a dime and a nickel together you can get four different combinations of heads and tails. Song and his colleagues made a 60-year record of when each of the four combinations prevailed in the tropical Pacific and compared that record with the observed east-west swings in sea level over the same period.

"These things matched so nicely that we were very surprised," said Jae-Hong Moon, lead author of a paper on the research published in the Journal of Geophysical Research -- Oceans. Moon did most of the research while working at JPL but is now an assistant professor at Jeju National University, Jeju City, South Korea.

These newfound correlations provide a plausible answer to the question of why sea level swings appear to have intensified in recent decades. For the entire period of 1950 to 1980, the Pacific was in a negative PDO phase while El Niño and La Niña events occurred. This means that only two of the four possible combinations of phases could occur. Study authors argue that when one of these two combinations -- negative PDO and El Niño -- is in place, the cycles counteract each other, dampening the effect on sea level that each would have had individually.

From 1980 to 2010, there were both negative and positive PDO phases in addition to El Niño and La Niña events. In fact, all four combinations of the two cycles could be observed at some point during this period. El Niño-positive PDO phase and La Niña-negative PDO phase alignments occurred in this time period, but were not seen in the previous 30 years. This increased the variability in sea level.

Whether this increased variability will continue is unclear, Song explained, because scientists do not yet understand exactly what triggers a change of phase in either cycle. "We are glad to have uncovered one more puzzle piece in the ongoing study of Pacific ocean variability," he said.