Distant Planet May Be on Its Second Atmosphere, NASA’s Hubble Finds 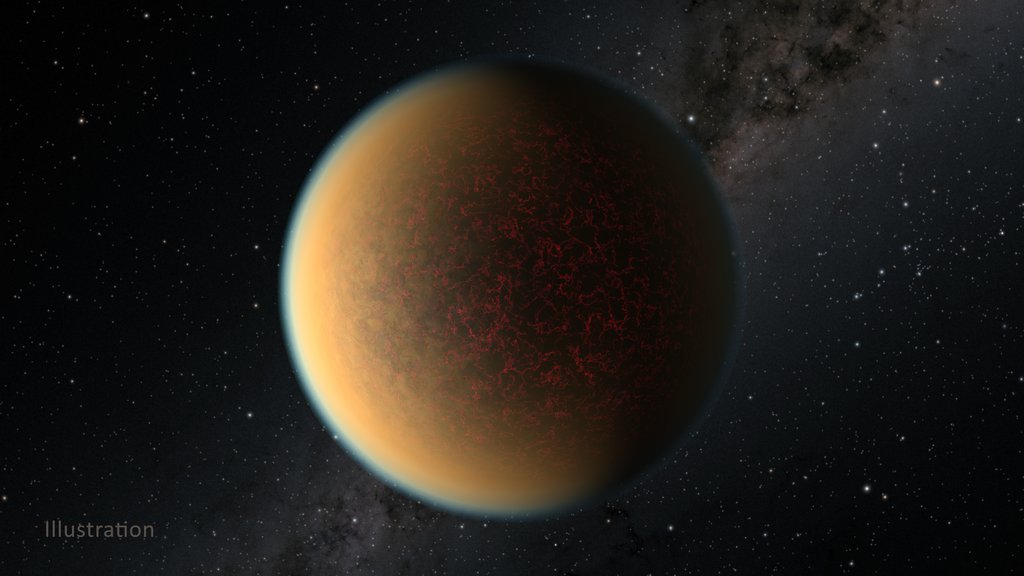 The hazy atmosphere of the Earth-size rocky exoplanet GJ 1132 b contains a toxic mix of hydrogen, methane, and hydrogen cyanide. These gasses may come from molten lava beneath the planet’s thin crust. The gravitational pull from another planet in the system likely fractures GJ 1132 b's surface to resemble a cracked eggshell. Credit: NASA/ESA/R. Hurt (IPAC/Caltech) Larger View 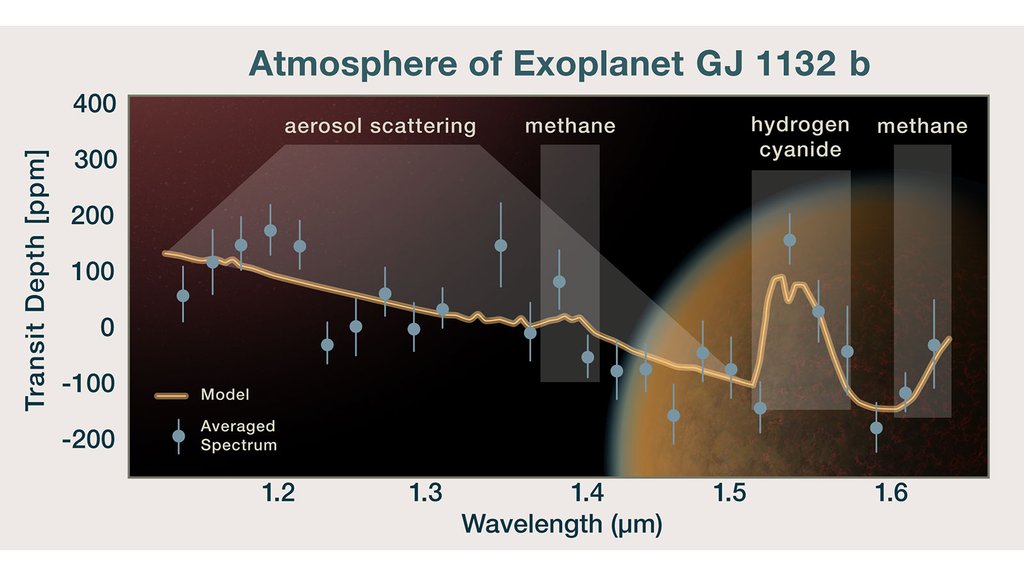 Transformed from a gaseous planet like Neptune to a hot, rocky world with a poisonous atmosphere, GJ 1132 b shows that planets can undergo drastic physical changes.

Scientists using NASA’s Hubble Space Telescope have found evidence that a planet orbiting a distant star may have lost its atmosphere but gained a second one through volcanic activity.

The planet, GJ 1132 b, is hypothesized to have begun as a gaseous world with a thick hydrogen blanket of atmosphere. Starting out at several times the diameter of Earth, this so-called “sub-Neptune” is believed to have quickly lost its primordial hydrogen and helium atmosphere due to the intense radiation of the hot, young star it orbits. In a short period of time, such a planet would be stripped down to a bare core about the size of Earth. That’s when things got interesting.

To the surprise of astronomers, Hubble observed an atmosphere which, according to their theory, is a “secondary atmosphere” that is present now. Based on a combination of direct observational evidence and inference through computer modeling, the team reports that the atmosphere consists of molecular hydrogen, hydrogen cyanide, methane and also contains an aerosol haze. Modeling suggests the aerosol haze is based on photochemically produced hydrocarbons, similar to smog on Earth.

Scientists interpret the current atmospheric hydrogen in GJ 1132 b as hydrogen from the original atmosphere which was absorbed into the planet’s molten magma mantle and is now being slowly released through volcanic processes to form a new atmosphere. The atmosphere we see today is believed to be continually replenished to balance the hydrogen escaping into space.

“It’s super-exciting because we believe the atmosphere that we see now was regenerated, so it could be a secondary atmosphere,” said study co-author Raissa Estrela of NASA’s Jet Propulsion Laboratory (JPL) in Southern California. “We first thought that these highly irradiated planets could be pretty boring because we believed that they lost their atmospheres. But we looked at existing observations of this planet with Hubble and said, ‘Oh no, there is an atmosphere there.’”

Scientists using NASA’s Hubble Space Telescope have found evidence that a planet orbiting a distant star that may have lost its atmosphere but gained a second one through volcanic activity.

The findings could have implications for other exoplanets, planets beyond our solar system.

“How many terrestrial planets don’t begin as terrestrials? Some may start as sub-Neptunes, and they become terrestrials through a mechanism that photo-evaporates the primordial atmosphere. This process works early in a planet’s life, when the star is hotter,” said lead author Mark Swain of JPL. “Then the star cools down and the planet’s just sitting there. So you’ve got this mechanism where you can cook off the atmosphere in the first 100 million years, and then things settle down. And if you can regenerate the atmosphere, maybe you can keep it.”

In some ways GJ 1132 b, located about 41 light-years from Earth, has tantalizing parallels to Earth, but in some ways it is very different. Both have similar densities, similar sizes, and similar ages, being about 4.5 billion years old. Both started with a hydrogen-dominated atmosphere, and both were hot before they cooled down. The team’s work even suggests that GJ 1132 b and Earth have similar atmospheric pressure at the surface.

But the planets have profoundly different formation histories. Earth is not believed to be the surviving core of a sub-Neptune. And Earth orbits at a comfortable distance from our Sun. GJ 1132 b is so close to its red dwarf star that it completes an orbit around its host star once every day and a half. This extremely close proximity keeps GJ 1132 b tidally locked, showing the same face to its star at all times – just as our Moon keeps one hemisphere permanently facing Earth.

“The question is, what is keeping the mantle hot enough to remain liquid and power volcanism?” asked Swain. “This system is special because it has the opportunity for quite a lot of tidal heating.”

Tidal heating is a phenomenon that occurs through friction, when energy from a planet’s orbit and rotation is dispersed as heat inside the planet. GJ 1132 b is in an elliptical orbit, and the tidal forces acting on it are strongest when it is closest to or farthest from its host star. At least one other planet in the host star’s system also gravitationally pulls on the planet.

The consequences are that the planet is squeezed or stretched through this gravitational “pumping.” That tidal heating keeps the mantle liquid for a long time. A nearby example in our own solar system is Jupiter’s moon Io, which has continuous volcanic activity due to a tidal tug-of-war from Jupiter and the neighboring Jovian moons.

Given GJ 1132 b’s hot interior, the team believes the planet’s cooler, overlying crust is extremely thin, perhaps only hundreds of feet thick. That’s much too feeble to support anything resembling volcanic mountains. Its flat terrain may also be cracked like an eggshell due to tidal flexing. Hydrogen and other gases could be released through such cracks.

NASA’s upcoming James Webb Space Telescope has the ability to observe this exoplanet. Webb’s infrared vision may allow scientists to see down to the planet’s surface. “If there are magma pools or volcanism going on, those areas will be hotter,” explained Swain. “That will generate more emission, and so they’ll be looking potentially at the actual geologic activity – which is exciting!”

The team’s findings will be published an upcoming issue of The Astronomical Journal.