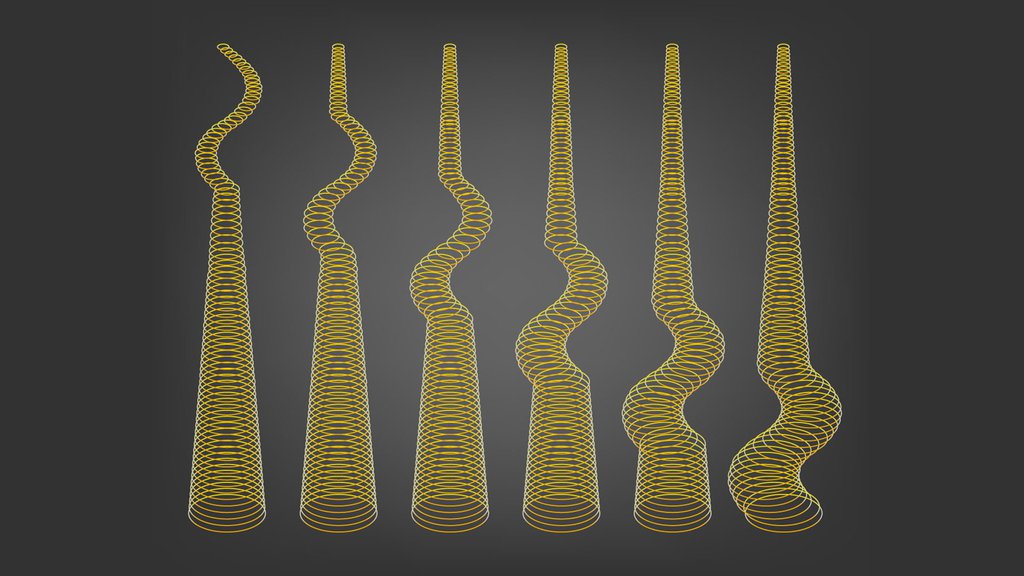 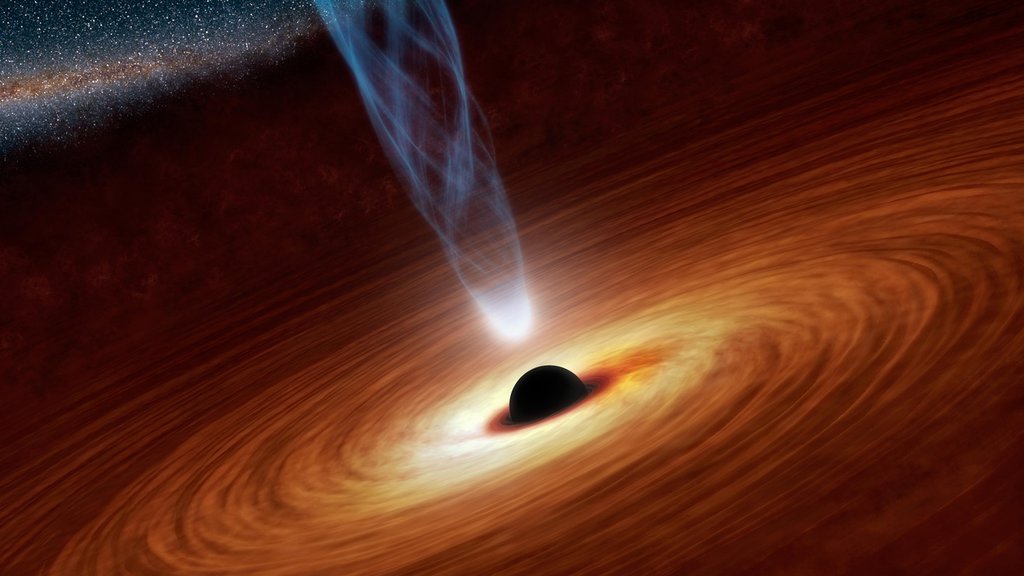 This artist's concept illustrates a supermassive black hole with millions to billions times the mass of our sun.› Full image and caption
Credit: NASA/JPL-Caltech

Magnetic waves from a black hole are set in motion as if a whip is being cracked.

› Black hole jets set magnetic waves in motion like whips being jerked from side to side.

Fast-moving magnetic waves emanating from a distant supermassive black hole undulate like a whip whose handle is being shaken by a giant hand, according to a new study using data from the National Radio Astronomy Observatory's Very Long Baseline Array. Scientists used this instrument to explore the galaxy/black hole system known as BL Lacertae (BL Lac) in high resolution.

"The waves are excited by a shaking motion of the jet at its base," said David Meier, a now-retired astrophysicist from NASA's Jet Propulsion Laboratory and the California Institute of Technology, both in Pasadena.

The team's findings, detailed in the April 10 issue of The Astrophysical Journal, mark the first time so-called Alfven (pronounced Alf-vain) waves have been identified in a black hole system.

Alfven waves are generated when magnetic field lines, such as those coming from the sun or a disk around a black hole, interact with charged particles, or ions, and become twisted or coiled into a helical shape. In the case of BL Lac, the ions are in the form of particle jets that are flung from opposite sides of the black hole at near light speed.

"Imagine running a water hose through a slinky that has been stretched taut," said first author Marshall Cohen, an astronomer at Caltech. "A sideways disturbance at one end of the slinky will create a wave that travels to the other end, and if the slinky sways to and fro, the hose running through its center has no choice but to move with it."

A similar thing is happening in BL Lac, Cohen said. The Alfven waves are analogous to the propagating sideways motions of the slinky, and as the waves propagate along the magnetic field lines, they can cause the field lines -- and the particle jets encompassed by the field lines -- to move as well.

It's common for black hole particle jets to bend -- and some even swing back and forth. But those movements typically take place on timescales of thousands or millions of years. "What we see is happening on a timescale of weeks," Cohen said. "We're taking pictures once a month, and the position of the waves is different each month."

"By analyzing these waves, we are able to determine the internal properties of the jet, and this will help us ultimately understand how jets are produced by black holes," said Meier.

Interestingly, from the vantage of astronomers on Earth, the Alfven waves emanating from BL Lac appear to be traveling about five times faster than the speed of light, but it's only an optical illusion. The illusion is difficult to visualize but has to do with the fact that the waves are traveling slightly off our line of sight at nearly the speed of light. At these high speeds, time slows down, which can throw off the perception of how fast the waves are actually moving.

Other Caltech authors on the paper include Talvikki Hovatta, a former Caltech postdoctoral scholar. Scientists from the University of Cologne and the Max Planck Institute for Radioastronomy in Germany; the Isaac Newton Institute of Chile; Aalto University in Finland; the Astro Space Center of Lebedev Physical Institute, the Pulkovo Observatory, and the Crimean Astrophysical Observatory in Russia; Purdue University in Indiana and Denison University in Granville, Ohio.