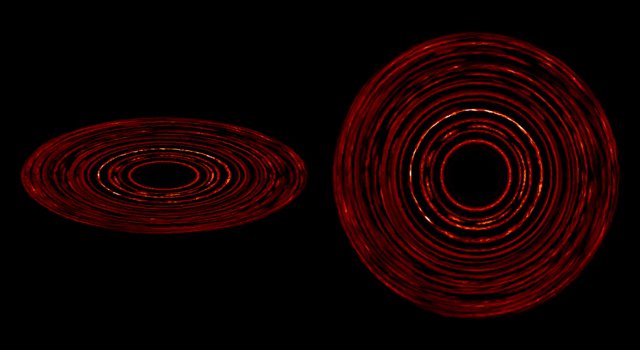 Debris disks around stars naturally form complex structures without the presence of a planet. This image shows the dust density and the growth of structure in a simulated disk, which extends about 100 times farther from its star than Earth's orbit around the sun. At left, the disk is seen from a 24-degree angle; at right, it's face-on. Lighter colors show greater dust concentrations.
Credit: NASA Goddard/JPL-Caltech

A NASA study shows that ring and spiral patterns in planet-forming disks form all on their own, without the need for planets.

Many young stars known to host planets also possess disks containing dust and icy grains, particles produced by collisions among asteroids and comets also orbiting the star. These debris disks often show sharply defined rings or spiral patterns, features that could signal the presence of orbiting planets. Astronomers study the disk features as a way to better understand the physical properties of known planets and possibly uncover new ones.

But a new study by NASA scientists sounds a cautionary note in interpreting rings and spiral arms as signposts for new planets. Thanks to interactions between gas and dust, a debris disk may, under the right conditions, produce narrow rings on its own -- no planets needed.

"When the mass of gas is roughly equal to the mass of dust, the two interact in a way that leads to clumping in the dust and the formation of patterns," said lead researcher Wladimir Lyra, a Sagan Fellow at NASA's Jet Propulsion Laboratory in Pasadena, Calif. "In essence, the gas shepherds the dust into the kinds of structures we would expect to be see if a planet were present."

A paper describing the findings was published in the July 11 issue of Nature.

The warm dust in debris disks is easy to detect at infrared wavelengths, but estimating the gas content of disks is a much greater challenge. As a result, theoretical studies tend to focus on the role of dust and ice particles, paying relatively little attention to the gas component. Yet icy grains evaporate and collisions produce both gas and dust, so at some level all debris disks must contain some amount of gas.

"All we need to produce narrow rings and other structures in our models of debris disks is a bit of gas, too little for us to detect today in most actual systems," said co-author Marc Kuchner, an astrophysicist at NASA's Goddard Space Flight Center in Greenbelt, Md.

Here's how it works. When high-energy ultraviolet light from the central star strikes a clump of dust and ice grains, it drives electrons off the particles. These high-speed electrons then collide with and heat nearby gas.

The rising gas pressure changes the drag force on the orbiting dust, causing the clump to grow and better heat the gas. This interaction, which the astronomers refer to as the photoelectric instability, continues to cascade. Clumps grow into arcs, rings and oval features in tens of thousands of years, a relatively short time compared to other forces at work in a young solar system.

A model developed by Lyra and Kuchner shows the process at work.

"We were fascinated to watch this structure form in the simulations," Lyra said. "Some of the rings begin to oscillate, and at any moment they have the offset appearance of dust rings we see around many stars, such as Fomalhaut."

In addition, dense clumps with many times the dust density elsewhere in the disk also form during the simulation. When a clump in a ring grows too dense, the ring breaks into arcs and the arcs gradually shrink until only a single compact clump remains. In actual debris disks, some of these dense clumps could reflect enough light to be directly observable.

"We would detect these clumps as bright moving sources of light, which is just what we're looking for when we search for planets," adds Kuchner.

The researchers conclude that the photoelectric instability provides a simple and plausible explanation for many of the features found in debris disks, making the job of planet-hunting astronomers just a little bit harder.

An abstract for the Nature paper, titled "Sharp Eccentric Rings in Planetless Hydrodynamical Models of Debris Disks," is online at http://dx.doi.org/10.1038/nature12281 .

The Sagan Fellowship Program is administered by the NASA Exoplanet Science Institute at the California Institute of Technology in Pasadena. Its purpose is to advance the scientific and technical goals of NASA's Exoplanet Exploration Program, managed for NASA by JPL. Caltech manages JPL for NASA.