Descent into a Frozen Underworld 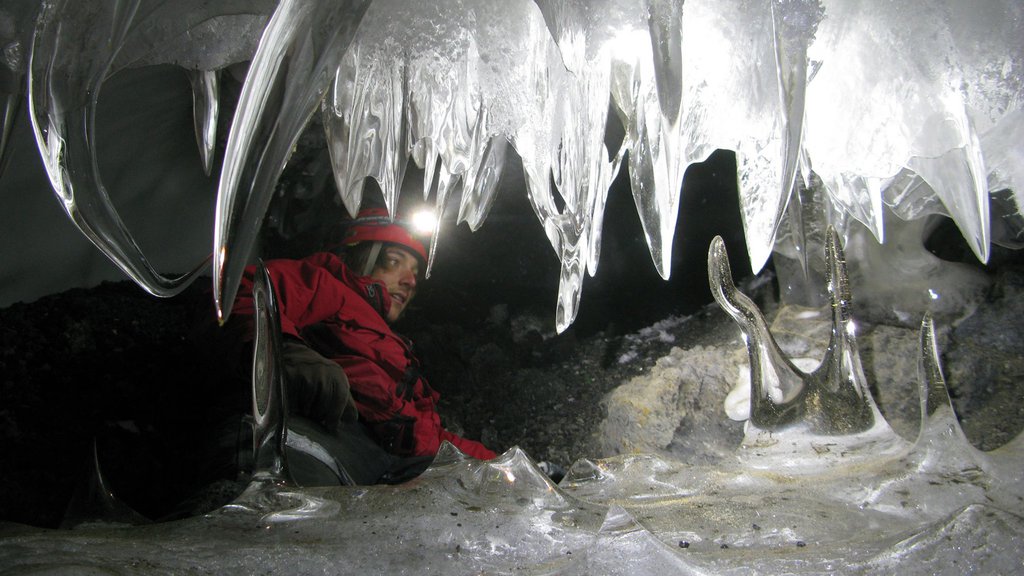 Aaron Curtis, a postdoctoral scholar at JPL, traveled to Antarctica this past December, where he tested robots and instruments designed for icy worlds like Europa.
Credit: Nial Peters 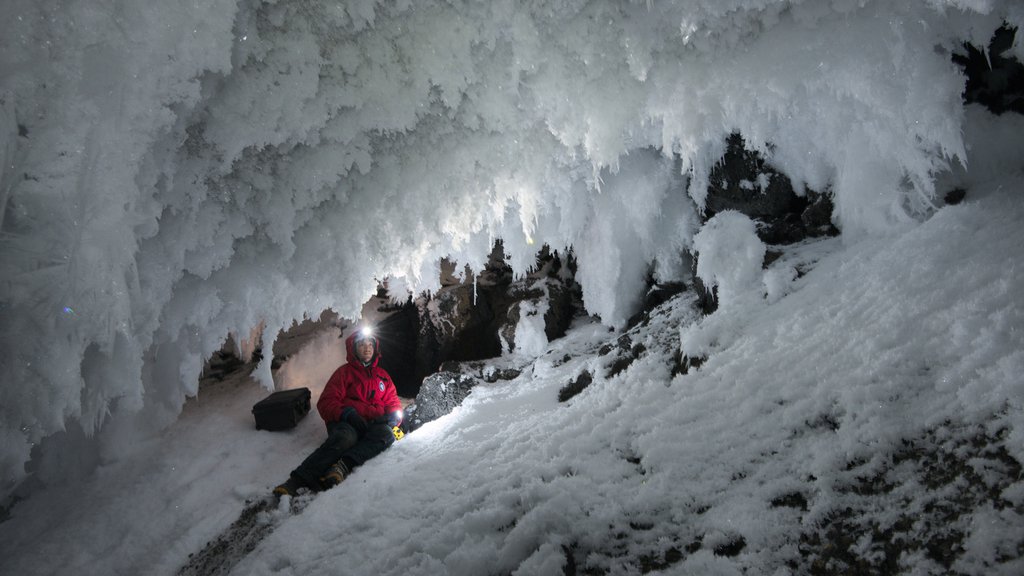 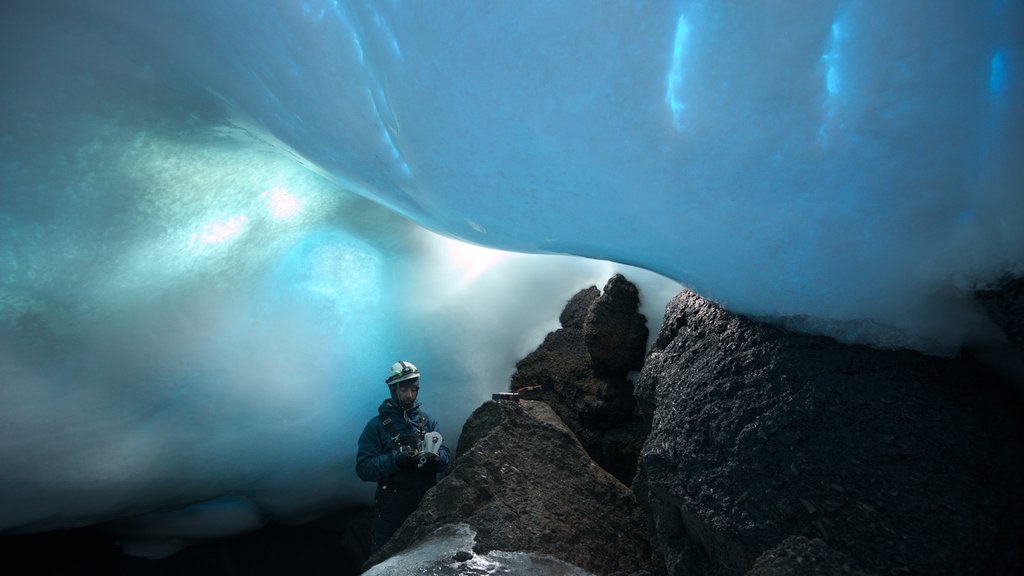 Aaron Curtis, a post-doctoral scholar at JPL, measures gases inside an ice cave. Carbon dioxide levels can be especially high inside the caves, so gas monitors are necessary for safety.
Credit: Dylan Taylor 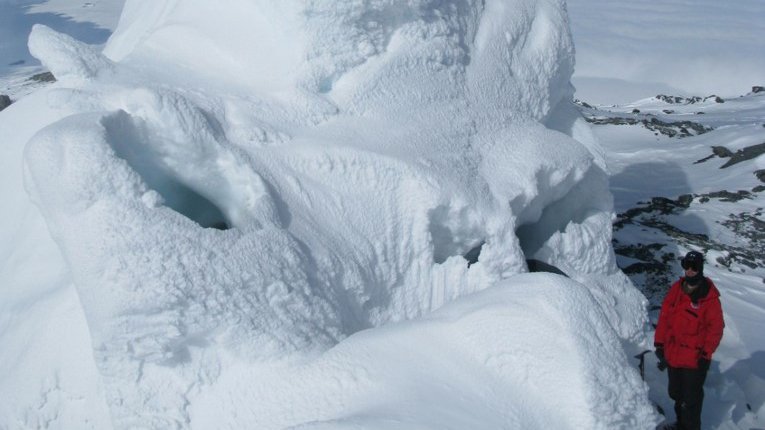 Aaron Curtis, a postdoctoral scholar at JPL, stands next to an ice tower. These towers form over caves as gases escape and freeze in the open air.
Credit: Nial Peters

A JPL robotics researcher tested new technologies in ice caves near an active volcano in Antarctica.

Mt. Erebus is at the end of our world -- and offers a portal to another.

It's our planet's southernmost active volcano, reaching 12,448 feet (3,794 meters) above Ross Island in Antarctica. Temperatures at the surface are well below freezing most of the year, but that doesn't stop visits from scientists: Erebus is also one of the few volcanoes in the world with an exposed lava lake. You can peer over the lip of its main crater and stare straight into it.

It's also a good stand-in for a frozen alien world, the kind NASA wants to send robots to someday. That's why Aaron Curtis, a post-doctoral scholar at NASA's Jet Propulsion Laboratory, Pasadena, California, spent the month of December exploring ice caves beneath the volcano. For several weeks, he tested robots, a drill and computer-aided mapping technology that could one day help us understand the icy worlds in our outer solar system.

It was Curtis' seventh visit to Mt. Erebus, which he made on behalf of both JPL and the Mt. Erebus Volcano Observatory. He traveled with several colleagues who were studying everything from the age of the rocks to the composition of gasses emitted from the lava lake.

Ocean worlds like Europa are sure to be distinctly more alien than Erebus. Europa's temperatures are hundreds of degrees below freezing; its ice is certain to be different than that of Earth's; its surface is bathed in Jupiter's radiation.

But there are some similarities that make Erebus a good testing ground for future technologies.

"We think some features of these caves are similar to what you might see on a moon like Europa," Curtis said.

For the ancient Greeks, Erebus was an entrance to the underworld. It's a fitting namesake: scientists have discovered that Mt. Erebus has its own underworld -- though one of stunning beauty.

The volcano's gases have carved out massive caves, which are filled with forests of hoarfrost and cathedral-like ice ceilings. Curtis said the heat from Erebus keeps the caves cozy -- close to 32 degrees Fahrenheit (0 degrees Celsius) -- and drives warm gases out of vents at the surface, where they freeze into towers. Within the caves, the mixing of warm and cold air forms icy "chimneys" that reach toward the ground.

While pursuing his doctorate at the New Mexico Institute of Mining and Technology, Curtis wrote his dissertation on the formation of these caves. He said that in recent years, scientists have also discovered a diverse array of microscopic organisms living in their interior. These extremophiles, as they're known, suggest that life might be possible on distant planets with similar cave systems.

Tools for an Icy Moon

Curtis joined JPL's Extreme Environments Robotics Group in 2016, where engineers are developing nimble machines that can climb, scurry and rove across difficult terrain.

Aaron Parness, manager of the Robotic Prototyping Lab, said Mt. Erebus was a good testing ground for some of the robots and instruments in development. When a member of the group is conducting field research, they often test each other's work. It's part of the rapid design prototyping that steers the group's efforts.

"Field testing shows you things that are hard to learn in the laboratory," Parness said. "We jump on those opportunities. Even if the prototype isn't ready to work perfectly, it doesn't mean it isn't ready to teach us lessons on how to make the next iteration better."

Curtis tested several unique projects at Mt. Erebus. There was the Ice Screw End Effector (ISEE), a kind of ice drill designed for the "feet" of a wall-climbing robot called LEMUR. The drill would allow LEMUR to attach itself to walls, while also pulling out samples of the ice with each step. Future designs might be able to check for chemical signs of life within these samples.

ISEE hadn't seen much field testing before this trip -- just the ice growing inside a fridge at JPL.

"We're trying to get a feel for what kind of ice this drill works in," Curtis said. He added that ice can be plastic or brittle depending on different densities, humidity and other factors. The ice caves under Erebus proved to have much higher concentrations of air than expected: "The differences involved can be like trying to climb a marshmallow versus a light metal."

Another test was for PUFFER, an origami-inspired robot that can sit flat during storage and "puff up" to explore a wider area. PUFFER has driven extensively around JPL, in Pasadena's Arroyo Seco and other desert environments -- but not on snow. Curtis joysticked the robot around using newly designed snow wheels, which have a broad, flat surface.

Another tool that that could be helpful for future explorers is a structured light sensor used for creating 3-D cave maps. JPL's Jeremy Nash and Renaud Detry provided the sensor, which relies on computer vision to map the interior of a cave.

Curtis said that ice is a hard material to 3-D model, in large part because it's so reflective. Light has a tendency to bounce off its surface, making it difficult for a computer to read that data and reconstruct a space.

"Ice sparkles, and the sparkly crystals look different from each angle," Curtis said. "It's like a hall of mirrors."

A helicopter brings in supplies to Lower Erebus Hut, a camp at 11,000 feet. The camp is considered the main base of operations that scientists work out of. Image Credit: Dylan Taylor
› Larger view

Make no mistake about it -- a research trip to Mt. Erebus isn't exactly a vacation.

Curtis and his colleagues faced three large blizzards during their trip, each lasting around a week. That led to travel delays when supply helicopters couldn't make safe passage.

The team also dealt with limited energy in a region that experiences six months of night, blocking out sunlight for solar cells. Wind turbines on the volcano are the most common form of energy, though they face their own challenges: frost builds up on the blades, causing them to vibrate themselves to bits.

But the chance to conduct research in such a desolate and awe-inspiring location is hard to pass up.

"When I smell that hydrogen sulfide perfuming the minus-25-degrees-Celsius air, there's nowhere I'd rather be," Curtis said.