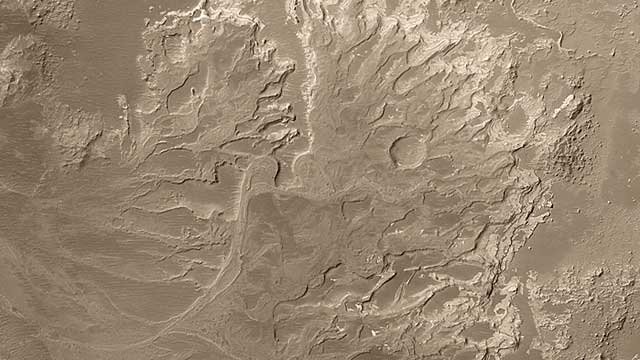 Newly seen details in a fan-shaped apron of debris on Mars may help settle a decades-long debate about whether the planet had long-lasting rivers instead of just brief, intense floods.

Newly seen details in a fan-shaped apron of debris on Mars may help settle a decades-long debate about whether the planet had long-lasting rivers instead of just brief, intense floods.

Pictures from NASA's Mars Global Surveyor orbiter show eroded ancient deposits of transported sediment long since hardened into interweaving, curved ridges of layered rock. Scientists interpret some of the curves as traces of ancient meanders made in a sedimentary fan as flowing water changed its course over time.

"The shape of the fan and the pattern of inverted channels in it suggest it may have been a real delta, a deposit made where a river enters a body of water," he said. "If so, it would be the strongest indicator yet Mars once had lakes."

Malin and Dr. Ken Edgett, also of Malin Space Science Systems, have published pictures and analysis of the landform in today's online edition of Science Express. The images with captions are available online from the Mars Orbiter Camera team, at http://www.msss.com/mars_images/moc/2003/11/13/ and from NASA's Jet Propulsion Laboratory, Pasadena, Calif., at http://photojournal.jpl.nasa.gov/catalog/PIA04869.

The fan covers an area about 13 kilometers (8 miles) long and 11 kilometers (7 miles) wide in an unnamed southern hemisphere crater downslope from a large network of channels that apparently drained into it billions of years ago.

"This latest discovery by the intrepid Mars Global Surveyor is our first definitive evidence of persistent surface water," commented Dr. Jim Garvin, NASA's Lead Scientist for Mars Exploration, NASA Headquarters, Washington, D.C. "It reaffirms we are on the right pathway for searching the record of martian landscapes and eventually rocks for the record of habitats. Such localities may serve as key landing sites for future missions, such as the Mars Science Laboratory in 2009," continued Garvin. "These astounding findings suggest that "following the water" with Mars Global Surveyor, Mars Odyssey, and soon with the Mars Exploration Rovers, is a powerful approach that will ultimately allow us to understand the history of habitats on the red planet."

No liquid water has been detected on Mars, although one of the previous major discoveries from Mars Global Surveyor pictures suggests that some gullies have been cut in geologically recent times by the flow of ephemeral liquid water. Another NASA orbiter, Mars Odyssey, has discovered extensive deposits of near-surface ice at high latitudes. Mars' atmosphere is now so thin that, over most of the planet, any liquid water at the surface would rapidly evaporate or freeze, so evidence of persistent surface water in the past is also evidence for a more clement past climate.

Malin and Edgett estimate that the volume of material in the delta-like fan is about one-fourth the volume of what was removed by the cutting of the upstream channels. Their analysis draws on information from Mars Global Surveyor's laser altimeter and from cameras on Mars Odyssey and NASA's Viking Orbiter, as well as images from the Mars Orbiter Camera.

"Because the debris in this fan is now cemented, it shows that some sedimentary rocks on Mars were deposited by water," Edgett said. "This has been suspected, but never so clearly demonstrated before."

The camera on Mars Global Surveyor has returned more than 155,000 pictures since the spacecraft began orbiting Mars on Sept. 12, 1997. Still, its high-resolution images cover only about three percent of the planet's surface. Information about Mars Global Surveyor is available on the Internet at http://mars.jpl.nasa.gov/mgs.