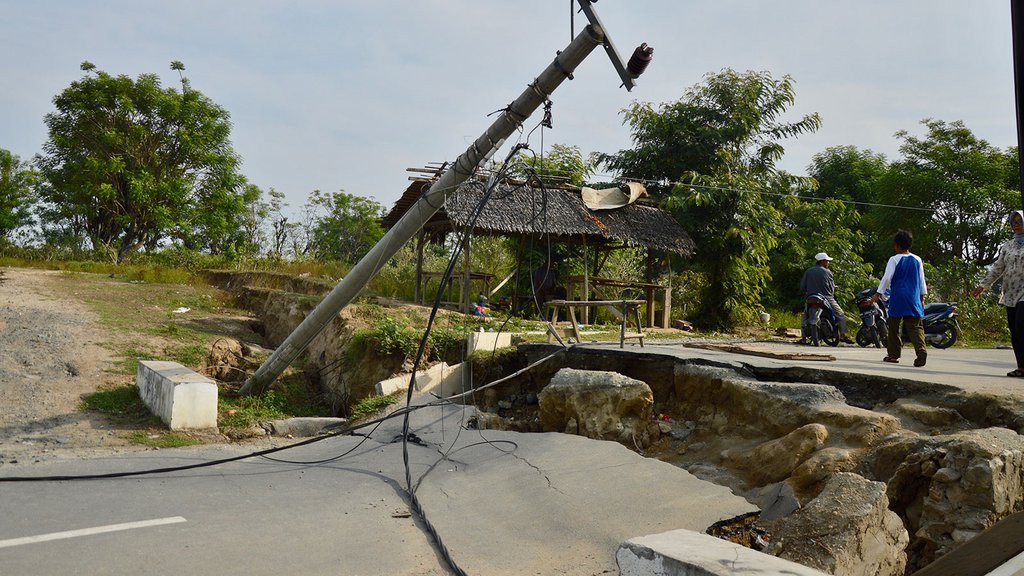 A small section of the ruptured fault from the Palu earthquake.
Credit: © 2018 European Union/Pierre Prakash/CC BY-NC-ND 2.0

The Palu earthquake moving south from its epicenter (red star). The fault is shown in red. Dots indicate sources of high-frequency seismic waves generated by the unusually fast rupture passing by. The graph shows time and distance of each source from the epicenter.
Credit: UCLA

The extreme speed of last fall's Indonesian earthquake - rupturing faster than 9,000 mph (14,500 kph) - created a sort of 'seismic boom' that intensified the shaking.

Last September's major earthquake near Palu City on the Indonesian island of Sulawesi was a rare supershear event, a new study has found. Fewer than 15 of these superfast-moving, extra-powerful earthquakes have ever been identified.

In these events the rupture, or propagating crack, moves along a fault extremely rapidly, causing the up-and-down or side-to-side waves that shake the ground - called seismic shear waves - to pile up and intensify. The result is much stronger shaking than in a slower quake.

Researchers at UCLA; NASA's Jet Propulsion Laboratory in Pasadena, California; and other institutions analyzed high-spatial-resolution observations of the seismic waves caused by the devastating temblor, along with satellite radar and optical images,to characterize the speed, timing and extent of the magnitude 7.5 Palu earthquake that occurred on Sept. 28, 2018. They calculated that the quake ruptured at a steady speed of 9,171 mph (14,760 kph), with the main shock continuing for almost a minute. Earthquakes typically rupture at about 5,600 to 6,700 mph (9,000 to 10,800 kph). Processing the satellite images, the researchers found that the two sides of the 93-mile-long (150-kilometer-long) fault slipped by about 16 feet (5 meters) - a surprisingly large amount.

A rupturing fault creates several kinds of waves in the ground, including shear waves that spread out at 7,900 mph (12,700 kph). In a supershear earthquake, the fast-moving rupture overtakes the slower shear waves propagating in front of it and pushes them together into bigger, more powerful waves. "The intense shaking [that results] is similar to the sonic boom associated with a supersonic jet," said Lingsen Meng, a professor at UCLA and co-author of the report.

The consistent speed of the Palu rupture was surprising, considering the nature of the fault itself. Previously studied supershear earthquakes occurred on faults that were remarkably straight, offering few obstacles to the earthquakes' motion. Satellite images of the Palu fault, however, revealed that it had at least two large bends. The rupture maintained a steady speed around these bends.

That challenges scientists' models of earthquake rupture, according to senior corresponding author Jean-Paul Ampuero of the Université Côte d'Azur in Nice, France. However, Ampuero said, these models were developed for idealized faults in homogeneous material. "Real faults are surrounded by rocks that have been fractured and softened by previous earthquakes," he said. "In theory, speeds that would be unexpected in intact rocks can happen in damaged rocks."

The scientists analyzed synthetic aperture radar data from the Japan Aerospace Exploration Agency's ALOS-2 satellite; optical image data from the Copernicus Sentinel-2A and -2B satellites, operated by the European Space Agency; and optical images from the Planet Labs PlanetScope satellite constellation, managed by Planet Labs in San Francisco. Both space agencies and Planet Labs reprogrammed their satellites immediately after the quake to acquire more images of central Sulawesi island to help with research, allowing the team to produce a comprehensive analysis.

The study is titled "Early and Persistent Supershear Rupture of the 2018 Magnitude 7.5 Palu Earthquake."