Five years ago, astronomers revealed a spectacular collection of other worlds: the TRAPPIST-1 system.

This illustration shows what the TRAPPIST-1 planetary system may look like, based on available data about the planets’ diameters, masses, and distances from the host star. Astronomers have named them the planets TRAPPIST-1b, TRAPPIST-1c, and so forth. Credit: NASA/JPL-Caltech

Newspapers around the world printed the discovery on their front pages: Astronomers had found that a red dwarf star called TRAPPIST-1 was home to a close-knit family of seven Earth-size planets. NASA announced the system Feb. 22, 2017.

Using telescopes on the ground and in space, scientists revealed one of the most unusual planetary systems yet found beyond our Sun and opened the tantalizing question: Are any of these worlds habitable – a suitable home for life?

Five years later, the planets are still enigmatic. Since the first announcement, subsequent studies have revealed that the TRAPPIST-1 planets are rocky, that they could be almost twice as old as our solar system, and that they are located 41 light-years from Earth.

But a real game-changer will be the recently launched James Webb Space Telescope. Larger and more powerful than any previous space telescope, Webb will look for signs of atmospheres on the TRAPPIST-1 planets.

“That folks are even able to ask the question about whether a planet around another star is habitable – that just boggles my mind,” said Sean Carey, manager of the Exoplanet Science Institute at NASA’s Jet Propulsion Laboratory in Southern California. Carey was part of the team that helped discover some of the TRAPPIST-1 planets using data from the now-retired Spitzer Space Telescope.

Explore the TRAPPIST-1 system using NASA’s Eyes on Exoplanets interactive visualization, where you can view each planet illustration up close. Credit: NASA/JPL-Caltech

A prime target for Webb is the fourth planet from the star, called TRAPPIST-1e. It’s right smack in the middle of what scientists call the habitable zone, also known as the Goldilocks zone. This is the orbital distance from a star where the amount of heating is right to allow liquid water on the surface of a planet.

Though the planets are tightly packed around TRAPPIST-1, the red dwarf star is not only far cooler than our Sun, it is less than 10% its size. (In fact, if the entire system were placed in our own solar system, it would fit within the orbit of our innermost planet, Mercury.)

The habitable zone is just a first cut. A potentially habitable planet also would require a suitable atmosphere, and Webb, especially in its early observations, is likely to gain only a partial indication of whether an atmosphere is present.

“What is at stake here is the first atmosphere characterization of a terrestrial Earth-size planet in the habitable zone,” said Michaël Gillon, an astronomer at the University of Liege in Belgium and the lead author of the study that revealed the seven sibling planets in 2017.

Measurements with the Hubble Space Telescope added more information about habitability. While Hubble does not have the power to determine whether the planets possess potentially habitable atmospheres, it did find that at least three of the planets – d, e, and f – do not appear to have the puffy, hydrogen-dominated atmospheres of gas giants, such as Neptune, in our solar system. Such planets are thought to be less likely to support life.

That leaves open the possibility of “the atmospheres’ potential to support liquid water on the surface,” said Nikole Lewis, a planetary scientist at Cornell University.

Lewis is part of a science team that will use the Webb telescope, which will view the heavens in infrared light, to hunt for signs of an atmosphere on TRAPPIST-1e, the one with the Goldilocks perch in the habitable zone. 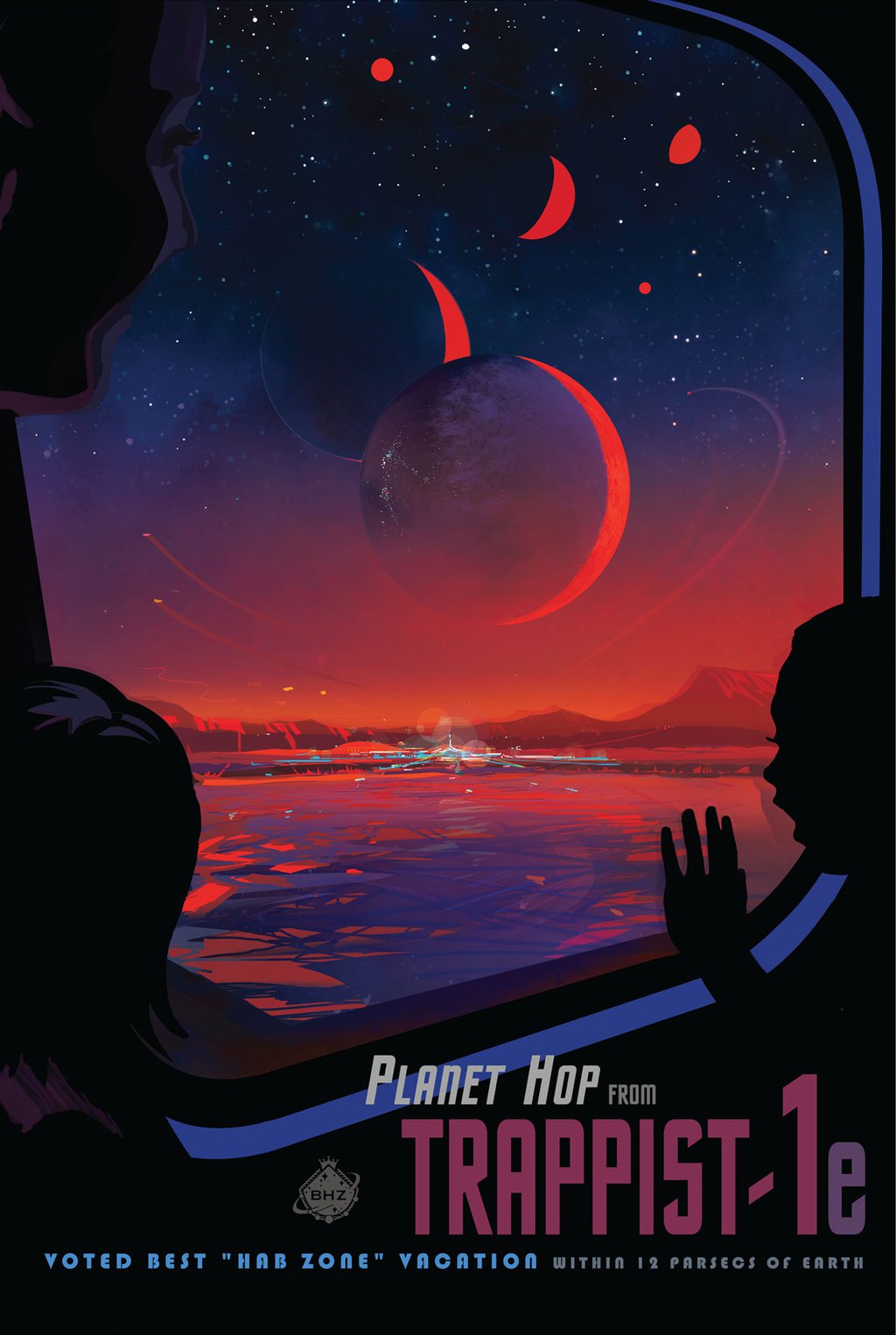 You won’t be able to visit TRAPPIST-1 e any time soon, but you can imagine the sojourn with this free downloadable travel poster. It’s from a series of travel posters from JPL that imagine virtual trips to 14 alien worlds. Credit: NASA/JPL-Caltech

“The hope is that we see carbon dioxide, a really strong feature, right at the wavelengths [detectable by] Webb,” she said. “Once we know where there are little things peaking up above the noise, we can go back and do a much higher resolution look in that area.”

The size of the TRAPPIST-1 planets also might help to strengthen the case for habitability, though the research is far from conclusive.

They’re comparable to Earth not just in diameter but mass. Narrowing down the mass of the planets was possible, thanks to their tight bunching around TRAPPIST-1: Packed shoulder to shoulder, they jostle one another, enabling scientists to compute their likely range of mass from those gravitational effects.

“We have gotten some really good information about their size – mass and radius,” said Cornell’s Lewis. “That means we know about their densities.”

Scientists use computer models of possible planetary atmosphere formation and evolution to try to narrow down their possible composition, and these will be critical for the TRAPPIST-1 planets, Lewis said.

“The great thing about the TRAPPIST system is that it is going to allow us to refine those models either way – whether they will end up being just barren rock or end up being potentially habitable worlds,” she said.

For Gillon, another great thing about the system is the reach of the TRAPPIST-1 system. “I’ve seen TRAPPIST-1 included in some artistic works; I’ve seen it in music, sci-fi novels, comics,” he said. “That’s really something we have enjoyed during these five years. It’s like this system has a life of its own.”