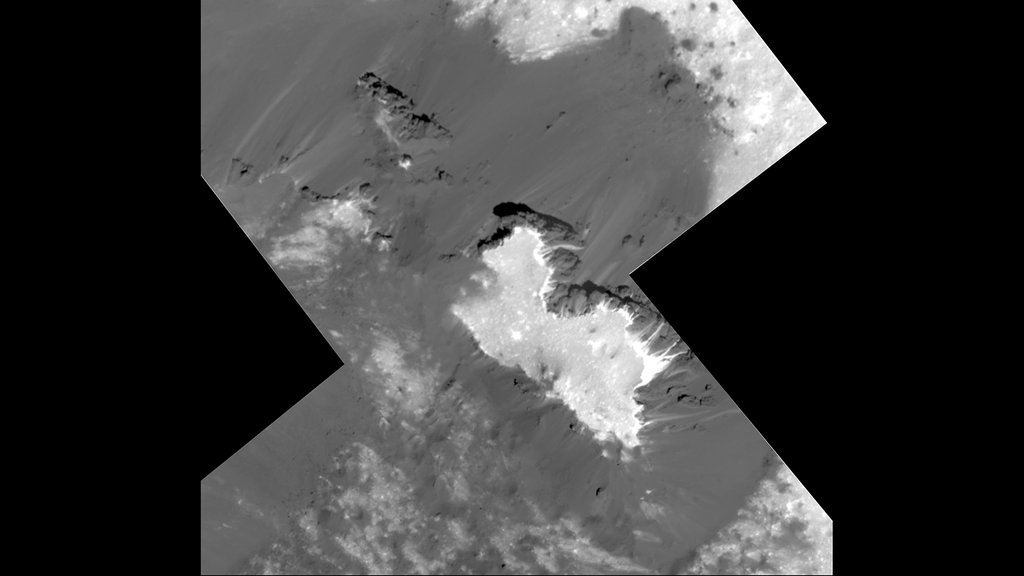 This mosaic of a prominent mound located on the western side of Cerealia Facula was obtained by NASA's Dawn spacecraft on June 22, 2018 from an altitude of about 21 miles (34 kilometers).› Full image and caption
Credit: NASA/JPL-Caltech/UCLA/MPS/DLR/IDA 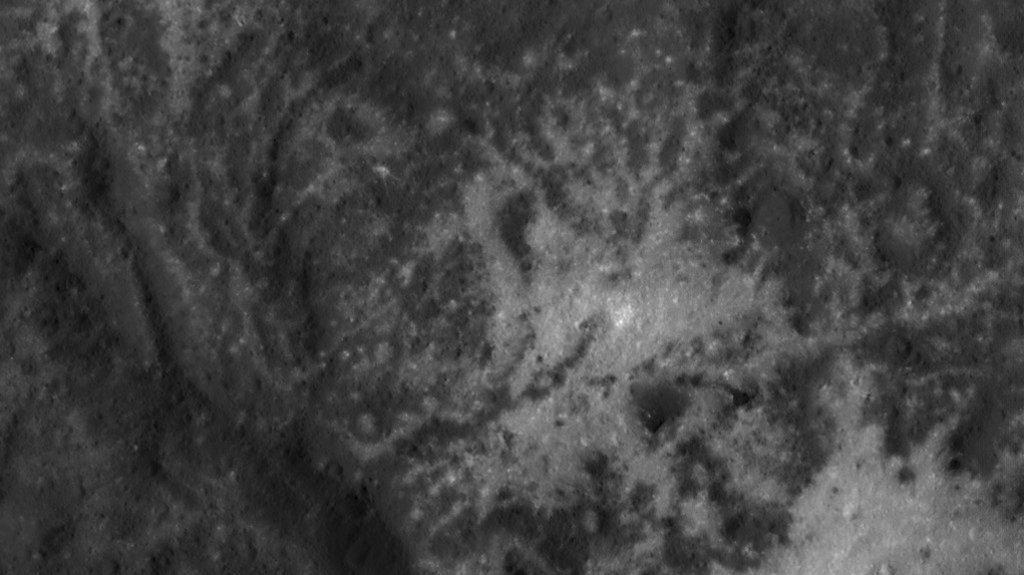 This close-up image of the Vinalia Faculae in Occator Crater was obtained by NASA's Dawn spacecraft on June 14, 2018 from an altitude of about 24 miles (39 kilometers).› Full image and caption
Credit: NASA/JPL-Caltech/UCLA/MPS/DLR/IDA

The flight team maneuvered the spacecraft into an orbit that dives 22 miles (35 kilometers) above the surface of Ceres and viewed Occator Crater, site of the famous bright deposits, and other intriguing regions. In more than three years of orbiting Ceres, Dawn's lowest altitude before this month was 240 miles (385 kilometers), so the data from this current orbit bring the dwarf planet into much sharper focus.

These low orbits have revealed unprecedented details of the relationships between bright and dark materials in the region of Vinalia Faculae. Dawn's visible and infrared mapping spectrometer had previously found the bright deposits to be made of sodium carbonate, a material commonly found in evaporite deposits on Earth. Last week Dawn fired its ion engine, possibly for the final time, to fly nearer Cerealia Facula, the large deposit of sodium carbonate in the center of Occator Crater.

"Acquiring these spectacular pictures has been one of the greatest challenges in Dawn's extraordinary extraterrestrial expedition, and the results are better than we had ever hoped," said Dawn's chief engineer and project manager, Marc Rayman, of NASA's Jet Propulsion Laboratory, Pasadena, California. "Dawn is like a master artist, adding rich details to the otherworldly beauty in its intimate portrait of Ceres."

The wealth of information contained in these images, and more that are planned in the coming weeks, will help address key, open questions about the origin of the faculae, the largest deposits of carbonates observed thus far outside Earth, and possibly Mars. In particular, scientists have been wondering how that material was exposed, either from a shallow, sub-surface reservoir of mineral-laden water, or from a deeper source of brines (liquid water enriched in salts) percolating upward through fractures.

And the low-altitude observations obtained with Dawn's other instruments, a gamma ray and neutron detector and a visible and infrared mapping spectrometer, will reveal the composition of Ceres at finer scale, shedding new light on the origin of the materials found across Ceres' surface. New gravity measurements also may reveal details of the subsurface.

"The first views of Ceres obtained by Dawn beckoned us with a single, blinding bright spot," said Carol Raymond of JPL, Dawn's principal investigator. "Unraveling the nature and history of this fascinating dwarf planet during the course of Dawn's extended stay at Ceres has been thrilling, and it is especially fitting that Dawn's last act will provide rich new data sets to test those theories."