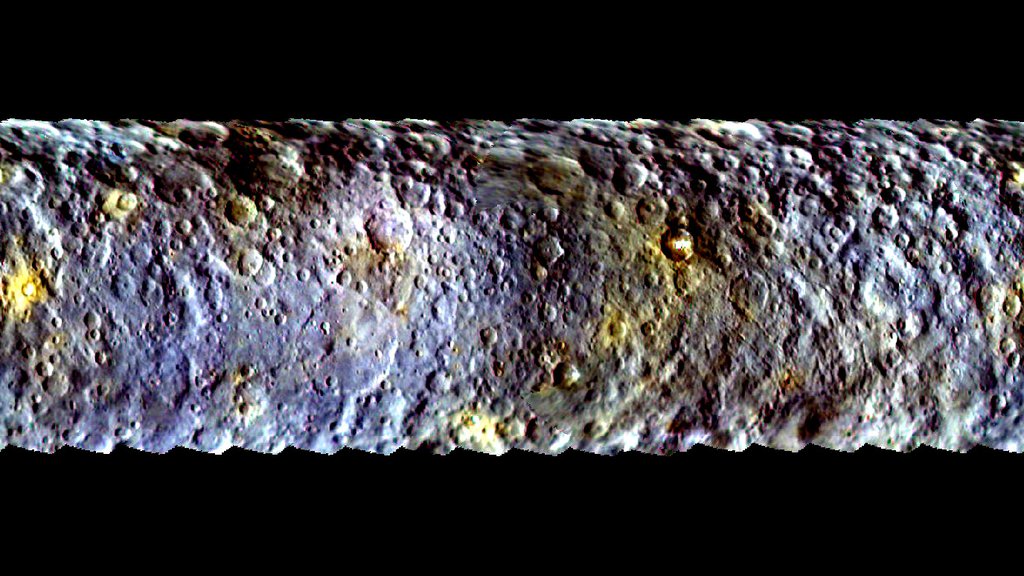 This map-projected view of Ceres was created from images taken by NASA's Dawn spacecraft during its initial approach to the dwarf planet, prior to being captured into orbit in March 2015.› Full image and caption
Credit: NASA/JPL-Caltech/UCLA/MPS/DLR/IDA 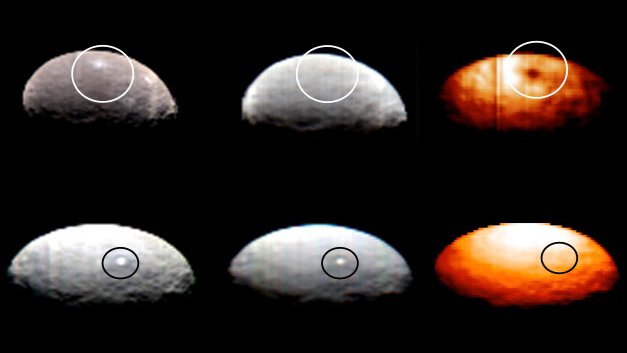 A new color map of dwarf planet Ceres, which NASA's Dawn spacecraft has been orbiting since March, reveals the diversity of the surface of this planetary body.

A new color map of dwarf planet Ceres, which NASA's Dawn spacecraft has been orbiting since March, reveals the diversity of the surface of this planetary body. Differences in morphology and color across the surface suggest Ceres was once an active body, Dawn researchers said today at the 2015 General Assembly of the European Geosciences Union in Vienna.

"This dwarf planet was not just an inert rock throughout its history. It was active, with processes that resulted in different materials in different regions. We are beginning to capture that diversity in our color images," said Chris Russell, principal investigator for the Dawn mission, based at the University of California, Los Angeles.

The Dawn mission made history on March 6 as the first spacecraft to reach a dwarf planet, and the first spacecraft to orbit two extraterrestrial targets. Previously, Dawn studied giant asteroid Vesta from 2011 to 2012, uncovering numerous insights about its geology and history. While Vesta is a dry body, Ceres is believed to be 25 percent water ice by mass. By comparing Vesta and Ceres, scientists hope to gain a better understanding of the formation of the solar system.

Ceres' surface is heavily cratered, as expected, but appears to have fewer large craters than scientists anticipated. It also has a pair of very bright neighboring spots in its northern hemisphere. More detail will emerge after the spacecraft begins its first intensive science phase on April 23, from a distance of 8,400 miles (13,500 kilometers) from the surface, said Martin Hoffmann, investigator on the Dawn framing camera team, based at the Max Planck Institute for Solar System Research, Göttingen, Germany.

The visible and infrared mapping spectrometer (VIR), an imaging spectrometer that examines Ceres in visible and infrared light, has been examining the relative temperatures of features on Ceres' surface. Preliminary examination suggests that different bright regions on Ceres' surface behave differently, said Federico Tosi, investigator from the VIR instrument team at the Institute for Space Astrophysics and Planetology, and the Italian National Institute for Astrophysics, Rome.

Based on observations from NASA's Hubble Space Telescope, planetary scientists have identified 10 bright regions on Ceres' surface. One pair of bright spots, by far the brightest visible marks on Ceres, appears to be located in a region that is similar in temperature to its surroundings. But a different bright feature corresponds to a region that is cooler than the rest of Ceres' surface.

The origins of Ceres' bright spots, which have captivated the attention of scientists and the public alike, remain unknown. It appears the brightest pair is located in a crater 57 miles (92 kilometers) wide. As Dawn gets closer to the surface of Ceres, better-resolution images will become available.

"The bright spots continue to fascinate the science team, but we will have to wait until we get closer and are able to resolve them before we can determine their source," Russell said.

Both Vesta and Ceres are located in the main asteroid belt between Mars and Jupiter. The Dawn spacecraft will continue studying Ceres through June 2016.