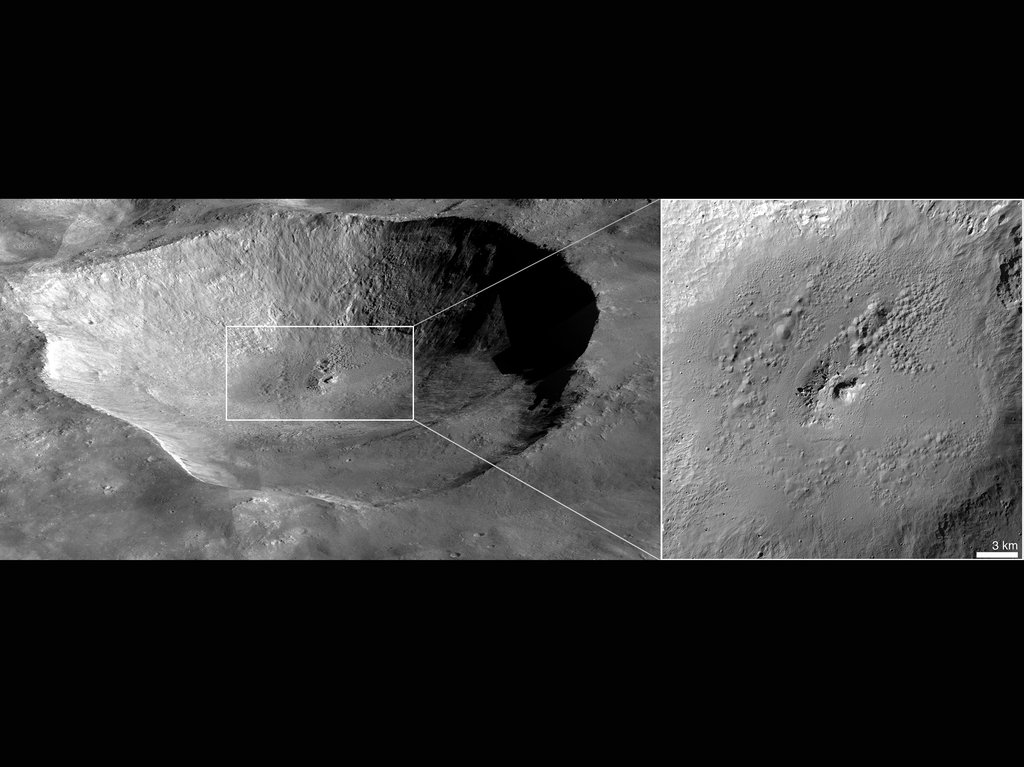 This perspective view of Marcia crater on the giant asteroid Vesta shows the most spectacularly preserved example of "pitted terrain," an unexpected discovery in data returned by NASA's Dawn mission.› Full image and caption
Credit: NASA/JPL-Caltech/UCLA/MPS/DLR/IDA/JHUAPL 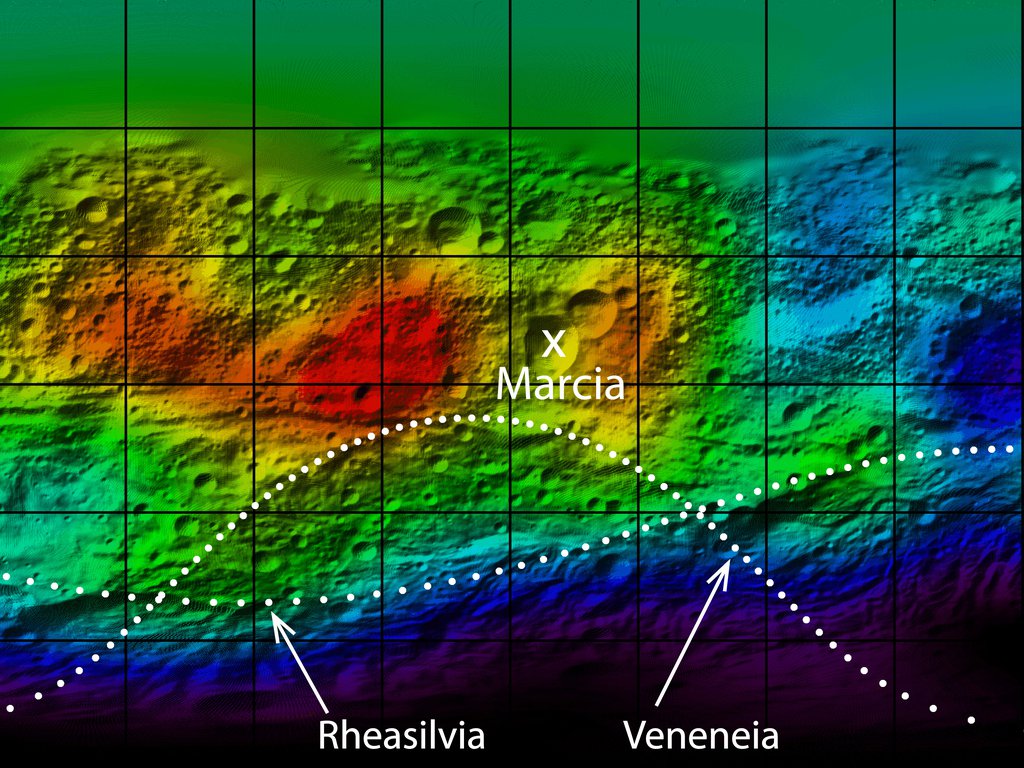 This map from NASA's Dawn mission shows the global distribution of hydrogen on the surface of the giant asteroid Vesta.› Full image and caption
Credit: NASA/JPL-Caltech/UCLA/PSI/MPS/DLR/IDA 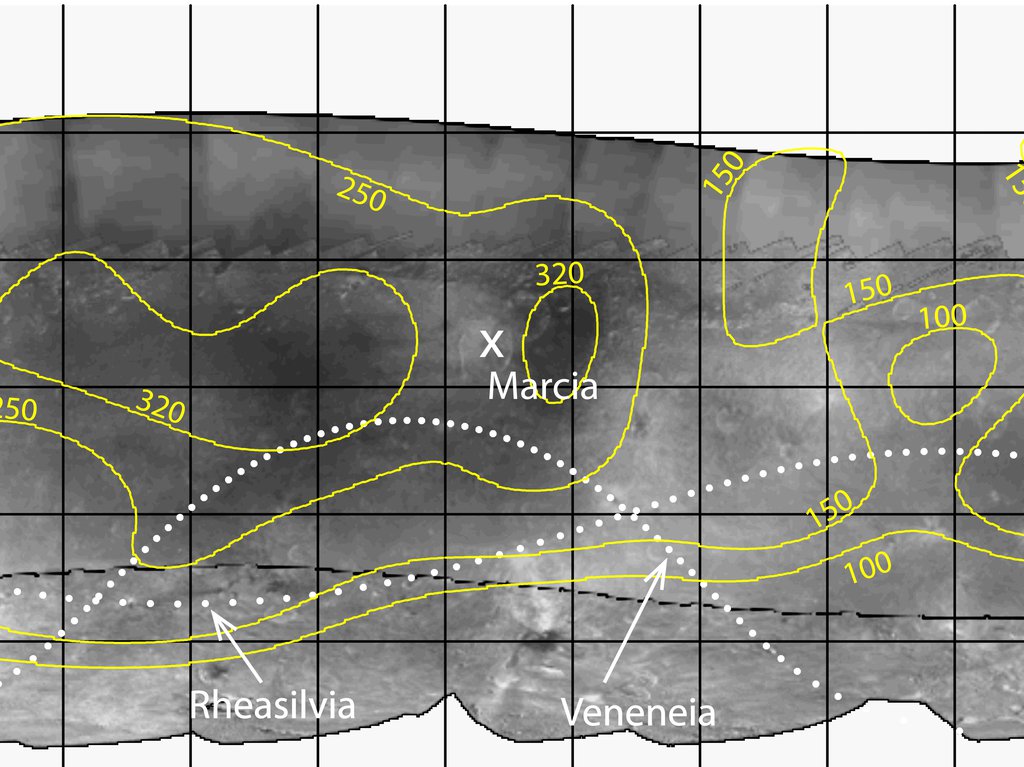 Hydrogen is most abundant in areas with low reflectivity, or albedo, on the giant asteroid Vesta, as shown in this contour map from NASA's Dawn mission.› Larger image
Credit: NASA/JPL-Caltech/UCLA/PSI/MPS/DLR/IDA 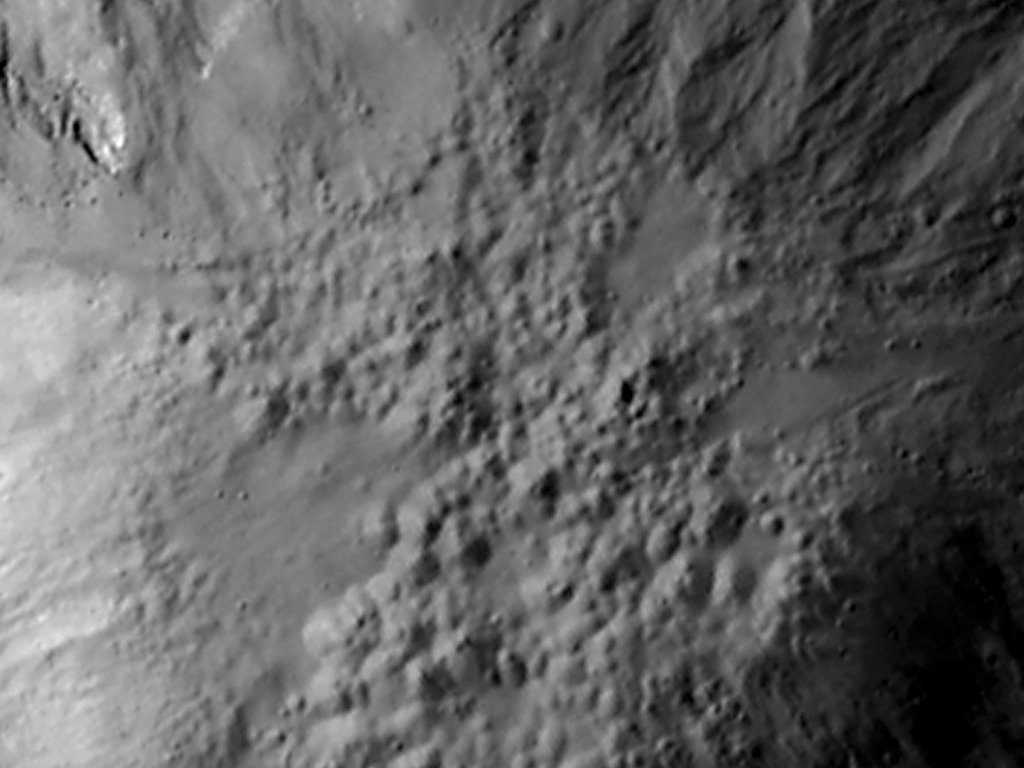 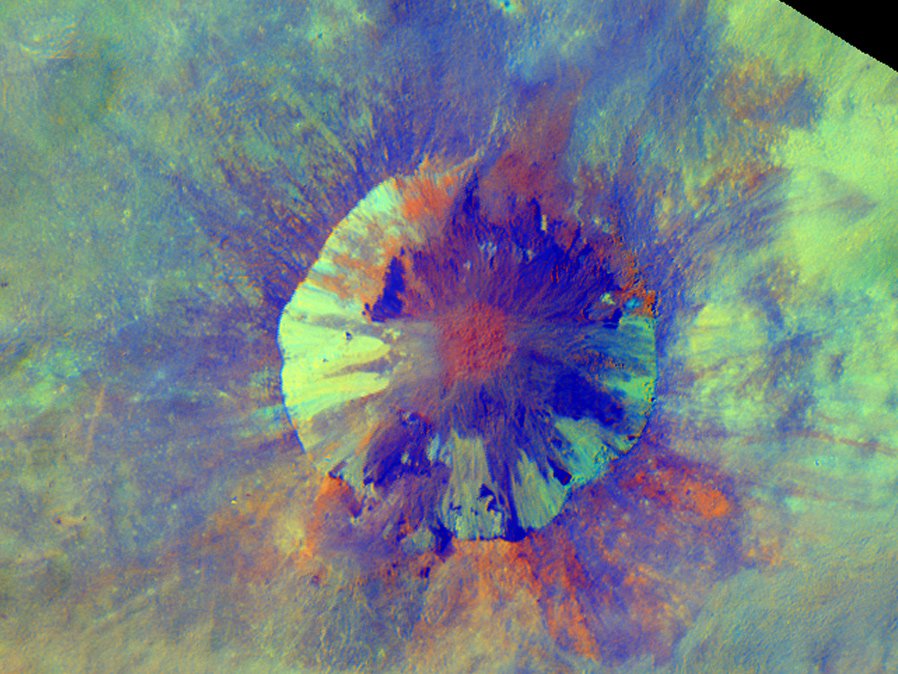 These enhanced-color views from NASA's Dawn mission show an unusual "pitted terrain" on the floors of the craters named Marcia (left) and Cornelia (right) on the giant asteroid Vesta.› Larger image
Credit: NASA/JPL-Caltech/UCLA/MPS/DLR/IDA/JHUAPL 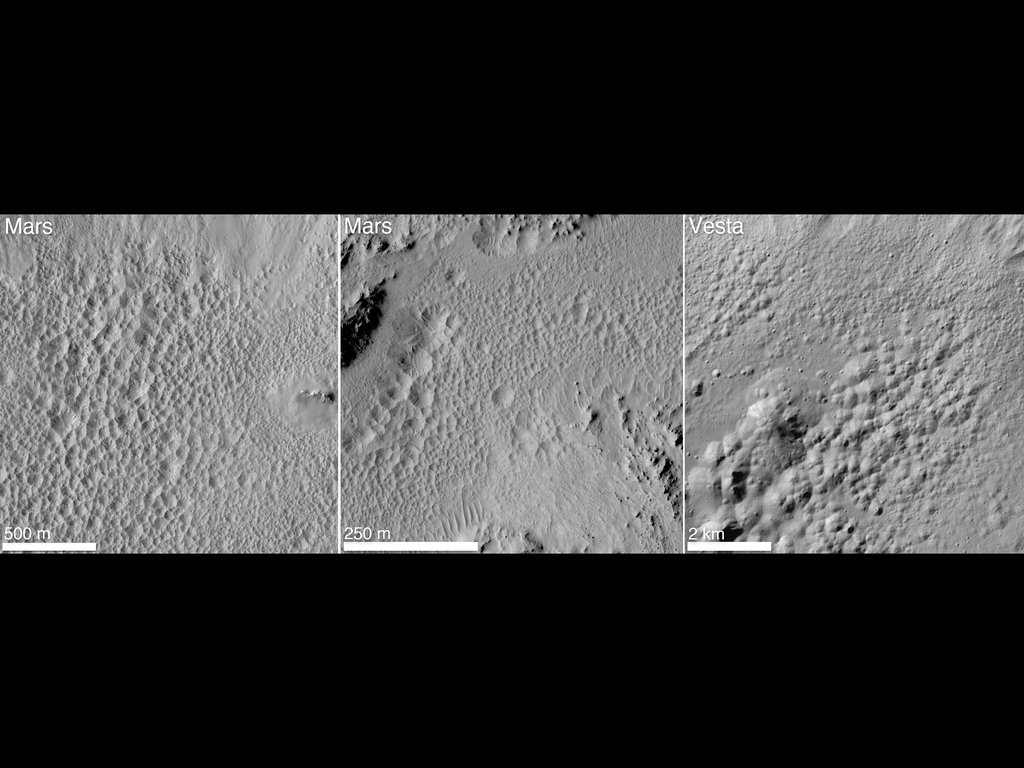 A distinctive "pitted terrain" observed by NASA's Dawn mission on Vesta has also been seen on Mars.› Full image and caption
Credit: NASA/JPL-Caltech/University of Arizona/MPS/DLR/IDA/JHUAPL

NASA's Dawn spacecraft has revealed that the giant asteroid Vesta has its own version of ring around the collar.

PASADENA, Calif. - NASA's Dawn spacecraft has revealed that the giant asteroid Vesta has its own version of ring around the collar. Two new papers based on observations from the low-altitude mapping orbit of the Dawn mission show that volatile, or easily evaporated materials, have colored Vesta's surface in a broad swath around its equator.

Pothole-like features mark some of the asteroid's surface where the volatiles, likely water, released from hydrated minerals boiled off. While Dawn did not find actual water ice at Vesta, there are signs of hydrated minerals delivered by meteorites and dust evident in the giant asteroid's chemistry and geology. The findings appear today in the journal Science.

One paper, led by Thomas Prettyman, the lead scientist for Dawn's gamma ray and neutron detector (GRaND) at the Planetary Science Institute in Tucson, Ariz., describes how the instrument found signatures of hydrogen, likely in the form of hydroxyl or water bound to minerals in Vesta's surface.

"The source of the hydrogen within Vesta's surface appears to be hydrated minerals delivered by carbon-rich space rocks that collided with Vesta at speeds slow enough to preserve their volatile content," said Prettyman.

A complementary paper, led by Brett Denevi, a Dawn participating scientist based at the Johns Hopkins University Applied Physics Laboratory in Laurel, Md., describes the presence of pitted terrain created by the release of the volatiles.

Vesta is the second most massive member of the main asteroid belt. The orbit at which these data were obtained averaged about 130 miles (210 kilometers) above the surface. Dawn left Vesta earlier this month, on Sept. 4 PDT (Sept. 5 EDT), and is now on its way to its second target, the dwarf planet Ceres.

Scientists thought it might be possible for water ice to survive near the surface around the giant asteroid's poles. Unlike Earth's moon, however, Vesta has no permanently shadowed polar regions where ice might survive. The strongest signature for hydrogen in the latest data came from regions near the equator, where water ice is not stable.

In some cases, other space rocks crashed into these deposits later at high speed. The heat from the collisions converted the hydrogen bound to the minerals into water, which evaporated. The holes that were left as the water escaped stretch as much as 0.6 miles (1 kilometer) across and go down as deep as 700 feet (200 meters). Seen in images from Dawn's framing camera, this pitted terrain is best preserved in sections of Marcia crater.

"The pits look just like features seen on Mars, but while water was common on Mars, it was totally unexpected on Vesta in these high abundances," said Denevi. "These results provide evidence that not only were hydrated materials present, but they played an important role in shaping the asteroid's geology and the surface we see today."

GRaND's data are the first direct measurements describing the elemental composition of Vesta's surface. Dawn's elemental investigation by the instrument determined the ratios of iron to oxygen and iron to silicon in the surface materials. The new findings solidly confirm the connection between Vesta and a class of meteorites found on Earth called the Howardite, Eucrite and Diogenite meteorites, which have the same ratios for these elements.  In addition, more volatile-rich fragments of other objects have been identified in these meteorites, which supports the idea that the volatile-rich material was deposited on Vesta.

The Dawn mission is managed by the Jet Propulsion Laboratory for NASA's Science Mission Directorate, Washington. It is a project of the Discovery Program managed by NASA's Marshall Space Flight Center, Huntsville, Ala. UCLA is responsible for overall mission science. Orbital Sciences Corporation of Dulles, Va., designed and built the Dawn spacecraft.

The framing cameras were developed and built under the leadership of the Max Planck Institute for Solar System Research, Katlenburg-Lindau, Germany, with contributions by the German Aerospace Center (DLR) Institute of Planetary Research, Berlin, and in coordination with the Institute of Computer and Communication Network Engineering, Braunschweig. The framing camera project is funded by the Max Planck Society, DLR and NASA. The gamma ray and neutron detector instrument was built by Los Alamos National Laboratory, N.M., and is operated by the Planetary Science Institute, Tucson, Ariz.

To view new images and for more information about Dawn, visit: http://www.nasa.gov/dawn and http://dawn.jpl.nasa.gov .