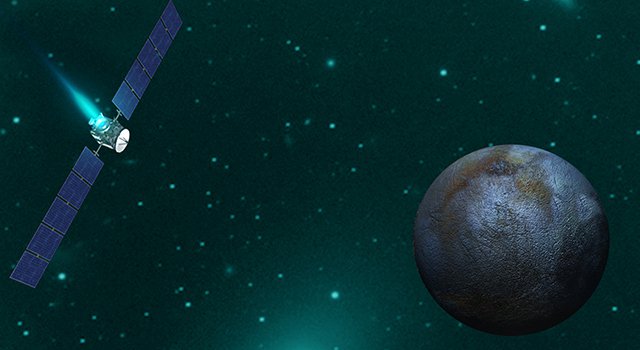 The Dawn spacecraft has resumed normal ion thrusting after the thrusting unexpectedly stopped and the spacecraft entered safe mode on September 11.

The Dawn spacecraft has resumed normal ion thrusting after the thrusting unexpectedly stopped and the spacecraft entered safe mode on September 11. That anomaly occurred shortly before a planned communication with NASA's Deep Space Network that morning. The spacecraft was not performing any special activities at the time.

Engineers immediately began working to restore the spacecraft to its normal operational state. The team determined the source of the problems, corrected them, and then resumed normal ion thrusting on Monday night, Sept. 15.

After investigating what caused the spacecraft to enter safe mode, the Dawn team determined that it was likely triggered by the same phenomenon that affected Dawn three years ago on approach to the protoplanet Vesta: An electrical component in the ion propulsion system was disabled by a high-energy particle of radiation.

"We followed the same strategy that we implemented three years ago to recover from a similar radiation strike -- to swap to one of the other ion engines and a different electronic controller so we could resume thrusting quickly," said Dawn Mission Director and Chief Engineer Marc Rayman of JPL. "We have a plan in place to revive this disabled component later this year."

Complicating the issue, the team discovered that the spacecraft had experienced not just one anomaly, but also a second one that affected the ability to point the main antenna at Earth to communicate. Because the spacecraft could not communicate using its main antenna, the team had to utilize the weaker signals of another antenna, slowing their progress. In addition, Dawn is so far from Earth that radio signals take 53 minutes to make the round trip. Although they have not yet specifically pinpointed the cause of this issue, it could also be explained by a high-energy particle corrupting the software running in the main computer. Ultimately the team reset the computer, which restored the pointing performance to normal.

As a result of the change in the thrust plan, Dawn will enter into orbit around dwarf planet Ceres in April 2015, about a month later than previously planned. The plans for exploring Ceres once the spacecraft is in orbit, however, are not affected.

Dawn orbited Vesta, the second most massive object in the main asteroid belt, from July 2011 until September 2012. The spacecraft's ion propulsion system enabled it to spiral away from Vesta and head toward Ceres, the most massive object in that region. Thanks to the power of ion propulsion, Dawn is the only mission ever targeted to orbit two deep-space destinations.