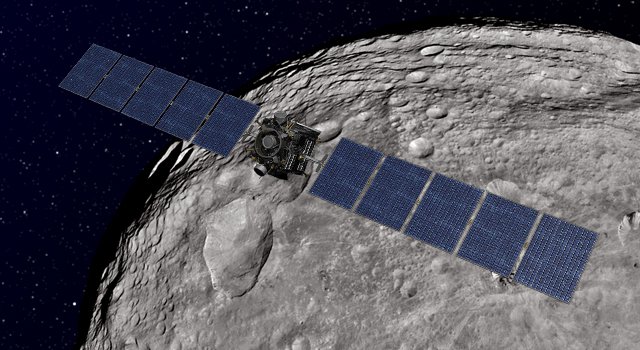 NASA's Dawn mission has received official confirmation that 40 extra days have been added to its exploration of the giant asteroid Vesta.

PASADENA, Calif. - NASA's Dawn mission has received official confirmation that 40 extra days have been added to its exploration of the giant asteroid Vesta, the second most massive object in the main asteroid belt. The mission extension allows Dawn to continue its scientific observations at Vesta until Aug. 26, while still arriving at the dwarf planet Ceres at the same originally scheduled target date in February 2015.

"We are leveraging our smooth and successful operations at Vesta to provide for even more scientific discoveries for NASA and the world." said Robert Mase, Dawn project manager based at NASA's Jet Propulsion Laboratory, Pasadena, Calif. "This extra time will allow us to extend our scientific investigation and learn more about this mysterious world."

The extension will not require any new funding, and will draw on financial reserves that have been carefully managed by the Dawn project. The flexibility provided by the spacecraft's use of efficient ion propulsion system allows it to maintain its originally planned Ceres arrival.

The extension allows for extra observations at Dawn's current low-altitude mapping orbit (average altitude 130 miles or 210 kilometers), which will now last until May 1. The additional time enables the gamma ray and neutron detector to build the best possible maps of the elemental composition of Vesta's surface and improve data for the gravity experiment, the two primary scientific investigations at the low-altitude orbit. The spacecraft's camera and spectrometer are also obtaining additional high-resolution images.

Additional time will also be spent in the planned second high-altitude mapping orbit later this summer. When Dawn arrived at Vesta in July 2011, much of the northern hemisphere was in shadow. But with the passage of time, more of that area will bask in sunshine.

"Dawn has beamed back to us such dazzling Vestan vistas that we are happy to stay a little longer and learn more about this special world," said Christopher Russell, Dawn's principal investigator at UCLA. "While we have this one-of-a-kind opportunity to orbit Vesta, we want to make the best and most complete datasets that we can."

Dawn's mission to Vesta and Ceres is managed by NASA's Jet Propulsion Laboratory, Pasadena, Calif., for NASA's Science Mission Directorate in Washington. JPL is a division of the California Institute of Technology in Pasadena. Dawn is a project of the directorate's Discovery Program, managed by NASA's Marshall Space Flight Center in Huntsville, Ala. UCLA is responsible for overall Dawn mission science. Orbital Sciences Corp. in Dulles, Va., designed and built the spacecraft. The German Aerospace Center, the Max Planck Institute for Solar System Research, the Italian Space Agency and the Italian National Astrophysical Institute are international partners on the mission team.

For more information about the Dawn mission, visit: http://www.nasa.gov/dawn and http://dawn.jpl.nasa.gov .