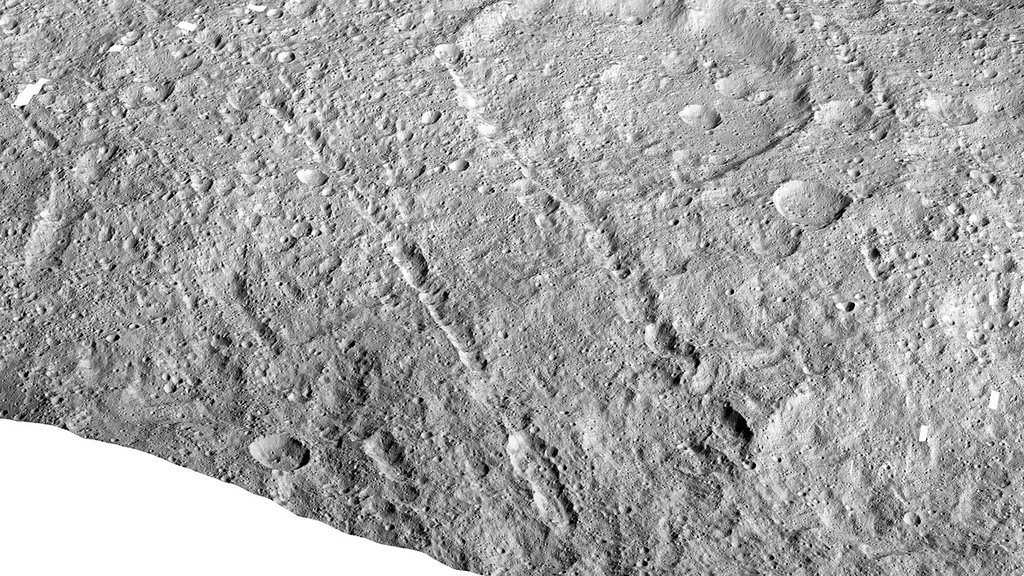 Surface features on Ceres and its interior evolution have a closer relationship than one might think.

Surface features on Ceres -- the largest world between Mars and Jupiter -- and its interior evolution have a closer relationship than one might think.

The findings align with the idea that, hundreds of millions (up to a billion) years ago, materials beneath Ceres' surface pushed upward toward the exterior, creating fractures in the crust.

The indication of upwelling material under Ceres' surface allows for another perspective in establishing how the dwarf planet may have evolved.

Searching for a Needle in a Haystack

Dawn scientists generated a map of over 2,000 linear features on Ceres greater than 0.6 mile (one kilometer) in length that are located outside of impact craters. The scientists interpreted Dawn's observations of two kinds of linear features to further understand their connection to the upwelling material. Secondary crater chains, the most common of the linear features, are long strings of circular depressions created by fragments thrown out of large impact craters as they formed on Ceres. Pit chains, on the other hand, are surface expressions of subsurface fractures.

Among the two features, only pit chains provide insight into Ceres' interior evolution. Scully said the study's greatest challenge was differentiating between secondary crater chains and pit chains. Although the features are strikingly similar, researchers were able to distinguish between them based on their detailed shapes. For example, secondary craters are comparatively rounder than pit chains, which are more irregular. In addition, pit chains lack raised rims, whereas there is usually a rim around secondary craters.

How the Features Formed

While it is possible that the freezing of a global subsurface ocean formed the fractures, this scenario is unlikely, as the locations of pit chains are not evenly dispersed across Ceres' surface. It is also unlikely that the fractures formed by stresses from a large impact because there is no evidence on Ceres of impacts substantial enough to generate fractures of that scale. The most probable explanation, according to the Dawn scientists, is that a region of upwelling material formed the pit chains. The material may have flowed upward from Ceres' interior because it is less dense than surrounding materials.

Dawn scientists look forward to seeing how these characteristics will help other researchers model Ceres' interior evolution, which can test whether upwelling may have occurred near the fractures.

The Dawn mission is managed by JPL for NASA's Science Mission Directorate in Washington. Dawn is a project of the directorate's Discovery Program, managed by NASA's Marshall Space Flight Center in Huntsville, Alabama. UCLA is responsible for overall Dawn mission science. Orbital ATK Inc., in Dulles, Virginia, designed and built the spacecraft. The German Aerospace Center, Max Planck Institute for Solar System Research, Italian Space Agency and Italian National Astrophysical Institute are international partners on the mission team. A complete list of mission participants is at: