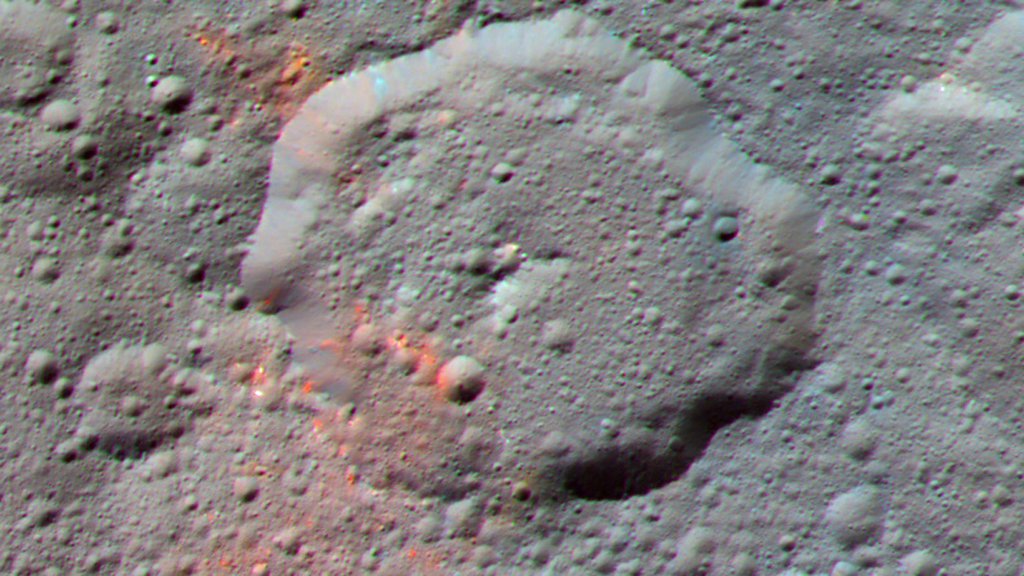 This enhanced color composite image, made with data from the framing camera aboard NASA's Dawn spacecraft, shows the area around Ernutet Crater. The bright red portions appear redder with respect to the rest of Ceres.› Full image and caption
Credit: NASA/JPL-Caltech/UCLA/MPS/DLR/IDA 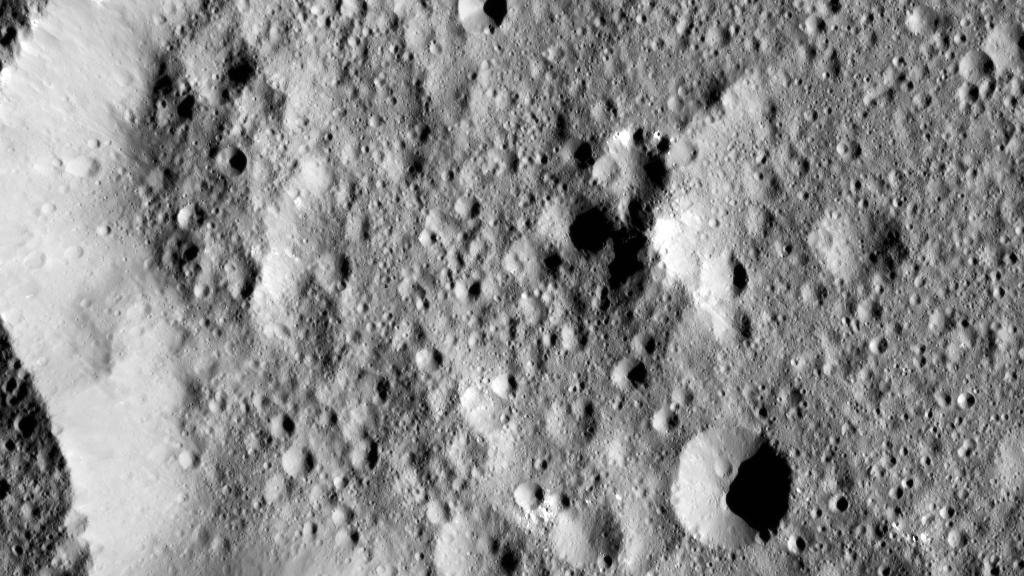 Ernutet Crater measures about 32 miles (52 kilometers) in diameter and is located in the northern hemisphere of Ceres.› Full image and caption
Credit: NASA/JPL-Caltech/UCLA/MPS/DLR/IDA 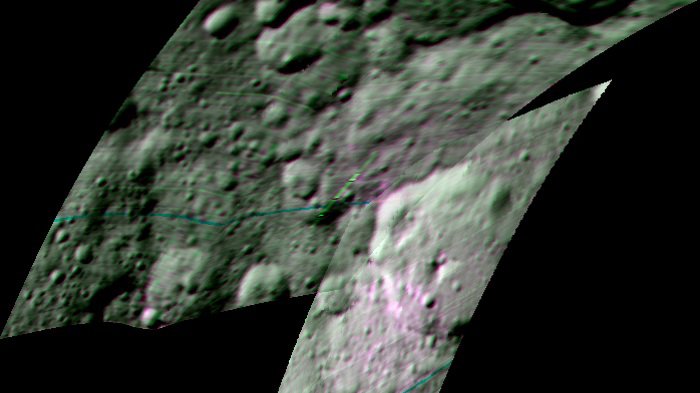 NASA's Dawn mission has found evidence for organic material on Ceres, a dwarf planet and the largest body in the main asteroid belt between Mars and Jupiter.

NASA's Dawn mission has found evidence for organic material on Ceres, a dwarf planet and the largest body in the main asteroid belt between Mars and Jupiter. Scientists using the spacecraft's visible and infrared mapping spectrometer (VIR) detected the material in and around a northern-hemisphere crater called Ernutet. Organic molecules are interesting to scientists because they are necessary, though not sufficient, components of life on Earth.

The discovery adds to the growing list of bodies in the solar system where organics have been found. Organic compounds have been found in certain meteorites as well as inferred from telescopic observations of several asteroids. Ceres shares many commonalities with meteorites rich in water and organics -- in particular, a meteorite group called carbonaceous chondrites. This discovery further strengthens the connection between Ceres, these meteorites and their parent bodies.

"This is the first clear detection of organic molecules from orbit on a main belt body," said Maria Cristina De Sanctis, lead author of the study, based at the National Institute of Astrophysics, Rome. The discovery is reported in the journal Science.

Data presented in the Science paper support the idea that the organic materials are native to Ceres. The carbonates and clays previously identified on Ceres provide evidence for chemical activity in the presence of water and heat. This raises the possibility that the organics were similarly processed in a warm water-rich environment.

The organics discovery adds to Ceres' attributes associated with ingredients and conditions for life in the distant past. Previous studies have found hydrated minerals, carbonates, water ice, and ammoniated clays that must have been altered by water. Salts and sodium carbonate, such as those found in the bright areas of Occator Crater, are also thought to have been carried to the surface by liquid.

"This discovery adds to our understanding of the possible origins of water and organics on Earth," said Julie Castillo-Rogez, Dawn project scientist based at NASA's Jet Propulsion Laboratory in Pasadena, California.

Where are the organics?

The VIR instrument was able to detect and map the locations of this material because of its special signature in near-infrared light.

The organic materials on Ceres are mainly located in an area covering approximately 400 square miles (about 1,000 square kilometers). The signature of organics is very clear on the floor of Ernutet Crater, on its southern rim and in an area just outside the crater to the southwest. Another large area with well-defined signatures is found across the northwest part of the crater rim and ejecta. There are other smaller organic-rich areas several miles (kilometers) west and east of the crater. Organics also were found in a very small area in Inamahari Crater, about 250 miles (400 kilometers) away from Ernutet.

In enhanced visible color images from Dawn's framing camera, the organic material is associated with areas that appear redder with respect to the rest of Ceres. The distinct nature of these regions stands out even in low-resolution image data from the visible and infrared mapping spectrometer.

Next steps for Dawn

Having completed nearly two years of observations in orbit at Ceres, Dawn is now in a highly elliptical orbit at Ceres, going from an altitude of 4,670 miles (7,520 kilometers) up to almost 5,810 miles (9,350 kilometers). On Feb. 23, it will make its way to a new altitude of around 12,400 miles (20,000 kilometers), about the height of GPS satellites above Earth, and to a different orbital plane. This will put Dawn in a position to study Ceres in a new geometry. In late spring, Dawn will view Ceres with the sun directly behind the spacecraft, such that Ceres will appear brighter than before, and perhaps reveal more clues about its nature.