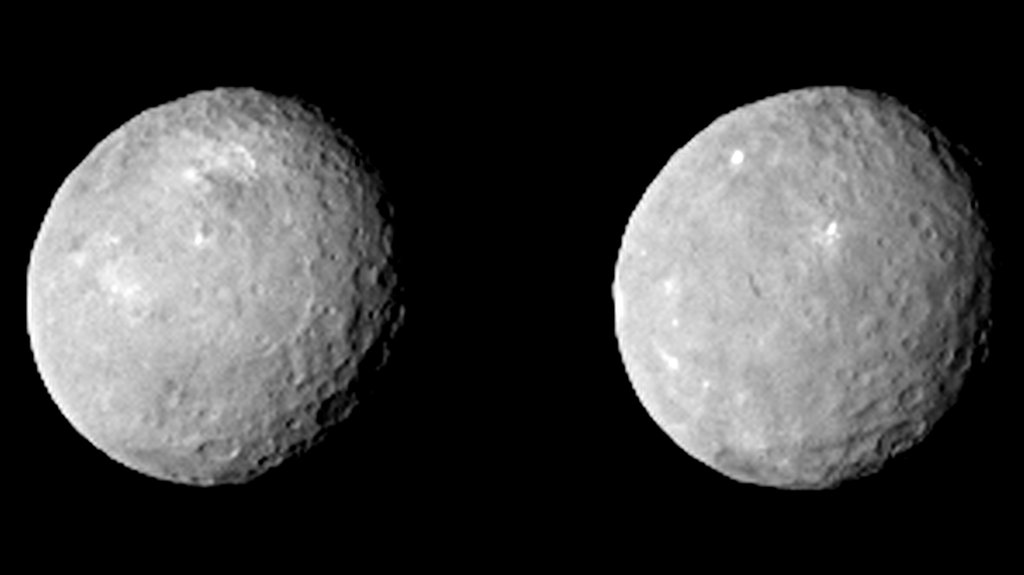 These two views of Ceres were acquired by NASA's Dawn spacecraft on Feb. 12, 2015, from a distance of about 52,000 miles (83,000 kilometers) as the dwarf planet rotated. The images have been magnified from their original size.› Full image and caption
Credit: NASA/JPL-Caltech/UCLA/MPS/DLR/IDA

Craters and mysterious bright spots are beginning to pop out in the latest images of Ceres from NASA's Dawn spacecraft.

Craters and mysterious bright spots are beginning to pop out in the latest images of Ceres from NASA's Dawn spacecraft. These images, taken Feb. 12 at a distance of 52,000 miles (83,000 kilometers) from the dwarf planet, pose intriguing questions for the science team to explore as the spacecraft nears its destination.

"As we slowly approach the stage, our eyes transfixed on Ceres and her planetary dance, we find she has beguiled us but left us none the wiser," said Chris Russell, principal investigator of the Dawn mission, based at UCLA. "We expected to be surprised; we did not expect to be this puzzled."

Dawn will be gently captured into orbit around Ceres on March 6. As the spacecraft delivers better images and other data, the science team will be investigating the nature and composition of the dwarf planet, including the nature of the craters and bright spots that are coming into focus. The latest images, which have a resolution of 4.9 miles (7.8 kilometers) per pixel, represent the sharpest views of Ceres to date.

The spacecraft explored the giant asteroid Vesta for 14 months during 2011 and 2012. Scientists gained numerous insights about the geological history of this body and saw its cratered surface in fine detail. By comparing Vesta and Ceres, they will develop a better understanding of the formation of the solar system.

Dawn's mission to Vesta and Ceres is managed by the Jet Propulsion Laboratory for NASA's Science Mission Directorate in Washington. Dawn is a project of the directorate's Discovery Program, managed by NASA's Marshall Space Flight Center in Huntsville, Alabama. UCLA is responsible for overall Dawn mission science. Orbital ATK, Inc., of Dulles, Virginia, designed and built the spacecraft. JPL is managed for NASA by the California Institute of Technology in Pasadena. The framing cameras were provided by the Max Planck Institute for Solar System Research, Gottingen, Germany, with significant contributions by the German Aerospace Center (DLR) Institute of Planetary Research, Berlin, and in coordination with the Institute of Computer and Communication Network Engineering, Braunschweig. The visible and infrared mapping spectrometer was provided by the Italian Space Agency and the Italian National Institute for Astrophysics, built by Selex ES, and is managed and operated by the Italian Institute for Space Astrophysics and Planetology, Rome. The gamma ray and neutron detector was built by Los Alamos National Laboratory, New Mexico, and is operated by the Planetary Science Institute, Tucson, Arizona.