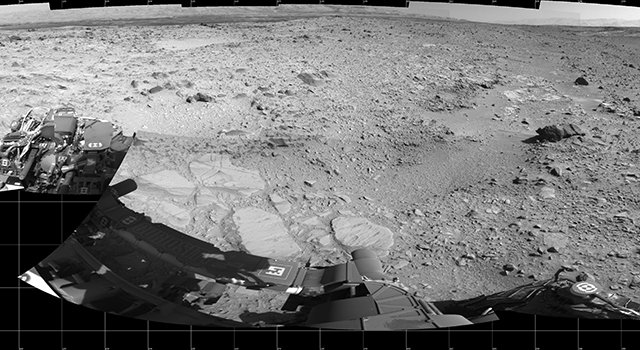 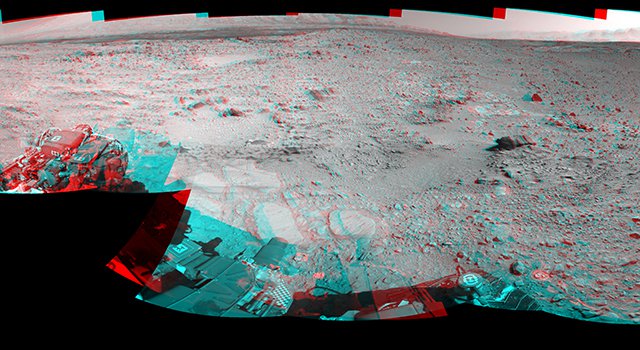 NASA's Mars rover Curiosity captured this stereo view using its Navigation Camera (Navcam) after a 17-foot (5.3 meter) drive on 477th Martian day, or sol, of the rover's work on Mars (Dec. 8, 2013). The scene appears three dimensional when viewed through red-blue glasses with the red lens on the left. It spans 360 degrees, with south at the center and north at both ends.› Full image and caption
Credit: NASA/JPL-Caltech 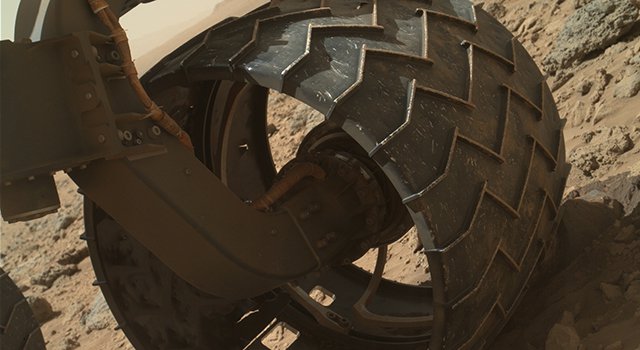 The left-front wheel of NASA's Curiosity Mars rover shows dents and holes in this image taken during the 469th Martian day, or sol, of the rover's work on Mars (Nov. 30, 2013).› Full image and caption
Credit: NASA/JPL-Caltech

The team operating NASA's Mars Exploration Rover Curiosity has completed a software upgrade on the vehicle and is next planning a check of wear and tear on the rover's wheels.

The team operating NASA's Mars rover Curiosity has completed a software upgrade on the vehicle and is next planning a check of wear and tear on the rover's wheels.

This is the third upgrade version since Curiosity's landing on Mars16 months ago. Completing the switch from version 10 took about a week. An earlier switch to version 11 prompted an unintended reboot on Nov. 7 and a return to version 10, but the latest transition went smoothly.

These upgrades allow continued advances in the rover's capabilities. For example, version 11 brings expanded capability for using the Curiosity's robotic arm while the vehicle is on slopes. It also improves flexibility for storing information overnight to use in resuming autonomous driving on a second day.

An upcoming activity will be driving to a relatively smooth patch of ground to take a set of images of Curiosity's aluminum wheels, using the Mars Hand Lens Imager (MAHLI) camera at the end of the rover's arm.

"We want to take a full inventory of the condition of the wheels," Erickson said. "Dents and holes were anticipated, but the amount of wear appears to have accelerated in the past month or so. It appears to be correlated with driving over rougher terrain. The wheels can sustain significant damage without impairing the rover's ability to drive. However, we would like to understand the impact that this terrain type has on the wheels, to help with planning future drives."

Curiosity's recent driving has crossed an area that has numerous sharp rocks embedded in the ground. Routes to future destinations for the mission may be charted to lessen the amount of travel over such rough terrain, compared to smoother ground nearby.