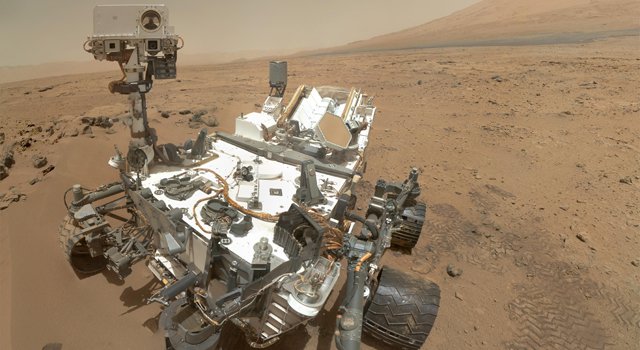 A Martian day, called a sol, is about 40 minutes longer than an Earth day, so the team's start time for daily planning has been moving a few hours later each week. This often resulted in the team working overnight hours, Pacific Time.

Starting this week, most of the team's work will stay within bounds of 8 a.m. to 8 p.m., PST. Compressing the daily planning process for rover activities makes the switch possible.

"People are glad to be going off Mars time," said Richard Cook of NASA's Jet Propulsion Laboratory, Pasadena, Calif., project manager for NASA's Mars Science Laboratory Project, which operates Curiosity. "The team has been successful in getting the duration of the daily planning process from more than 16 hours, during the initial weeks after landing, down to 12 hours. We've been getting better at operations."

A simultaneous change this week begins more dispersed operations for the scientists on the rover team. The team includes about 200 JPL engineers and about 400 scientists, mostly from other institutions. More than 200 non-JPL scientists who have spent some time working at JPL since Curiosity's landing on Aug. 5, 2012 (Pacific Time; Aug. 6, Eastern Time and Universal Time) will continue participating regularly from their home institutions throughout North America and Europe. The team has been preparing in recent weeks to use dispersed participation teleconferences and Web connections.

"The phase that we're completing, working together at one location, has been incredibly valuable for team-building and getting to know each other under the pressure of daily timelines," said Mars Science Laboratory Deputy Project Scientist Joy Crisp, of JPL. "We have reached the point where we can continue working together well without needing to have people living away from their homes."

The operational planning this week is focused on getting a first sample of solid Martian material into the rover's Sample Analysis at Mars, or SAM, instrument.

On the mission's Sol 89 (Nov. 5, 2012), the other analytical instrument inside the rover, Chemistry and Mineralogy, or CheMin, dumped out the second soil sample it had finished analyzing. That second sample into CheMin came from the fourth scoop of soil that Curiosity's robotic arm collected at a site called "Rocknest." Also on Sol 89 came confirmation that SAM had completed an overnight analysis run on a blank sample cup in preparation for receiving a soil sample. Plans call for the fifth scoop at Rocknest to provide samples going into both SAM and CheMin in coming days.