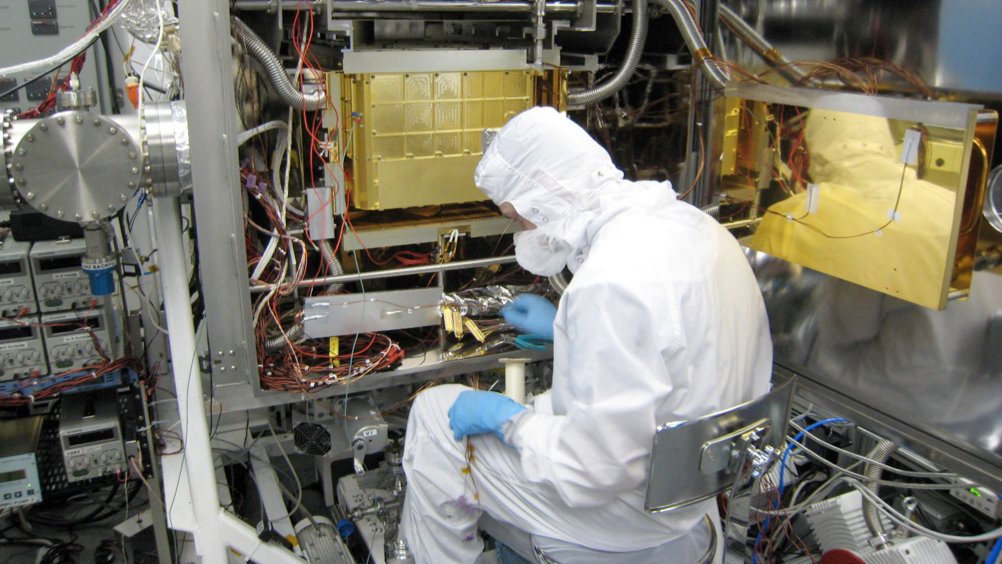 A Sample Analysis at Mars (SAM) team member at NASA's Goddard Space Flight Center in Maryland prepares the SAM testbed for an experiment. This test copy of SAM is inside a chamber that can model the pressure and temperature environment that SAM sees inside NASA's Curiosity rover on Mars. › Full image and caption

While NASA's Curiosity rover concluded its detailed examination of the rock layers of the "Pahrump Hills" in Gale Crater on Mars this winter, some members of the rover team were busy analyzing the Martian atmosphere for xenon, a heavy noble gas.

Curiosity's Sample Analysis at Mars (SAM) experiment analyzed xenon in the planet's atmosphere. Since noble gases are chemically inert and do not react with other substances in the air or on the ground, they are excellent tracers of the history of the atmosphere. Xenon is present in the Martian atmosphere at a challengingly low quantity and can be directly measured only with on-site experiments such as SAM.

"Xenon is a fundamental measurement to make on a planet such as Mars or Venus, since it provides essential information to understand the early history of these planets and why they turned out so differently from Earth," said Melissa Trainer, one of the scientists analyzing the SAM data.

A planetary atmosphere is made up of different gases, which are in turn made up of variants of the same chemical element called isotopes. When a planet loses its atmosphere, that process can affect the ratios of remaining isotopes.

Measuring xenon tells us more about the history of the loss of the Martian atmosphere. The special characteristics of xenon - it exists naturally in nine different isotopes, ranging in atomic mass from 124 (with 70 neutrons per atom) to 136 (with 82 neutrons per atom) - allows us to learn more about the process by which the layers of atmosphere were stripped off Mars than using measurements of other gases.

A process removing gas from the top of the atmosphere removes lighter isotopes more readily than heavier ones, leaving a ratio higher in heavier isotopes than it was originally.

The SAM measurement of the ratios of the nine xenon isotopes traces a very early period in the history of Mars when a vigorous atmospheric escape process was pulling away even the heavy xenon gas. The lighter isotopes were escaping just a bit faster than the heavy isotopes.

Those escapes affected the ratio of isotopes in the atmosphere left behind, and the ratios today are a signature retained in the atmosphere for billions of years. This signature was first inferred several decades ago from isotope measurements on small amounts of Martian atmospheric gas trapped in rocks from Mars that made their way to Earth as meteorites.

"We are seeing a remarkably close match of the in-situ data to that from bits of atmosphere captured in some of the Martian meteorites," said SAM Deputy Principal Investigator Pan Conrad.

SAM previously measured the ratio of two isotopes of a different noble gas, argon. The results pointed to continuous loss over time of much of the original atmosphere of Mars.

The xenon experiment required months of careful testing at NASA's Goddard Space Flight Center in Greenbelt, Maryland, using a close copy of the SAM instrument enclosed in a chamber that simulates the Mars environment. This testing was led by Goddard's Charles Malespin, who developed and optimized the sequence of instructions for SAM to carry out on Mars.

"I'm gratified that we were able to successfully execute this run on Mars and demonstrate this new capability for Curiosity," said Malespin.