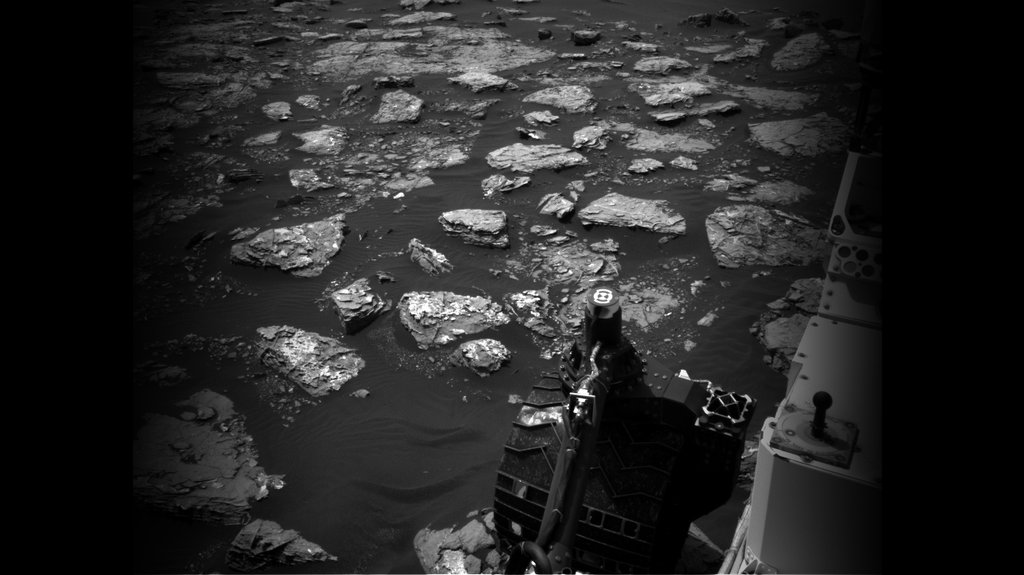 This Dec. 2, 2016, view from the Navigation Camera (Navcam) on the mast of NASA's Curiosity Mars Rover shows rocky ground within view while the rover was working at an intended drilling site called "Precipice" on lower Mount Sharp.› Full image and caption
Credit: NASA/JPL-Caltech

Mars Curiosity is studying its surroundings and monitoring, not driving or using its arm for science, while the team diagnoses an issue with a motor that moves the drill.

NASA's Curiosity Mars rover is studying its surroundings and monitoring the environment, rather than driving or using its arm for science, while the rover team diagnoses an issue with a motor that moves the rover's drill.

Curiosity is at a site on lower Mount Sharp selected for what would be the mission's seventh sample-collection drilling of 2016. The rover team learned Dec. 1 that Curiosity did not complete the commands for drilling. The rover detected a fault in an early step in which the "drill feed" mechanism did not extend the drill to touch the rock target with the bit.

"We are in the process of defining a set of diagnostic tests to carefully assess the drill feed mechanism. We are using our test rover here on Earth to try out these tests before we run them on Mars," Curiosity Deputy Project Manager Steven Lee, at NASA's Jet Propulsion Laboratory in Pasadena, California, said Monday. "To be cautious, until we run the tests on Curiosity, we want to restrict any dynamic changes that could affect the diagnosis. That means not moving the arm and not driving, which could shake it."

Two among the set of possible causes being assessed are that a brake on the drill feed mechanism did not disengage fully or that an electronic encoder for the mechanism's motor did not function as expected. Lee said that workarounds may exist for both of those scenarios, but the first step is to identify why the motor did not operate properly last week.

The drill feed mechanism pushes the front of the drill outward from the turret of tools at the end of Curiosity's robotic arm. The drill collects powdered rock that is analyzed by laboratory instruments inside the rover. While arm movements and driving are on hold, the rover is using cameras and a spectrometer on its mast, and a suite of environmental monitoring capabilities.

The rover is climbing to sequentially higher and younger layers of lower Mount Sharp to investigate how the region's ancient climate changed, billions of years ago. Clues about environmental conditions are recorded in the rock layers. During its first year on Mars, the mission succeeded at its main goal by finding that the region once offered environmental conditions favorable for microbial life, if Mars has ever hosted life. The conditions in long-lived ancient freshwater Martian lake environments included all of the key chemical elements needed for life as we know it, plus a chemical source of energy that is used by many microbes on Earth.

Curiosity's drill, as used at all 15 of the rock targets drilled so far, combines hammering action and rotating-bit action to penetrate the targets and collect sample material. The drilling attempt last week was planned as the mission's first using a non-percussion drilling method that relies only on the drill's rotary action. Short-circuiting in the percussion mechanism has occurred intermittently and unpredictably several times since first seen in February 2015.

"We still have percussion available, but we would like to be cautious and use it for targets where we really need it, and otherwise use rotary-only where that can give us a sample," said Curiosity Project Scientist Ashwin Vasavada at JPL.