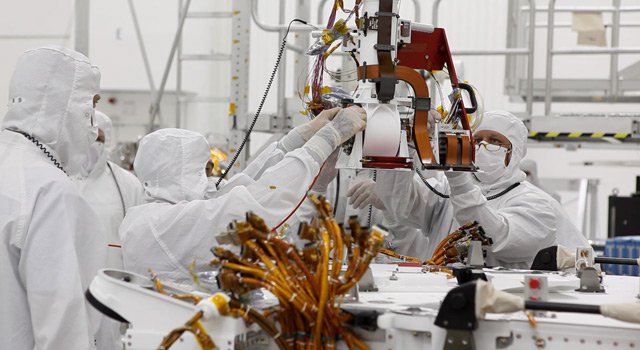 In this image, engineers are dressed head to toe in "bunny suits" (white hoods, lab-style coats and gloves). Only their eyes and foreheads can be seen. They are huddled around the base of the rover's "neck" (its Mast). They watch intently as they carefully lower the Mast to attach it to the rover's flat "back." A cluster of yellow and red wires on the rover's body pokes up in the foreground of the image.› Full image and caption
Credit: NASA/JPL-Caltech 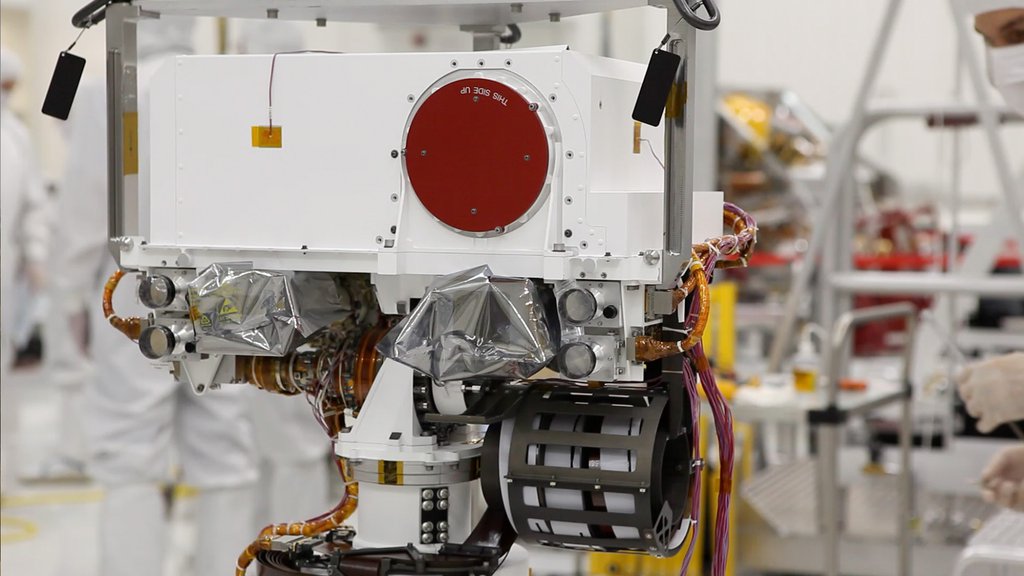 This image shows a close-up of the Curiosity rover's "head." At the top is a white box structure with a large red circle (the rover's laser called ChemCam) to the right. Beneath the box are two cameras, which will provide views of the Martian surface. They are covered with protective silvery material.› Full image and caption
Credit: NASA/JPL-Caltech 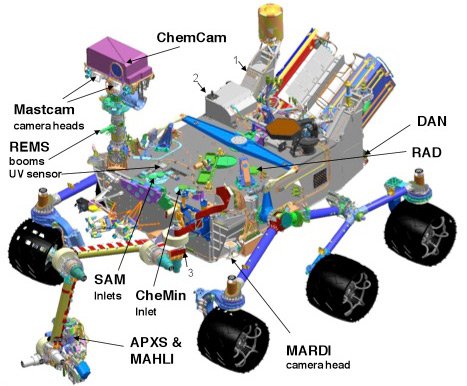 The figure above shows the location of the 10 science instruments on the rover.› Full image and caption
Credit: NASA/JPL-Caltech

In one week, Curiosity grew by approximately 1 meter (3.5 feet) when spacecraft technicians and engineers attached the rover's neck and head (called the Remote Sensing Mast) to its body.

Talk about a growth-spurt. In one week, Curiosity grew by approximately 1 meter (3.5 feet) when spacecraft technicians and engineers attached the rover's neck and head (called the Remote Sensing Mast) to its body. At around 2 meters (about 7 feet) tall, the next rover to Mars now stands head and shoulders above the rest.

While it now has a good head on its shoulders, Curiosity's "eyes" (the Mastcam), have been blindfolded in a protective silvery material. The Mastcam, containing two digital cameras, will soon be unveiled, so engineers can test its picture-taking abilities.

Up next today (July 23), the towering rover will take its first baby steps: a slow roll on the floor of the clean room where it's being built at NASA's Jet Propulsion Laboratory, Pasadena, Calif. Watch Curiosity's progress live from the clean room on Ustream until 3:30 p.m. PDT today: http://www.ustream.tv/nasajpl .

Learn more about Curiosity at: http://mars.jpl.nasa.gov/msl/ .