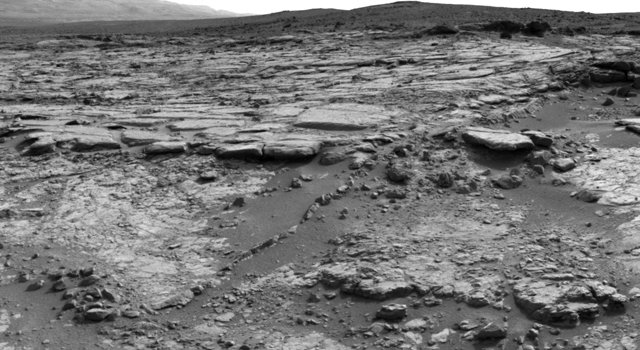 The sinuous rock feature in the lower center of this mosaic of images recorded by the NASA Mars rover Curiosity is called "Snake River." The images in the mosaic were taken by Curiosity's Navigation Camera during the 133rd Martian day, or sol, of the rover's mission on Mars (Dec. 20, 2012).› Full image and caption
Credit: NASA/JPL-Caltech

Snake River is a thin curving line of darker rock cutting through flatter rocks and jutting above sand. Curiosity's science team plans to get a closer look at it before proceeding to other nearby rocks.

"It's one piece of the puzzle," said the mission's project scientist, John Grotzinger of the California Institute of Technology in Pasadena. "It has a crosscutting relationship to the surrounding rock and appears to have formed after the deposition of the layer that it transects."

The drive during the mission's 147th Martian day, or sol, on the Red Planet took Curiosity about 10 feet (3 meters) northwestward and brought the mission's total driving distance to 2,303 feet (702 meters). The rover is within a shallow depression called "Yellowknife Bay," which is a flatter and lighter-toned type of terrain from what the mission crossed during its first four months inside Gale Crater.

During a holiday break for the rover team, Curiosity stayed at a location within Yellowknife Bay from which the rover took images of its surroundings. The team is evaluating possible first targets for use of Curiosity's hammering drill in coming weeks. The drill will collect powdered samples from the interior of rocks for analysis by instruments inside the rover.

"We had no surprises over the holidays," said the mission's project manager, Richard Cook of NASA's Jet Propulsion Laboratory, Pasadena. "Now, Curiosity is back on the move. The area the rover is in looks good for our first drilling target."

NASA's Mars Science Laboratory Project is using Curiosity to assess whether areas inside Gale Crater ever offered a habitable environment for microbes. JPL, a division of Caltech, manages the project for NASA's Science Mission Directorate in Washington.