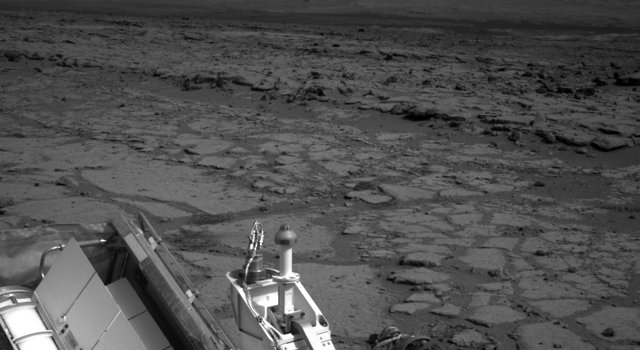 The NASA Mars rover Curiosity used its left Navigation Camera to record this view of the step down into a shallow depression called "Yellowknife Bay."› Full image and caption
Credit: NASA/JPL-Caltech 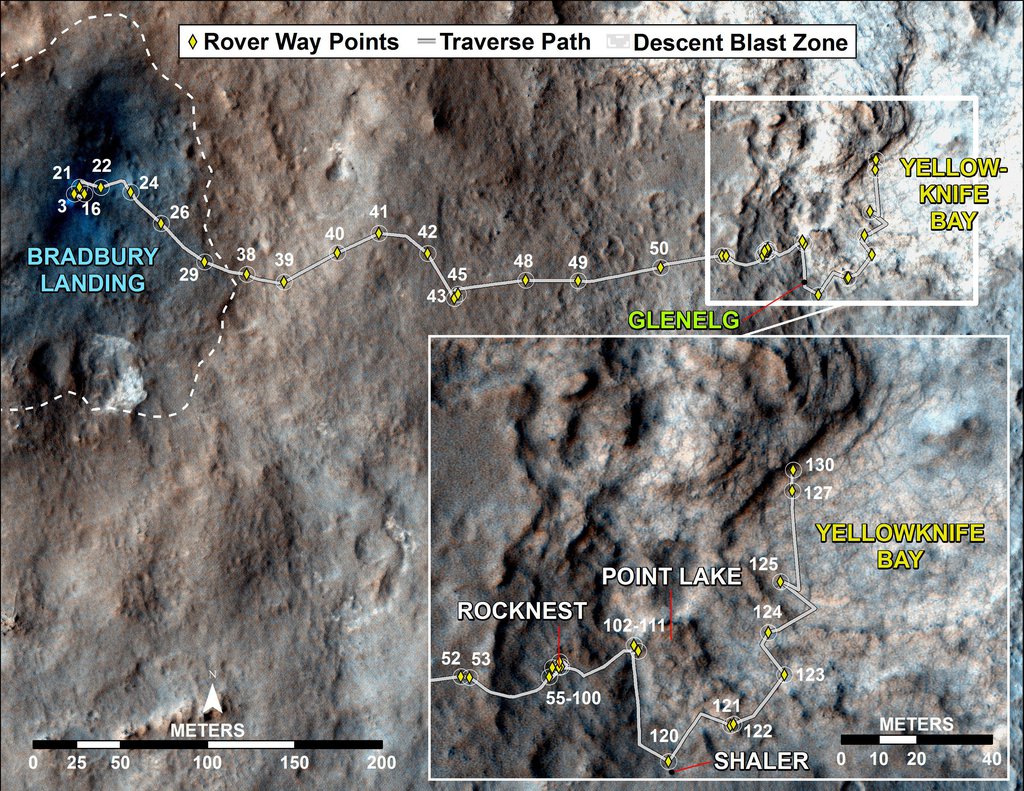 This map traces where NASA's Mars rover Curiosity drove between landing at a site subsequently named "Bradbury Landing," and the position reached during the mission's 130th Martian day, or sol, (Dec. 17, 2012). The inset shows the most recent legs of the traverse in greater detail.› Full image and caption
Credit: NASA/JPL-Caltech/Univ. of Arizona

The NASA Mars rover Curiosity this week is driving within a shallow depression called "Yellowknife Bay," providing information to help researchers choose a rock to drill.

Using Curiosity's percussive drill to collect a sample from the interior of a rock, a feat never before attempted on Mars, is the mission's priority for early 2013. After the powdered-rock sample is sieved and portioned by a sample-processing mechanism on the rover's arm, it will be analyzed by instruments inside Curiosity.

Yellowknife Bay is within a different type of terrain from what the rover has traversed since landing inside Mars' Gale Crater on Aug. 5, PDT (Aug. 6, UTC). The terrain Curiosity has entered is one of three types that intersect at a location dubbed "Glenelg," chosen as an interim destination about two weeks after the landing.

Curiosity reached the lip of a 2-foot (half-meter) descent into Yellowknife Bay with a 46-foot (14-meter) drive on Dec. 11. The next day, a drive of about 86 feet (26.1 meters) brought the rover well inside the basin. The team has been employing the Mast Camera (Mastcam) and the laser-wielding Chemistry and Camera (ChemCam) for remote-sensing studies of rocks along the way.

On Dec. 14, Curiosity drove about 108 feet (32.8 meters) to reach rock targets of interest called "Costello" and "Flaherty." Researchers used the Alpha Particle X-Ray Spectrometer (APXS) and Mars Hand Lens Imager (MAHLI) at the end of the rover's arm to examine the targets. After finishing those studies, the rover drove again on Dec. 17, traveling about 18 feet (5.6 meters) farther into Yellowknife Bay. That brings the mission's total driving distance to 0.42 mile (677 meters) since Curiosity's landing.

One additional drive is planned this week before the rover team gets a holiday break. Curiosity will continue studying the Martian environment from its holiday location at the end point of that drive within Yellowknife Bay. The mission's plans for most of 2013 center on driving toward the primary science destination, a 3-mile-high (5-kilometer) layered mound called Mount Sharp.

NASA's Mars Science Laboratory Project is using Curiosity during a two-year prime mission to assess whether areas inside Gale Crater ever offered a habitable environment for microbes. NASA's Jet Propulsion Laboratory, a division of the California Institute of Technology in Pasadena, manages the project for NASA's Science Mission Directorate in Washington.