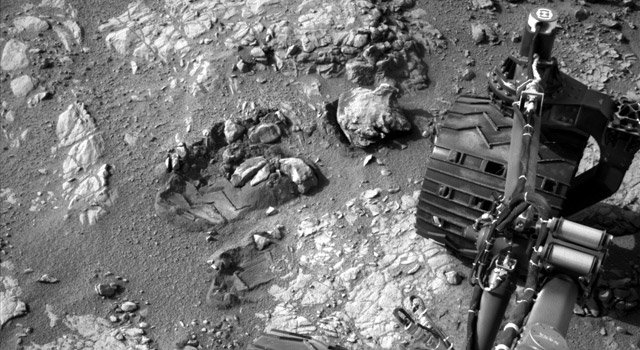 This view of Curiosity's left-front and left-center wheels and of marks made by wheels on the ground in the "Yellowknife Bay" area comes from one of six cameras used on Mars for the first time more than six months after the rover landed. The left Navigation Camera (Navcam) linked to Curiosity's B-side computer took this image during the 223rd Martian day, or sol, of Curiosity's work on Mars (March 22, 2013). The wheels are 20 inches (50 centimeters) in diameter.› Full image and caption
Credit: NASA/JPL-Caltech

NASA's Mars rover Curiosity has resumed science investigations after recovery from a computer glitch that prompted a switch to a redundant main computer on Feb. 28.

PASADENA, Calif. - NASA's Mars rover Curiosity has resumed science investigations after recovery from a computer glitch that prompted the engineers to switch the rover to a redundant main computer on Feb. 28.

The rover has been monitoring the weather since March 21 and delivered a new portion of powdered-rock sample for laboratory analysis on March 23, among other activities.

The powder delivered on Saturday came from the rover's first full drilling into a rock to collect a sample. The new portion went into the Sample Analysis at Mars (SAM) instrument inside the rover, which began analyzing this material and had previously analyzed other portions from the same drilling. SAM can analyze samples in several different ways, so multiple portions from the same drilling are useful.

Like many spacecraft, Curiosity carries a pair of main computers, redundant to each other, to have a backup available if one fails. Each of the computers, A-side and B-side, also has other redundant subsystems linked to just that computer. Curiosity is now operating on its B-side, as it did during part of the flight from Earth to Mars. The A-side was most recently used starting a few weeks before landing and continuing until Feb. 28, when engineers commanded a switch to the B-side in response to a memory glitch on the A-side. The A-side now is available as a backup if needed.

One aspect of ramping-up activities after switching to the B-side computer has been to check the six engineering cameras that are hard-linked to that computer. The rover's science instruments, including five science cameras, can each be operated by either the A-side or B-side computer, whichever is active. However, each of Curiosity's 12 engineering cameras is linked to just one of the computers. The engineering cameras are the Navigation Camera (Navcam), the Front Hazard-Avoidance Camera (Front Hazcam) and Rear Hazard-Avoidance Camera (Rear Hazcam). Each of those three named cameras has four cameras on it: two stereo pairs of cameras, with one pair linked to each computer. Only the pairs linked to the active computer can be used, and the A-side computer was active from before landing, in August, until Feb. 28.

"This was the first use of the B-side engineering cameras since April 2012, on the way to Mars," said JPL's Justin Maki, team lead for these cameras. "Now we've used them on Mars for the first time, and they've all checked out OK."

Engineers quickly diagnosed a software issue that prompted Curiosity to put itself into a precautionary standby "safe mode" on March 16, and they know how to prevent it from happening again. The rover stayed on its B-side while it was in safe mode and subsequently as science activities resumed.

Upcoming activities include preparations for a moratorium on transmitting commands to Curiosity from April 4 to May 1, while Mars will be passing nearly directly behind the sun from Earth's perspective. The moratorium is a precaution against possible interference by the sun corrupting a command sent to the rover.

NASA's Mars Science Laboratory project is using Curiosity and the rover's 10 science instruments to investigate the environmental history within Gale Crater, a location where the project has found that conditions were long ago favorable for microbial life. JPL, a division of the California Institute of Technology in Pasadena, manages the project for NASA's Science Mission Directorate in Washington.