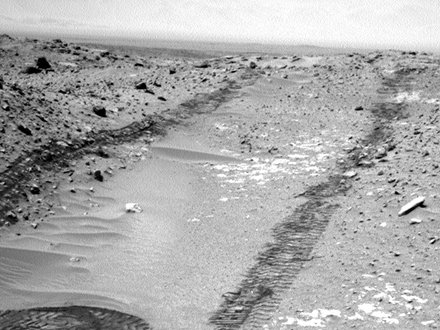 In this image from NASA's Curiosity Mars rover looking up the ramp at the northeastern end of "Hidden Valley," a pale outcrop including drilling target "Bonanza King" is at the center of the scene.› Full image and caption
Credit: NASA/JPL-Caltech 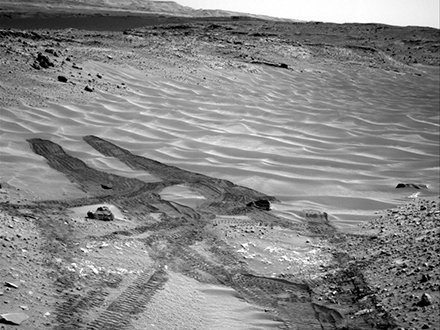 This image from NASA's Curiosity Mars rover looks down the ramp at the northeastern end of "Hidden Valley" and across the sandy-floored valley to lower slopes of Mount Sharp on the horizon.› Full image and caption
Credit: NASA/JPL-Caltech 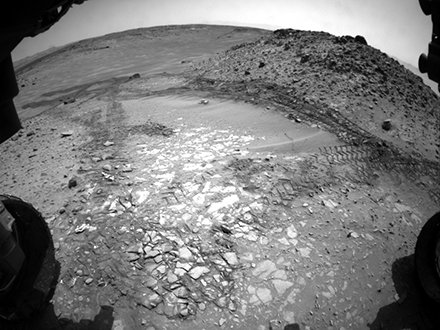 The pale rocks in the foreground of this Aug. 14, 2014, image from NASA's Curiosity Mars rover include the "Bonanza King" target under consideration to become the fourth rock drilled by the rover.› Full image and caption
Credit: NASA/JPL-Caltech 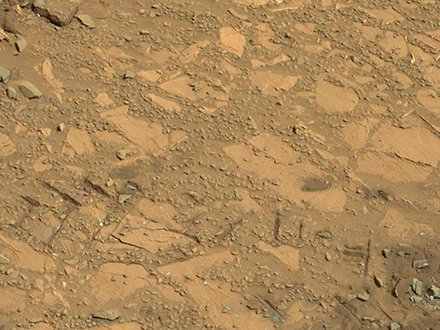 This Aug. 12, 2012, image from the Mastcam on NASA's Curiosity Mars rover shows an outcrop that includes the "Bonanza King" rock under consideration as a drilling target.› Full image and caption
Credit: NASA/JPL-Caltech/MSSS

Backtracking to get NASA's one-ton Mars rover away from slippery sand has brought the rover to its next candidate rock for drilling.

The team operating NASA's Curiosity Mars rover has chosen a rock that looks like a pale paving stone as the mission's fourth drilling target, if it passes engineers' evaluation.

They call it "Bonanza King."

It is not at the "Pahrump Hills" site the team anticipated the rover might reach by mid-August. Unexpected challenges while driving in sand prompted the mission to reverse course last week after entering a valley where ripples of sand fill the floor and extend onto sloping margins. However, the new target outcrop's brightness and its position within the area's geological layers resemble the Pahrump Hills outcrop.

"Geologically speaking, we can tie the Bonanza King rocks to those at Pahrump Hills. Studying them here will give us a head start in understanding how they fit into the bigger picture of Gale Crater and Mount Sharp," said Curiosity Deputy Project Scientist Ashwin Vasavada of NASA's Jet Propulsion Laboratory in Pasadena, California.

Mount Sharp is the mission's long-term science destination, offering a stack of layers holding evidence about environmental changes on ancient Mars. The mountain rises from inside Gale Crater, where Curiosity landed in August 2012. All three rocks the rover has drilled so far have been geologically associated with the crater floor, rather than the mountain. Sample material pulled from the first two and delivered to Curiosity's onboard analytical laboratories in 2013 provided evidence for ancient environmental conditions favorable for microbial life. A drilled sample from Bonanza King may add understanding about how environments varied and evolved.

"This rock has an appearance quite different from the sandstones we've been driving through for several months," Vasavada said. "The landscape is changing, and that's worth checking out."

It lies in one of several patches of similar-looking slabs, up to about the size of dinner plates, on the ramp at the northeastern end of sandy-floored "Hidden Valley." Curiosity passed over them early last week when it entered the valley, headed toward Pahrump Hills and, beyond that, toward the planned entry point to Mount Sharp's slopes.

The rover's wheels slipped more in Hidden Valley's sand than the team had expected based on experience with one of the mission's test rovers driven on sand dunes in California. The valley is about the length of a football field and does not offer any navigable exits other than at the northeastern and southwestern ends.

"We need to gain a better understanding of the interaction between the wheels and Martian sand ripples, and Hidden Valley is not a good location for experimenting," said Curiosity Project Manager Jim Erickson of JPL.

Terrain with sharp rocks that Curiosity has previously navigated tore holes in the rover's wheels. Sandy terrain could still be part of the rover's route to Mount Sharp. Compared to sharp-rock terrain, sandy ground could reduce the pace of wheel damage. In some sandy areas, ripples don't cover the ground deeply wall-to-wall, as they do in Hidden Valley.

Curiosity reversed course and drove out of Hidden Valley northeastward. On the way toward gaining a good viewpoint to assess a possible alternative route north of the valley, it passed over the pale paving stones on the ramp again. Where a rover wheel cracked one of the rocks, it exposed bright interior material, possibly from mineral veins.

This summer, Curiosity's team has developed a plan for compressing the multi-day schedule of rover activities involved in collecting a drilled rock sample and delivering the sample for onboard analysis. This "condensed drilling" plan requires adjustment of staffing levels for several days, due to the complexity of the rover activities involved. The needed staffing had been slated for mid-August in anticipation of getting to Pahrump Hills.

"We considered postponing the first condensed drilling, and we considered other possible drilling targets, but this outcrop on the ramp is too appealing to pass up," Vasavada said.

One step in assessing whether Bonanza King can be drilled will be to check whether the individual plates of the outcrop are loose. During the drilling campaign, the team will also be analyzing possible routes to Mount Sharp and planning how to better understand how the rover's wheels interact with Martian sand ripples.