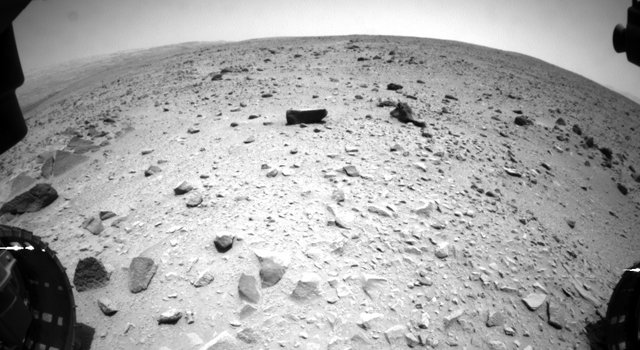 NASA's Curiosity Mars rover captured this image with its left front Hazard-Avoidance Camera (Hazcam) just after completing a drive that took the mission's total driving distance past the 1 kilometer (0.62 mile) mark. The image was taken on July 16, 2013, during the afternoon of 335th Martian day, or sol, of Curiosity's work on Mars. The view is in the direction of the next planned drive, toward the southwest. Portions of the rover's left and right front wheels are visible at the sides of the scene.› Full image and caption
Credit: NASA/JPL-Caltech

The latest drive by NASA's Curiosity Mars rover brought the total distance that the rover has driven on Mars to more than 1 kilometer.

PASADENA, Calif. - The latest drive by NASA's Curiosity Mars rover brought the total distance that the rover has driven on Mars to more than 1 kilometer. One kilometer is about 0.62 mile.

The drive covered about 38 meters (125 feet) and brought the mission's odometry to about 1.029 kilometers (3,376 feet). The drive was completed in the early afternoon of the rover's 335th Martian day, or sol, of work on Mars (July 17). It continued progress in a multi-month trek begun this month toward a mountain destination.

"When I saw that the drive had gone well and passed the kilometer mark, I was really pleased and proud," said rover driver Frank Hartman of NASA's Jet Propulsion Laboratory, Pasadena, Calif. "Hopefully, this is just the first of many kilometers to come."

Yesterday was is halfway through the mission's prime mission of one Martian year. Two weeks ago, Curiosity finished investigating science targets in the Glenelg area, about half a kilometer (500 yards) east of where the one-ton rover landed on Aug. 5, 2012, PDT (Aug. 6, Universal Time). The mission's next major destination is at the lower layers of Mount Sharp, about 8 kilometers (5 miles) southwest of Glenelg.

Mount Sharp, in the middle of Gale Crater, exposes many layers where scientists anticipate finding evidence about how the ancient Martian environment changed and evolved. At targets in the Glenelg area, the rover already accomplished the mission's main science objective by finding evidence for an ancient wet environment that had conditions favorable for microbial life.