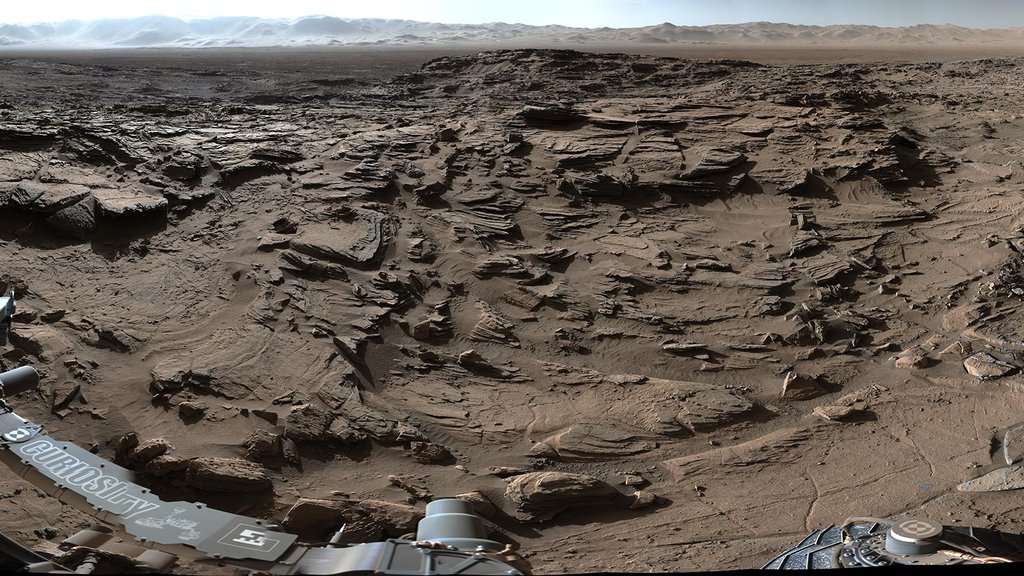 This 360-degree panorama from the Mastcam on NASA's Curiosity Mars rover shows the rugged surface of "Naukluft Plateau" plus upper Mount Sharp at right and part of the rim of Gale Crater.› Full image and caption
Credit: NASA/JPL-Caltech/MSSS 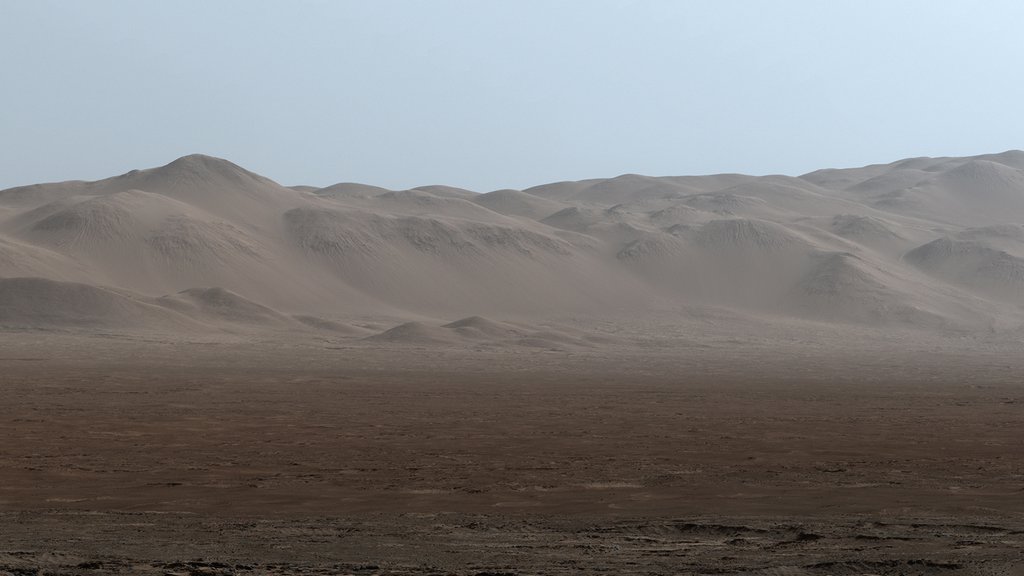 This early-morning view from the Mastcam on NASA's Curiosity Mars rover on March 16, 2016, covers a portion of the inner wall of Gale Crater. At right, the image fades into glare of the rising sun.› Full image and caption
Credit: NASA/JPL-Caltech/MSSS 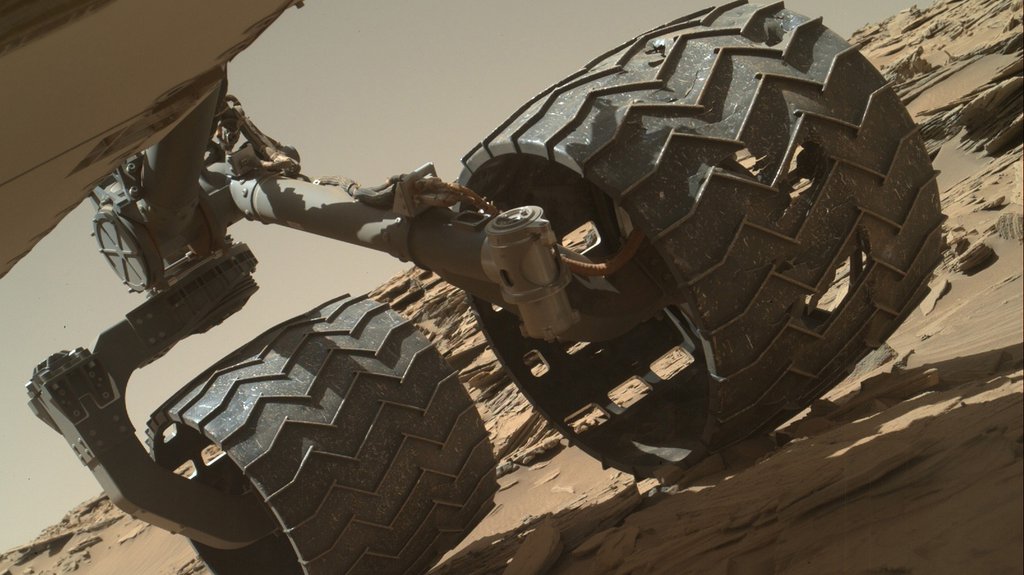 The team operating NASA's Curiosity Mars rover uses the MAHLI camera on the rover's arm to check the condition of the wheels at routine intervals.› Full image and caption
Credit: NASA/JPL-Caltech/MSSS

The rover climbed onto the "Naukluft Plateau" of lower Mount Sharp in early March after spending several weeks investigating sand dunes. The plateau's sandstone bedrock has been carved by eons of wind erosion into ridges and knobs. The path of about a quarter mile (400 meters) westward across it is taking Curiosity toward smoother surfaces leading to geological layers of scientific interest farther uphill.

The roughness of the terrain on the plateau raised concern that driving on it could be especially damaging to Curiosity's wheels, as was terrain Curiosity crossed before reaching the base of Mount Sharp. Holes and tears in the rover's aluminum wheels became noticeable in 2013. The rover team responded by adjusting the long-term traverse route, revising how local terrain is assessed and refining how drives are planned. Extensive Earth-based testing provided insight into wheel longevity.

The rover team closely monitors wear and tear on Curiosity's six wheels. "We carefully inspect and trend the condition of the wheels," said Steve Lee, Curiosity's deputy project manager at NASA's Jet Propulsion Laboratory, Pasadena, California. "Cracks and punctures have been gradually accumulating at the pace we anticipated, based on testing we performed at JPL. Given our longevity projections, I am confident these wheels will get us to the destinations on Mount Sharp that have been in our plans since before landing."

Inspection of the wheels after crossing most of the Naukluft Plateau has indicated that, while the terrain presented challenges for navigation, driving across it did not accelerate damage to the wheels.

On Naukluft Plateau, the rover's Mast Camera has recorded some panoramic scenes from the highest viewpoints Curiosity has reached since its August 2012 landing on the floor of Gale Crater on Mars. Examples are available online at these sites:

The scenes show wind-sculpted textures in the sandstone bedrock close to the rover, and Gale Crater's rim rising above the crater floor in the distance. Mount Sharp stands in the middle of the crater, which is about 96 miles (154 kilometers) in diameter.

The next part of the rover's route will return to a type of lake-deposited mudstone surface examined previously. Farther ahead on lower Mount Sharp are three geological units that have been key destinations for the mission since its landing site was selected. One of the units contains an iron-oxide mineral called hematite, which was detected from orbit. Just above it lies a band rich in clay minerals, then a series of layers that contain sulfur-bearing minerals called sulfates. By examining them with Curiosity, researchers hope to gain a better understanding of how long ancient environmental conditions remained favorable for microbial life, if it was ever present on Mars, before conditions became drier and less favorable.

Each of Curiosity's six wheels is about 20 inches (50 centimeters) in diameter and 16 inches (40 centimeters) wide, milled out of solid aluminum. Most of the wheel's circumference is a metallic skin that is about half the thickness of a U.S. dime. Nineteen zigzag-shaped treads, called grousers, extend about a quarter inch (three-fourths of a centimeter) outward from the skin of each wheel. The grousers bear much of the rover's weight and provide most of the traction and ability to traverse over uneven terrain.

The holes seen in the wheels so far perforate only the skin. Wheel-monitoring images obtained every 547 yards (500 meters) have not yet shown any grouser breaks on Curiosity. Earth-based testing examined long-term wear characteristics and the amount of damage a rover wheel can sustain before losing its usefulness for driving. The tests indicate that when three grousers on a wheel have broken, that wheel has reached about 60 percent of its useful mileage.

At a current odometry of 7.9 miles (12.7 kilometers) since its August 2012 landing, Curiosity's wheels are projected to have more than enough life remaining to investigate the hematite, clay and sulfate units ahead, even in the unlikely case that up to three grousers break soon. The driving distance to the start of the sulfate-rich layers is roughly 4.7 miles (7.5 kilometers) from the rover's current location.

Curiosity reached the base of Mount Sharp in 2014 after fruitfully investigating outcrops closer to its landing site and then trekking to the layered mountain. For more information about Curiosity, visit: