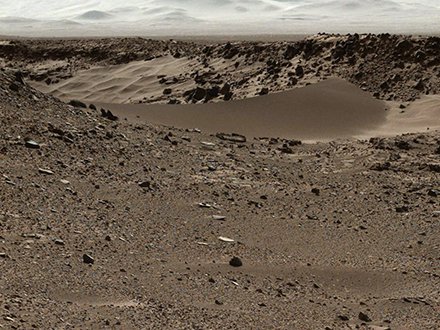 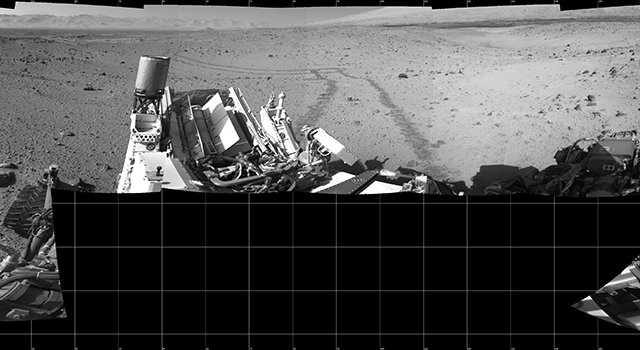 This mosaic of images from the Navigation Camera (Navcam) on NASA's Mars rover Curiosity shows the terrain surrounding the rover's position on the 524th Martian day, or sol, of the mission (Jan. 26, 2014).› Full image and caption
Credit: NASA/JPL-Caltech 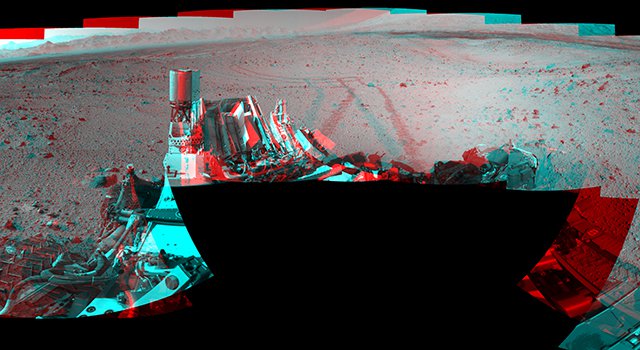 This stereo mosaic of images from the Navigation Camera (Navcam) on NASA's Mars rover Curiosity shows the terrain surrounding the rover's position on the 524th Martian day, or sol, of the mission (Jan. 26, 2014).› Full image and caption
Credit: NASA/JPL-Caltech 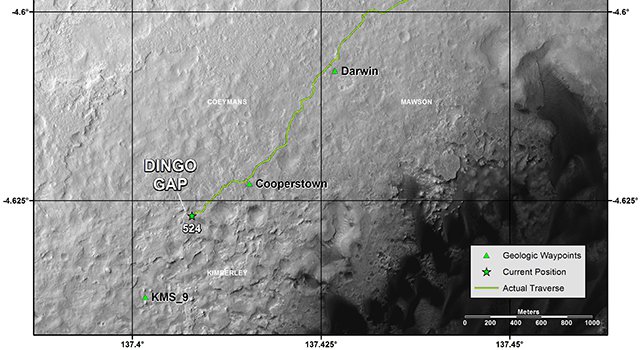 This map shows the route that NASA's Curiosity Mars rover drove inside Gale Crater from its landing in August 2013 through the 524th Martian day, or sol, of the mission (Jan. 26, 2014).› Full image and caption
Credit: NASA/JPL-Caltech/Univ. of Arizona 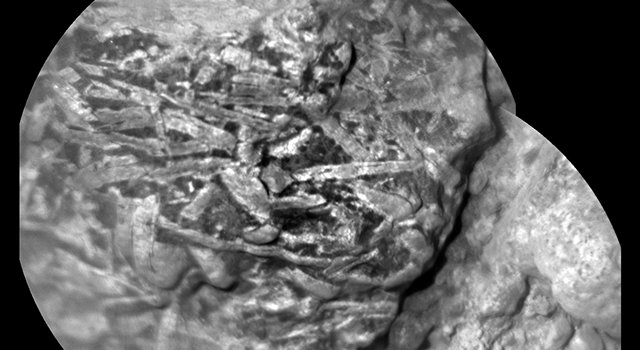 As NASA's Mars rover Curiosity is progressing toward Mount Sharp, researchers are using the rover's instruments to examine soils and rocks in Gale Crater.› Full image and caption
Credit: NASA/JPL-Caltech/LANL/CNES/IRAP/LPGNantes/CNRS/IAS 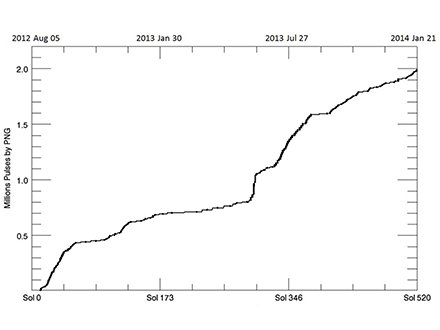 The Russian-made instrument on NASA's Mars rover Curiosity for detecting water that is adsorbed into soil or bound into shallow underground minerals has fired its 2 millionth pulse of energetic neutrons into the ground.› Full image and caption
Credit: NASA/JPL-Caltech/Russian Space Research Institute

A favorable route would skirt some terrain with sharp rocks considered more likely to poke holes in the rover's aluminum wheels.

While the team has been assessing ways to reduce wear and tear to the wheels, Curiosity has made progress toward a next site for drilling a rock sample and also toward its long-term destination: geological layers exposed on slopes of Mount Sharp. The rover has driven into a mapping quadrant that includes a candidate site for drilling. Meanwhile, testing on Earth is validating capabilities for drilling into rocks on slopes the rover will likely encounter on Mount Sharp.

Accumulation of punctures and rips in the wheels accelerated in the fourth quarter of 2013. Among the responses to that development, the team now drives the rover with added precautions, thoroughly checks the condition of Curiosity's wheels frequently, and is evaluating routes and driving methods that could avoid some wheel damage.

A dune about 3 feet (1 meter) high spans the gap between two scarps that might be a gateway to a southwestward route over relatively smooth ground. Curiosity is approaching the site, "Dingo Gap," from the southeast. The team is using images from the rover to assess whether to cross the dune.

"The decision hasn't been made yet, but it is prudent to go check," said Jim Erickson of NASA's Jet Propulsion Laboratory, Pasadena, Calif., project manager for Curiosity. "We'll take a peek over the dune into the valley immediately to the west to see whether the terrain looks as good as the analysis of orbital images implies." The orbital images come from the High Resolution Imaging Science Experiment (HiRISE) camera on NASA's Mars Reconnaissance Orbiter.

Other routes have also been evaluated for getting Curiosity from the rover's current location to a candidate drilling site called "KMS-9." That site lies about half a mile (800 meters) away by straight line, but considerably farther by any of the driving routes assessed. Characteristics seen in orbital imagery of the site appeal to Curiosity's science team. "At KMS-9, we see three terrain types exposed and a relatively dust-free surface," said science team collaborator Katie Stack of the California Institute of Technology, Pasadena.

Before Curiosity's landing inside Gale Crater, the mission's science team used images from orbit to map terrain types in a grid of 140 square quadrants, each about 0.9 mile (1.5 kilometers) wide. Curiosity landed in the "Yellowknife" quadrant and subsequently crossed parts of quadrants called "Mawson" and "Coeymans." This month, it entered the "Kimberley" quadrant, home of KMS-9.

Stack said, "This area is appealing because we can see terrain units unlike any that Curiosity has visited so far. One unit has striations all oriented in a similar direction. Another is smooth, without striations. We don't know yet what they are. The big draw is exploration and seeing new things."

Science investigations have continued along with recent drives. One rock examined on Jan. 15, "Harrison," revealed linear crystals with feldspar-rich composition.

To prepare for destinations farther ahead, engineers are using a test rover at JPL to check the rover's ability to tolerate slight slippage on slopes while using its drill. With the drill bit in a rock, tests simulating slips of up to about 2 inches (5 centimeters) have not caused damage.

"These tests are building confidence for operations we are likely to use when Curiosity is on the slopes of Mount Sharp," said JPL's Daniel Limonadi, systems engineering leader for surface sampling with the rover's arm.

Other testing at JPL is evaluating possible driving techniques that might help reduce the rate of wheel punctures, such as driving backwards or using four-wheel drive instead of six-wheel drive. Some of the wheel damage may result from the force of rear wheels pushing middle or front wheels against sharp rocks, rather than simply the weight of the rover driving over the rocks.

"An analogy is when you are rolling your wheeled luggage over a curb, you can feel the difference between trying to push it over the curb or pull it over the curb," said JPL's Richard Rainen, mechanical engineering team leader for Curiosity.

While continuing to evaluate routes and driving techniques, Curiosity's team will add some weekend and evening shifts in February to enable planning more drives than would otherwise be possible.

NASA's Mars Science Laboratory Project is using Curiosity to assess ancient habitable environments and major changes in Martian environmental conditions. JPL, a division of the California Institute of Technology in Pasadena, built the rover and manages the project for NASA's Science Mission Directorate in Washington. For more information about Curiosity, visit http://www.nasa.gov/msl and http://mars.jpl.nasa.gov/msl/ . You can follow the mission on Facebook at http://www.facebook.com/marscuriosity and on Twitter at: http://www.twitter.com/marscuriosity .