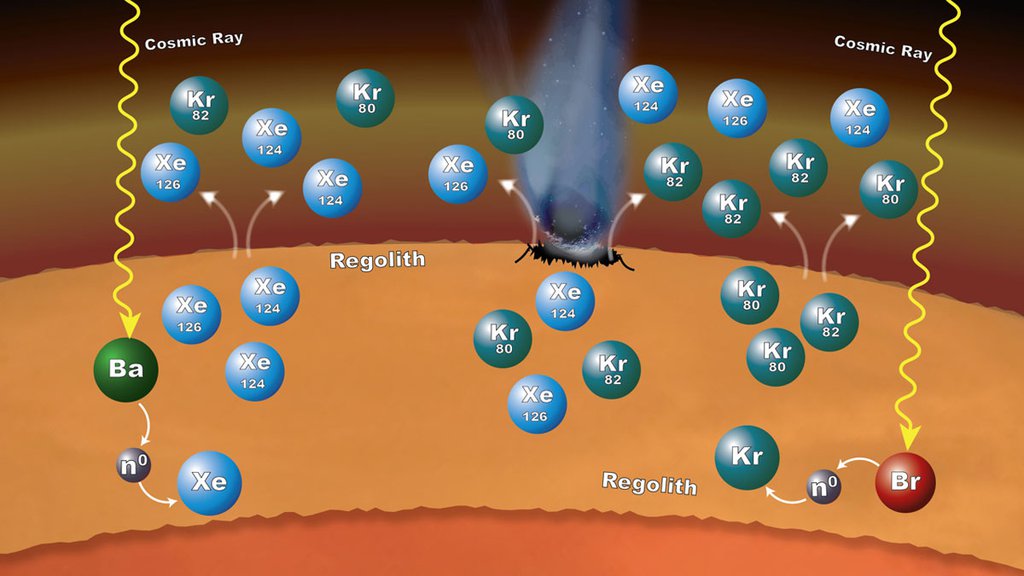 NASA's Curiosity rover has found evidence that chemistry in the surface material on Mars contributed to the makeup of its atmosphere.

NASA's Curiosity rover has found evidence that chemistry in the surface material on Mars contributed dynamically to the makeup of its atmosphere over time. It's another clue that the history of the Red Planet's atmosphere is more complex and interesting than a simple legacy of loss.

The findings come from the rover's Sample Analysis at Mars, or SAM, instrument suite, which studied the gases xenon and krypton in Mars' atmosphere. The two gases can be used as tracers to help scientists investigate the evolution and erosion of the Martian atmosphere. A lot of information about xenon and krypton in Mars' atmosphere came from analyses of Martian meteorites and measurements made by the Viking mission.

"What we found is that earlier studies of xenon and krypton only told part of the story," said Pamela Conrad, lead author of the report and SAM's deputy principal investigator at NASA's Goddard Space Flight Center in Greenbelt, Maryland. "SAM is now giving us the first complete in situ benchmark against which to compare meteorite measurements."

Overall, the analysis agreed with earlier studies, but some isotope ratios were a bit different than expected. When working on an explanation for those subtle but important differences, the researchers realized that neutrons might have gotten transferred from one chemical element to another within the surface material on Mars. The process is called neutron capture, and it would explain why a few selected isotopes were more abundant than previously thought possible.

In particular, it looks as if some of the barium surrendered neutrons that got picked up by xenon to produce higher-than-expected levels of the isotopes xenon-124 and 126. Likewise, bromine might have surrendered some of its neutrons to produce unusual levels of krypton-80 and krypton-82.

These isotopes could have been released into the atmosphere by impacts on the surface and by gas escaping from the regolith, which is the soil and broken rocks of the surface.

"SAM's measurements provide evidence of a really interesting process in which the rock and unconsolidated material at the planet's surface have contributed to the xenon and krypton isotopic composition of the atmosphere in a dynamic way," said Conrad.

The atmospheres of Earth and Mars exhibit very different patterns of xenon and krypton isotopes, particularly for xenon-129. Mars has much more of it in the atmosphere than does Earth.

"The unique capability to measure in situ the six and nine different isotopes of krypton and xenon allows scientists to delve into the complex interactions between the Martian atmosphere and crust," said Michael Meyer, lead scientist for the Mars Exploration Program at NASA Headquarters in Washington. "Discovering these interactions through time allows us to gain a greater understanding of planetary evolution."

The research paper is available at: