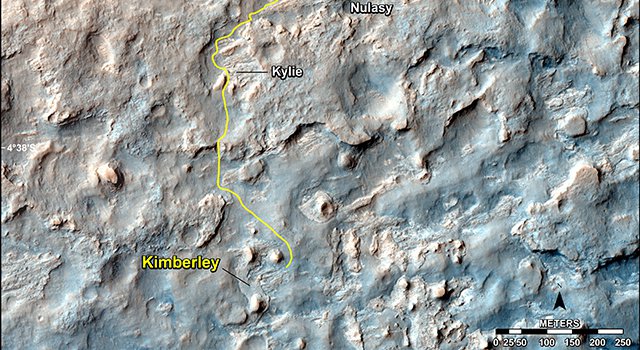 This map shows the route driven and route planned for NASA's Curiosity Mars rover from before reaching "Dingo Gap" -- in upper right -- to the mission's next science waypoint, "Kimberley" (formerly referred to as "KMS-9") -- in lower left.› Full image and caption
Credit: NASA/JPL-Caltech/Univ. of Arizona 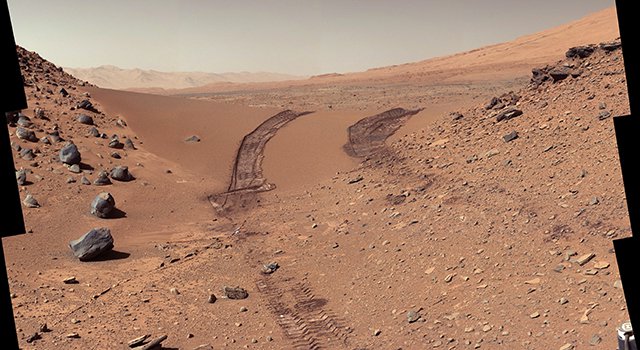 This look back at a dune that NASA's Curiosity Mars rover drove across was taken by the rover's Mast Camera (Mastcam) during the 538th Martian day, or sol, of Curiosity's work on Mars (Feb. 9, 2014).› Full image and caption
Credit: NASA/JPL-Caltech/MSSS 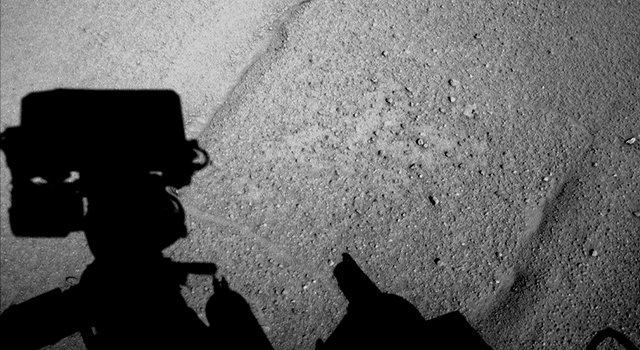 NASA's Curiosity Mars rover caught its own shadow in this image taken just after completing a drive of 329 feet (100.3 meters) on the 547th Martian day, or sol, of the rover's work on Mars (Feb. 18, 2014).› Full image and caption
Credit: NASA/JPL-Caltech

On Tuesday, Feb. 18, the rover covered 329 feet (100.3 meters), the mission's first long trek that used reverse driving and its farthest one-day advance of any kind in more than three months.

The reverse drive validated feasibility of a technique developed with testing on Earth to lessen damage to Curiosity's wheels when driving over terrain studded with sharp rocks. However, Tuesday's drive took the rover over more benign ground.

"We wanted to have backwards driving in our validated toolkit because there will be parts of our route that will be more challenging," said Curiosity Project Manager Jim Erickson of NASA's Jet Propulsion Laboratory, Pasadena, Calif.

The rover team used images taken from orbit to reassess possible routes, after detecting in late 2013 that holes in the vehicle's aluminum wheels were accumulating faster than anticipated. Getting to the chosen route, which appeared to be less hazardous for the wheels, required crossing a 3-foot-tall (1-meter-tall) dune. Curiosity crossed the dune on Feb. 9.

Erickson said, "After we got over the dune, we began driving in terrain that looks like what we expected based on the orbital data. There are fewer sharp rocks, many of them are loose, and in most places there's a little bit of sand cushioning the vehicle."

The mission's destinations remain the same: a science waypoint first and then the long-term goal of investigating the lower slopes of Mount Sharp, where water-related minerals have been detected from orbit.

The science waypoint, which may be where Curiosity next uses its sample-collecting drill, is an intersection of different rock layers about two-thirds of a mile (about 1.1 kilometers) ahead on the planned route. This location, formerly called KMS-9 from when it was one of many waypoint candidates, is now called "Kimberley," for the geological mapping quadrant that contains it. The mapping quadrant was named for the northwestern Australia region with very old rocks.

While the rover is headed for the Kimberley waypoint and during the time it spends doing science investigations there, the team will use orbital imagery to choose a path for continuing toward the long-term destination.

"We have changed our focus to look at the big picture for getting to the slopes of Mount Sharp, assessing different potential routes and different entry points to the destination area," Erickson said. "No route will be perfect; we need to figure out the best of the imperfect ones."

NASA's Mars Science Laboratory Project is using Curiosity to assess ancient habitable environments and major changes in Martian environmental conditions. JPL, a division of the California Institute of Technology in Pasadena, built the rover and manages the project for NASA's Science Mission Directorate in Washington. For more information about Curiosity, visit http://www.jpl.nasa.gov/msl , http://www.nasa.gov/msl and http://mars.jpl.nasa.gov/msl/. You can follow the mission on Facebook at http://www.facebook.com/marscuriosity and on Twitter at: http://www.twitter.com/marscuriosity.