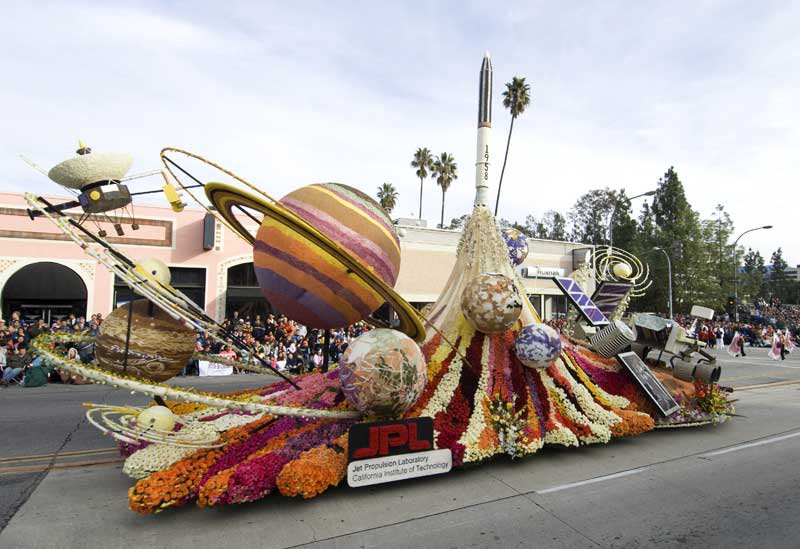 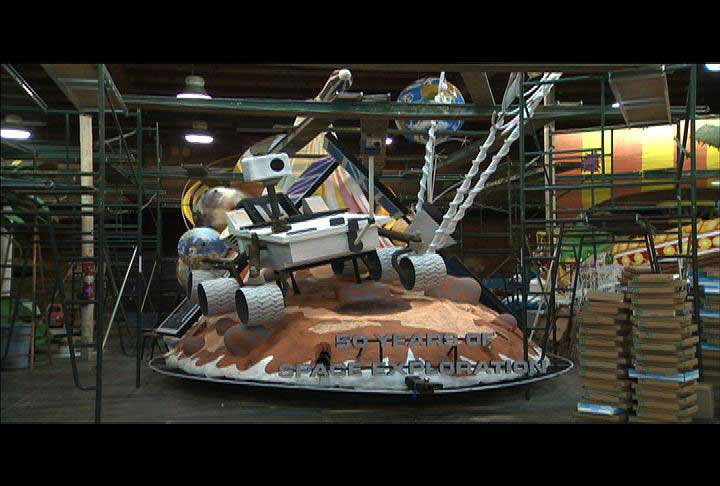 Volunteers from JPL are helping with the finishing touches on the Lab's Rose Parade float saluting 50 Years of Space Exploration.

"In January 2008 we celebrate the 50th Anniversary of Explorer 1, the first American satellite, which was built at JPL.  This is a historic milestone not only for the Jet Propulsion Laboratory, Caltech and Pasadena, but for the country," said Charles Elachi, director of JPL. "I can think of nothing better than kicking off the celebration with a float in the ultimate New Year's pageant, the Rose Parade." JPL is managed for NASA by the California Institute of Technology in Pasadena.

More information on the Explorer 1 anniversary, including a video chronicling its history, is available at: http://www.jpl.nasa.gov/explorer/ .

On the parade float, Explorer 1 fires off the launch pad at the center. In its wake arises a collection of historic JPL robotic explorers, as well as planetary ports of call. On one of the solar panels displays a floral "photographic" representation of the Explorer pioneers whose vision ignited the spark for U.S. space exploration -- William Pickering, then director of JPL, scientist James Van Allen and rocket designer Wernher von Braun. Ascending from Explorer's fiery plume are a Martian orbiter and a six-wheeled Mars Science Laboratory, which in 2010 will carry on the tradition of NASA/JPL robotic exploration. On the other edge of the plume, climbing beyond the garland of rings surrounding the planet Saturn is JPL's Voyager 1 - humanity's most distant emissary - which is now on its journey headed into interstellar space.

The successful launch of Explorer 1 marked the beginning of a half-century of space exploration. By late 1958, JPL was transferred to the newly created National Aeronautics and Space Administration. JPL manages 19 spacecraft and six instruments that are currently exploring our home planet, our solar system and the larger universe. At Mars alone, NASA/JPL has four spacecraft explorers. In May 2008, that number will increase by one when the Phoenix lander attempts a dramatic touchdown near the Martian north pole. Other recent JPL missions include understanding the Earth's oceans and atmosphere (Jason), penetrating deep into a comet (Deep Impact), visiting asteroids (Dawn), exploring the rings of Saturn and its moons (Cassini), and peering into the distant edge of the universe (Spitzer Space Telescope and Galaxy Evolution Explorer).

For more information about JPL on the Internet, visit http://www.jpl.nasa.gov .

NOTE TO MEDIA: Reporters interested in covering JPL personnel working on the float are invited to stop by on Friday, Dec. 28, between 10 a.m. and 1 p.m. Pacific time. Location: Rosemont Pavilion, 700 Seco St., Pasadena. In addition, a related video file of float preparations is airing on NASA-TV, with scheduling information online at http://www.nasa.gov/multimedia/nasatv/index.html .