Cosmology Standard Candle not so Standard After All 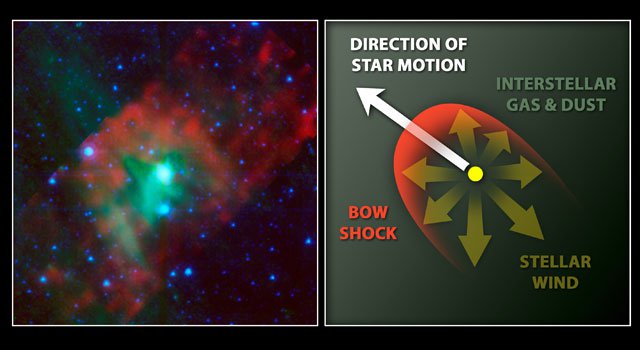 This image layout illustrates how NASA's Spitzer Space Telescope was able to show that a "standard candle" used to measure cosmological distances is shrinking -- a finding that affects precise measurements of the age, size and expansion rate of our universe.› Full image and caption
Credit: NASA/JPL-Caltech/Iowa State

Astronomers have turned up the first direct proof that "standard candles" used to illuminate the size of the universe, termed Cepheids, shrink in mass, making them not quite as standard as once thought.

PASADENA, Calif. -- Astronomers have turned up the first direct proof that "standard candles" used to illuminate the size of the universe, termed Cepheids, shrink in mass, making them not quite as standard as once thought. The findings, made with NASA's Spitzer Space Telescope, will help astronomers make even more precise measurements of the size, age and expansion rate of our universe.

Standard candles are astronomical objects that make up the rungs of the so-called cosmic distance ladder, a tool for measuring the distances to farther and farther galaxies. The ladder's first rung consists of pulsating stars called Cepheid variables, or Cepheids for short. Measurements of the distances to these stars from Earth are critical in making precise measurements of even more distant objects. Each rung on the ladder depends on the previous one, so without accurate Cepheid measurements, the whole cosmic distance ladder would come unhinged.

Now, new observations from Spitzer show that keeping this ladder secure requires even more careful attention to Cepheids. The telescope's infrared observations of one particular Cepheid provide the first direct evidence that these stars can lose mass-or essentially shrink. This could affect measurements of their distances.

"We have shown that these particular standard candles are slowly consumed by their wind," said Massimo Marengo of Iowa State University, Ames, Iowa, lead author of a recent study on the discovery appearing in the Astronomical Journal. "When using Cepheids as standard candles, we must be extra careful because, much like actual candles, they are consumed as they burn."

The star in the study is Delta Cephei, which is the namesake for the entire class of Cepheids. It was discovered in 1784 in the constellation Cepheus, or the King. Intermediate-mass stars can become Cepheids when they are middle-aged, pulsing with a regular beat that is related to how bright they are. This unique trait allows astronomers to take the pulse of a Cepheid and figure out how bright it is intrinsically-or how bright it would be if you were right next to it. By measuring how bright the star appears in the sky, and comparing this to its intrinsic brightness, it can then be determined how far away it must be.

This calculation was famously performed by astronomer Edwin Hubble in 1924, leading to the revelation that our galaxy is just one of many in a vast cosmic sea. Cepheids also helped in the discovery that our universe is expanding and galaxies are drifting apart.

Cepheids have since become reliable rungs on the cosmic distance ladder, but mysteries about these standard candles remain. One question has been whether or not they lose mass. Winds from a Cepheid star could blow off significant amounts of gas and dust, forming a dusty cocoon around the star that would affect how bright it appears. This, in turn, would affect calculations of its distance. Previous research had hinted at such mass loss, but more direct evidence was needed.

Marengo and his colleague used Spitzer's infrared vision to study the dust around Delta Cephei. This particular star is racing along through space at high speeds, pushing interstellar gas and dust into a bow shock up ahead. Luckily for the scientists, a nearby companion star happens to be lighting the area, making the bow shock easier to see. By studying the size and structure of the shock, the team was able to show that a strong, massive wind from the star is pushing against the interstellar gas and dust. In addition, the team calculated that this wind is up to one million times stronger than the wind blown by our sun. This proves that Delta Cephei is shrinking slightly.

Follow-up observations of other Cepheids conducted by the same team using Spitzer have shown that other Cepheids, up to 25 percent observed, are also losing mass.

"Everything crumbles in cosmology studies if you don't start up with the most precise measurements of Cepheids possible," said Pauline Barmby of the University of Western Ontario, Canada, lead author of the follow-up Cepheid study published online Jan. 6 in the Astronomical Journal. "This discovery will allow us to better understand these stars, and use them as ever more precise distance indicators."

The Spitzer observations were made before it ran out of its liquid coolant in May 2009 and began its warm mission.