Cooking up Alien Atmospheres on Earth 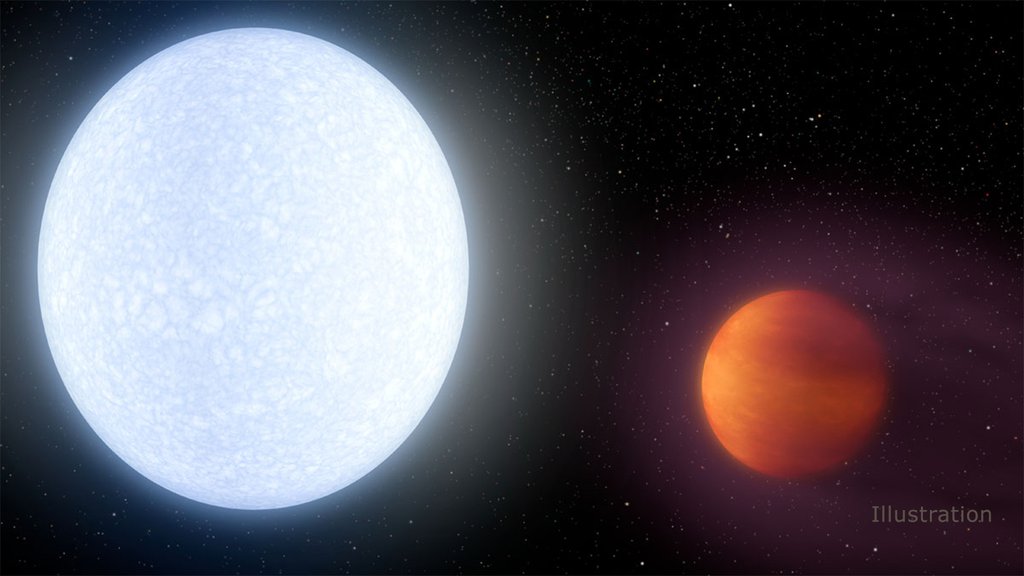 This artist's concept shows planet KELT-9b, an example of a "hot Jupiter," or a gas giant planet orbiting very close to its parent star. KELT-9b is an extreme example of a hot Jupiter, with dayside temperatures reaching 7,800 degrees Fahrenheit (4,300 Celcius).› Full image and caption
Credit: NASA/JPL-Caltech 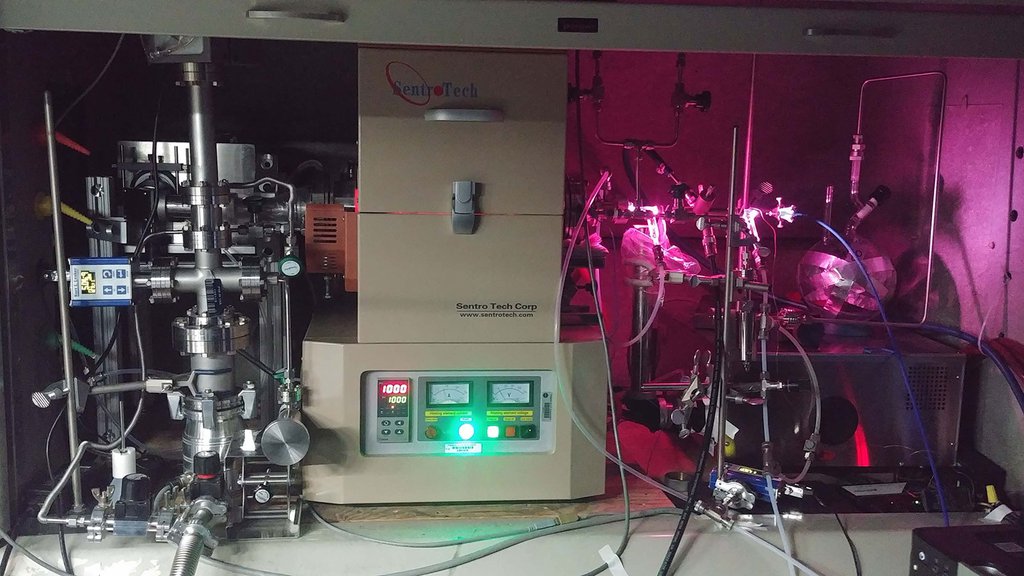 JPL scientists used the "oven" (center) to heat a mixture of hydrogen and carbon monoxide and subject it to UV radiation, generated by a hydrogen gas discharge lamp. The lamp radiates both visible light (the pink glow) and UV light, which enters the gas container inside the oven via a window on the right side.
Credit: NASA/JPL-Caltech

As scientists learn more about the array of planets beyond our solar system, they're cooking up exoplanet atmospheres in the lab to make sense of these exotic environments.

Researchers at NASA's Jet Propulsion Laboratory in Pasadena, California, are cooking up an alien atmosphere right here on Earth. In a new study, JPL scientists used a high-temperature "oven" to heat a mixture of hydrogen and carbon monoxide to more than 2,000 degrees Fahrenheit (1,100 Celsius), about the temperature of molten lava. The aim was to simulate conditions that might be found in the atmospheres of a special class of exoplanets (planets outside our solar system) called "hot Jupiters."

Hot Jupiters are gas giants that orbit very close to their parent star, unlike any of the planets in our solar system. While Earth takes 365 days to orbit the Sun, hot Jupiters orbit their stars in less than 10 days. Their close proximity to a star means their temperatures can range from 1,000 to 5,000 degrees Fahrenheit (530 to 2,800 degrees Celsius) or even hotter. By comparison, a hot day on the surface of Mercury (which takes 88 days to orbit the Sun) reaches about 800 degrees Fahrenheit (430 degrees Celsius).

"Though it is impossible to exactly simulate in the laboratory these harsh exoplanet environments, we can come very close," said JPL principal scientist Murthy Gudipati, who leads the group that conducted the new study, published last month in the Astrophysical Journal.

The team started with a simple chemical mixture of mostly hydrogen gas and 0.3 percent carbon monoxide gas. These molecules are extremely common in the universe and in early solar systems, and they could reasonably compose the atmosphere of a hot Jupiter. Then the team heated the mixture to between 620 and 2,240 degrees Fahrenheit (330 and 1,230 Celsius).

The team also exposed the laboratory brew to a high dose of ultraviolet radiation - similar to what a hot Jupiter would experience orbiting so close to its parent star. The UV light proved to be a potent ingredient. It was largely responsible for some of the study's more surprising results about the chemistry that might be taking place in these toasty atmospheres.

Hot Jupiters are large by planet standards, and they radiate more light than cooler planets. Such factors have allowed astronomers to gather more information about their atmospheres than most other types of exoplanets. Those observations reveal that many hot Jupiter atmospheres are opaque at high altitudes. Although clouds might explain the opacity, they become less and less sustainable as the pressure decreases, and the opacity has been observed where the atmospheric pressure is very low.

Scientists have been looking for potential explanations other than clouds, and aerosols - solid particles suspended in the atmosphere - could be one. However, according to the JPL researchers, scientists were previously unaware of how aerosols might develop in hot Jupiter atmospheres. In the new experiment, adding UV light to the hot chemical mix did the trick.

The small sapphire disk on the right shows organic aerosols formed inside a high-temperature oven. The disk to the left has not been used. Image Credit: NASA/JPL-Caltech
Larger view

"This result changes the way we interpret those hazy hot Jupiter atmospheres," said Benjamin Fleury, a JPL research scientist and lead author of the study. "Going forward, we want to study the properties of these aerosols. We want to better understand how they form, how they absorb light and how they respond to changes in the environment. All that information can help astronomers understand what they're seeing when they observe these planets."

The study yielded another surprise: The chemical reactions produced significant amounts of carbon dioxide and water. While water vapor has been found in hot Jupiter atmospheres, scientists for the most part expect this precious molecule to form only when there is more oxygen than carbon. The new study shows that water can form when carbon and oxygen are present in equal amounts. (Carbon monoxide contains one carbon atom and one oxygen atom.) And while some carbon dioxide (one carbon and two oxygen atoms) formed without the addition of UV radiation, the reactions accelerated with the addition of simulated starlight.

"These new results are immediately useful for interpreting what we see in hot Jupiter atmospheres," said JPL exoplanet scientist Mark Swain, a study coauthor. "We've assumed that temperature dominates the chemistry in these atmospheres, but this shows we need to look at how radiation plays a role."

With next-generation tools like NASA's James Webb Space Telescope, set to launch in 2021, scientists might produce the first detailed chemical profiles of exoplanet atmospheres, and it's possible that some of those first subjects will be hot Jupiters. These studies will help scientists learn how other solar systems form and how similar or different they are to our own.

For the JPL researchers, the work has just begun. Unlike a typical oven, theirs seals the gas in tightly to prevent leaks or contamination, and it allows the researchers to control the pressure of the gas as the temperature rises. With this hardware, they can now simulate exoplanet atmospheres at even higher temperatures: close to 3,000 degrees Fahrenheit (1,600 degrees Celsius).

"It's been an ongoing challenge figuring out how to design and operate this system successfully, since most standard components such as glass or aluminum melt at these temperatures," said JPL research scientist Bryana Henderson, a coauthor of the study. "We're still learning how to push these boundaries while safely handling these chemical processes in the lab. But at the end of the day, the exciting results that come out of these experiments is worth all the extra effort."