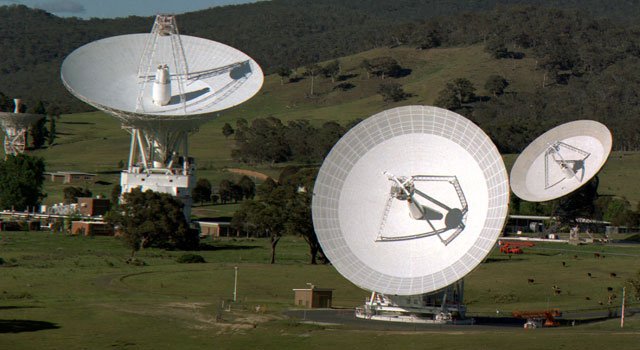 The Canberra Deep Space Communications Complex, located outside Canberra, Australia, is one of three complexes, which comprise NASA's Deep Space Network. In this image, the 70-meter (230-foot) antenna and the 34-meter (112-foot) antennas are working side-by-side.
Credit: NASA/JPL-Caltech

NASA has taken the next step toward a new generation of Deep Space Network antennas.

PASADENA, Calif. – NASA has taken the next step toward a new generation of Deep Space Network antennas. A $40.7 million contract with General Dynamics SATCOM Technologies, San Jose, Calif., covers implementation of two additional 34-meter (112-foot) antennas at Canberra, Australia. This is part of Phase I of a plan to eventually retire the network's aging 70-meter-wide (230-foot-wide) antennas.

The 34-meter beam waveguide antennas are essential to keep communications flowing smoothly as NASA's fleet of spacecraft continues to expand. In addition, the waveguide design of the antennas provides easier access for maintenance and future upgrades, because sensitive electronics are housed in a below-the-ground pedestal equipment room, instead of in the center of the dish.

"As a result of several studies, it was determined that arrays of 34-meter beam waveguide antennas were the best solution to long-term continuation of DSN 70-meter capabilities," said Miguel Marina, who manages the 70-meter replacement task force at NASA's Jet Propulsion Laboratory in Pasadena, Calif. "The new antennas are critical communication resources for all current and future NASA missions."

In 1958, NASA established the Deep Space Network as a separately managed and operated communications facility to accommodate all deep space missions. This avoided the need for each flight project to acquire its own specialized space communications network. During the Apollo period (1967-1972), these stations supported America's missions to the moon, including the historic first manned landing. The Goldstone antenna, in particular, captured Neil Armstrong's words and sent them on to American television sets while the images came through another antenna.

The Deep Space Network is now sending commands to numerous robotic spacecraft, such as NASA's Mars Exploration Rovers, the Spitzer Space Telescope, the Saturn explorer Cassini and the two Voyager spacecraft, which are near the edge of the solar system.