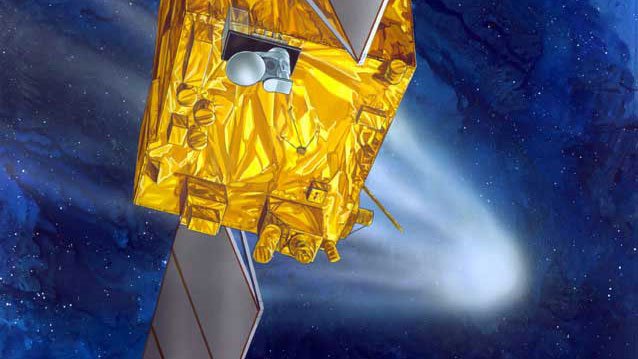 Twenty instruments on the European Space Agency's comet-chasing Rosetta spacecraft, including three from NASA, are in final tests for launch early next year.

Twenty instruments on the European Space Agency's comet-chasing Rosetta spacecraft, including three from NASA, are in final tests for launch early next year.

Launch from the Kourou spaceport in French Guiana, on the northeastern coast of South America, is scheduled for a 19-day window beginning Jan. 13, 2003. Shipment to Kourou last month from the European Space Research and Technology Centre in Noordwijk, the Netherlands, followed more than 10 months of rigorous testing. "With the move from Europe to Kourou, we have now entered the most exciting phase of the Rosetta program so far -- the launch campaign," said Claude Berner, Rosetta's payload and assembly, integration and verification manager.

NASA is funding three research instruments and a key part of a fourth for the collaborative mission. NASA also provides one of the Rosetta's interdisciplinary scientists, Dr. Paul Weissman, of NASA's Jet Propulsion Laboratory, Pasadena, Calif., and operational support from JPL's Deep Space Network of ground-based antennas. "Rosetta is an ambitious mission with great international cooperation," said JPL's Dr. Claudia Alexander, project scientist for the U.S. role in the mission. "We're eager to get it launched."

Rosetta will fly for nearly nine years, passing by two asteroids, by Earth twice and by Mars before reaching its destination, comet Wirtanen, in November 2011. At that point, the comet will be about four times as far from the Sun as Earth is. Then, as Rosetta orbits Wirtanen at distances as close as one kilometer (0.6 mile), the orbiter's instruments will examine how the comet changes while it moves closer to the Sun during the following 20 months. Rosetta will also drop a lander onto the surface of Wirtanen's icy nucleus. The NASA instruments will examine Wirtanen from the orbiter. International teams of scientists expect to see dramatic changes as the comet approaches the Sun. Gases and dust escaping from the surface of a comet form a cloud-like "coma" around the nucleus and a tail pointing away from the Sun.

Rosetta carries more instruments than any other spacecraft in history. The orbiter's payload includes a camera to study surface details, a microscope to analyze dust grains coming off the nucleus, spectrometers to examine surface and coma materials in various wavelengths, and an experiment to probe the comet's interior with radio waves.

With all instruments installed, the spacecraft was put through its paces during testing at the European Space Research and Technology Centre. It was placed in a large vacuum chamber while the instruments were tested in heat and cold simulating the extremes the spacecraft will experience when it is closest to the Sun and when it will be almost as distant as Jupiter. Vibration and acoustic tests demonstrated that the whole spacecraft can survive a launch environment. Another set of tests checked whether any instruments cause electromagnetic interference with any others. Verification of many essential functions included commanding the spacecraft from the European Space Operations Centre in Germany, just as it will be in orbit. At Kourou, each instrument will again be tested by itself and with the other instruments before engineers can finally declare everything "green" for launch.

JPL supplied the Microwave Instrument for Rosetta Orbiter, the first of its type for any interplanetary mission. This instrument can reveal the abundances of selected gases, their temperatures, the speed at which they're coming off the nucleus, and the temperature of the nucleus. Scientists will use it to monitor changes in how vapors are released from the nucleus as the coma and tail grow. They will be studying water, carbon monoxide, ammonia and methanol gases, four of the most abundant gases from comets. JPL's Dr. Samuel Gulkis is principal investigator.

The Southwest Research Institute, based in San Antonio, Texas, supplied two NASA instruments for Rosetta. One is named Alice. It is the first in a new generation of miniaturized ultraviolet spectrometers and is capable of analyzing the composition both of gases released by the comet and of the comet's surface. One goal of scientists using it will be to learn about the temperatures at which the comet formed and evolved by determining its abundances of noble gases, such as helium, neon and argon. Principal investigator for the ultraviolet instrument is Dr. Alan Stern of the institute's Space Studies Department in Boulder, Colo.

Dr. James Burch, of the institute's Instrumentation and Space Research Division, San Antonio, is principal investigator for Rosetta's Ion and Electron Spectrometer. This device will measure the environment of charged particles surrounding comet Wirtanen. It will also study the interaction between that environment and the solar wind of charged particles speeding outward from the Sun.

Key electronics for a fourth instrument, the Rosetta Orbiter Spectrometer for Ion and Neutral Analysis, have been supplied by the Lockheed Martin Advanced Technology Center, Palo Alto, Calif. This instrument will examine gases surrounding the comet.