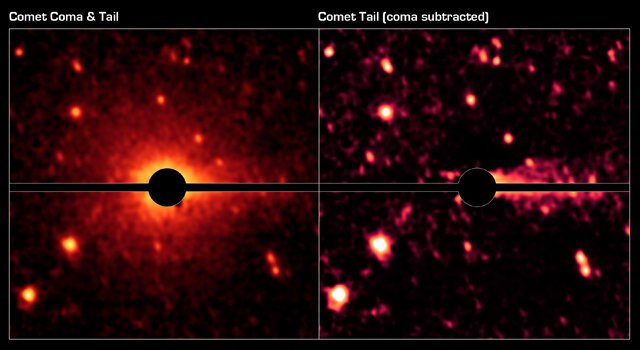 With the help of NASA's Spitzer Space Telescope, astronomers have discovered that what was thought to be a large asteroid called Don Quixote is in fact a comet.› Full image and caption
Credit: NASA/JPL-Caltech/DLR/NAU

For 30 years, a large near-Earth asteroid wandered its lone, intrepid path, passing before the scrutinizing eyes of scientists armed with telescopes while keeping something to itself. The object, known as Don Quixote, whose journey stretches to the orbit of Jupiter, now appears to be a comet.

The discovery resulted from an ongoing project coordinated by researchers at Northern Arizona University, Flagstaff, Ariz., using NASA's Spitzer Space Telescope. Through a lot of focused attention and a little luck, they found evidence of comet activity, which had evaded detection for three decades.

The results show that Don Quixote is not, in fact, a dead comet, as previously believed, but it has a faint coma and tail. In fact, this object, the third-biggest near-Earth asteroid known, skirts Earth with an erratic, extended orbit and is "sopping wet," said David Trilling of Northern Arizona University, with large deposits of carbon dioxide and presumably water ice. Don Quixote is about 11 miles (18 kilometers) long.

"This discovery of carbon dioxide emission from Don Quixote required the sensitivity and infrared wavelengths of the Spitzer telescope and would not have been possible using telescopes on the ground," said Michael Mommert, who conducted the research at the German Aerospace Center, Berlin, before moving to Northern Arizona University. This discovery implies that carbon dioxide and water ice might be present on other near-Earth asteroids, as well.

The implications have less to do with a potential impact, which is extremely unlikely in this case, and more with "the origins of water on Earth," Trilling said. Impacts with comets like Don Quixote over geological time may be the source of at least some of it, and the amount on Don Quixote represents about 100 billion tons of water -- roughly the same amount that can be found in Lake Tahoe, Calif.

Mommert presented the results at the European Planetary Science Congress in London on Sept. 10.

NASA's Jet Propulsion Laboratory, Pasadena, Calif., manages the Spitzer mission for NASA's Science Mission Directorate, Washington. Science operations are conducted at the Spitzer Science Center at the California Institute of Technology in Pasadena. Data are archived at the Infrared Science Archive housed at the Infrared Processing and Analysis Center at Caltech. Caltech manages JPL for NASA. For more information about Spitzer, visit http://spitzer.caltech.edu and http://www.nasa.gov/spitzer .