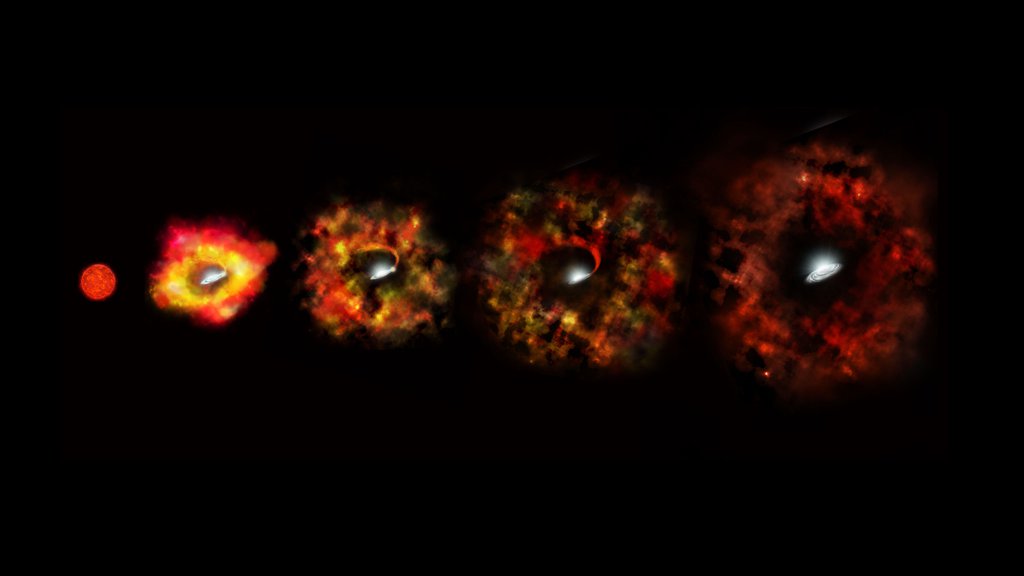 This illustration shows the final stages in the life of a supermassive star that fails to explode as a supernova, but instead implodes to form a black hole.› Full image and caption
Credit: NASA/ESA/P. Jeffries (STScI) 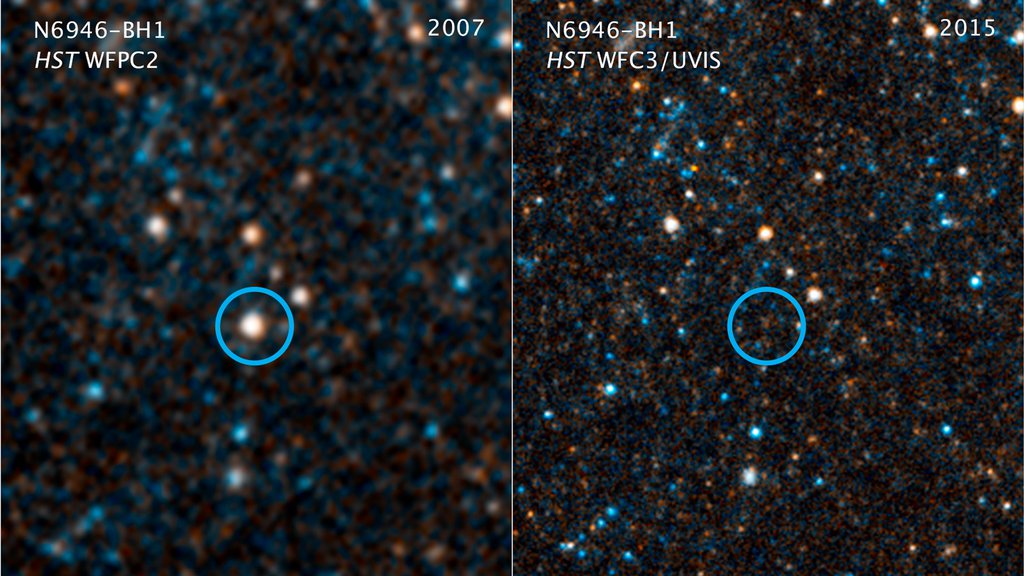 This pair of visible-light and near-infrared photos from NASA's Hubble Space Telescope shows the giant star N6946-BH1 before and after it vanished out of sight by imploding to form a black hole.› Full image and caption
Credit: NASA/ESA/C. Kochanek (OSU)

Astronomers have watched as a massive, dying star was likely reborn as a black hole.

Astronomers have watched as a massive, dying star was likely reborn as a black hole. It took the combined power of the Large Binocular Telescope (LBT), and NASA's Hubble and Spitzer space telescopes to go looking for remnants of the vanquished star, only to find that it disappeared out of sight.

It went out with a whimper instead of a bang.

The star, which was 25 times as massive as our sun, should have exploded in a very bright supernova. Instead, it fizzled out -- and then left behind a black hole.

"Massive fails" like this one in a nearby galaxy could explain why astronomers rarely see supernovae from the most massive stars, said Christopher Kochanek, professor of astronomy at The Ohio State University and the Ohio Eminent Scholar in Observational Cosmology.

As many as 30 percent of such stars, it seems, may quietly collapse into black holes --no supernova required.

"The typical view is that a star can form a black hole only after it goes supernova," Kochanek explained. "If a star can fall short of a supernova and still make a black hole, that would help to explain why we don't see supernovae from the most massive stars."

He leads a team of astronomers who published their latest results in the Monthly Notices of the Royal Astronomical Society.

Among the galaxies they've been watching is NGC 6946, a spiral galaxy 22 million light-years away that is nicknamed the "Fireworks Galaxy" because supernovae frequently happen there -- indeed, SN 2017eaw, discovered on May 14th, is shining near maximum brightness now. Starting in 2009, one particular star, named N6946-BH1, began to brighten weakly. By 2015, it appeared to have winked out of existence.

After the LBT survey for failed supernovas turned up the star, astronomers aimed the Hubble and Spitzer space telescopes to see if it was still there but merely dimmed. They also used Spitzer to search for any infrared radiation emanating from the spot. That would have been a sign that the star was still present, but perhaps just hidden behind a dust cloud.

All the tests came up negative. The star was no longer there. By a careful process of elimination, the researchers eventually concluded that the star must have become a black hole.

It's too early in the project to know for sure how often stars experience massive fails, but Scott Adams, a former Ohio State student who recently earned his Ph.D. doing this work, was able to make a preliminary estimate.

"N6946-BH1 is the only likely failed supernova that we found in the first seven years of our survey. During this period, six normal supernovae have occurred within the galaxies we've been monitoring, suggesting that 10 to 30 percent of massive stars die as failed supernovae," he said.

"This is just the fraction that would explain the very problem that motivated us to start the survey, that is, that there are fewer observed supernovae than should be occurring if all massive stars die that way."

To study co-author Krzysztof Stanek, the really interesting part of the discovery is the implications it holds for the origins of very massive black holes - the kind that the LIGO experiment detected via gravitational waves. (LIGO is the Laser Interferometer Gravitational-Wave Observatory.)

It doesn't necessarily make sense, said Stanek, professor of astronomy at Ohio State, that a massive star could undergo a supernova -- a process which entails blowing off much of its outer layers -- and still have enough mass left over to form a massive black hole on the scale of those that LIGO detected.

"I suspect it's much easier to make a very massive black hole if there is no supernova," he concluded.

Adams is now an astrophysicist at Caltech in Pasadena, California. Other co-authors were Ohio State doctoral student Jill Gerke and University of Oklahoma astronomer Xinyu Dai. Their research was supported by the National Science Foundation.

The Large Binocular Telescope is an international collaboration among institutions in the United Sates, Italy and Germany.

The Hubble Space Telescope is a project of international cooperation between NASA and ESA (European Space Agency). NASA's Goddard Space Flight Center in Greenbelt, Maryland, manages the telescope. The Space Telescope Science Institute in Baltimore, conducts Hubble science operations. STScI is operated for NASA by the Association of Universities for Research in Astronomy, Inc., in Washington.