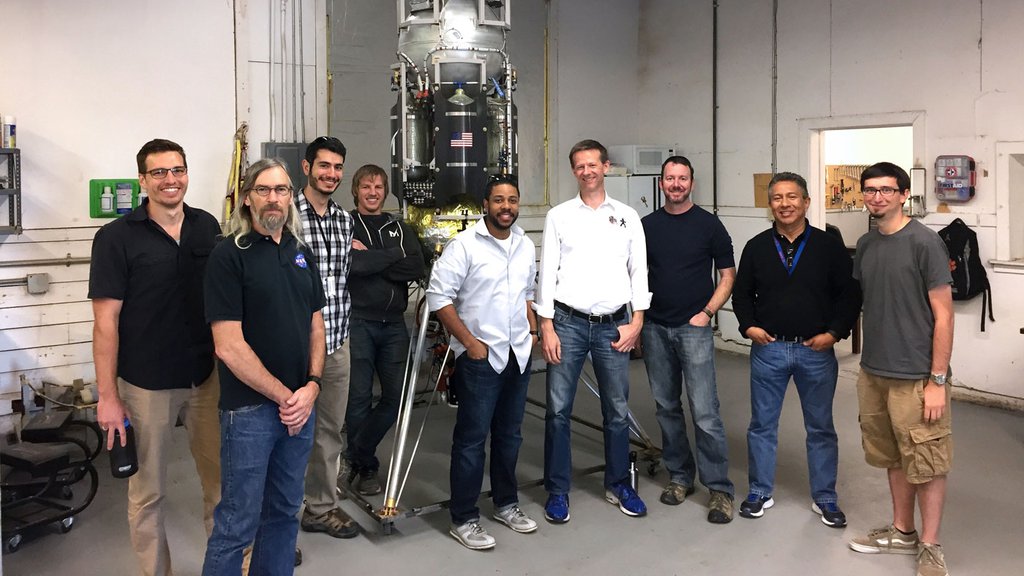 Team members from the NASA COBALT team and the Masten Xodiac team hold a pre-campaign Technical Interchange Meeting. The meeting is to iron out remaining technical hurdles and operations logistics in preparation for the COBALT payload integration onto Xodiac for the open-loop flight testing. The image is taken in the Masten Xodiac hangar, and Xodiac is in the background. The COBALT payload sits atop Xodiac in the empty payload frame.
Credit: NASA 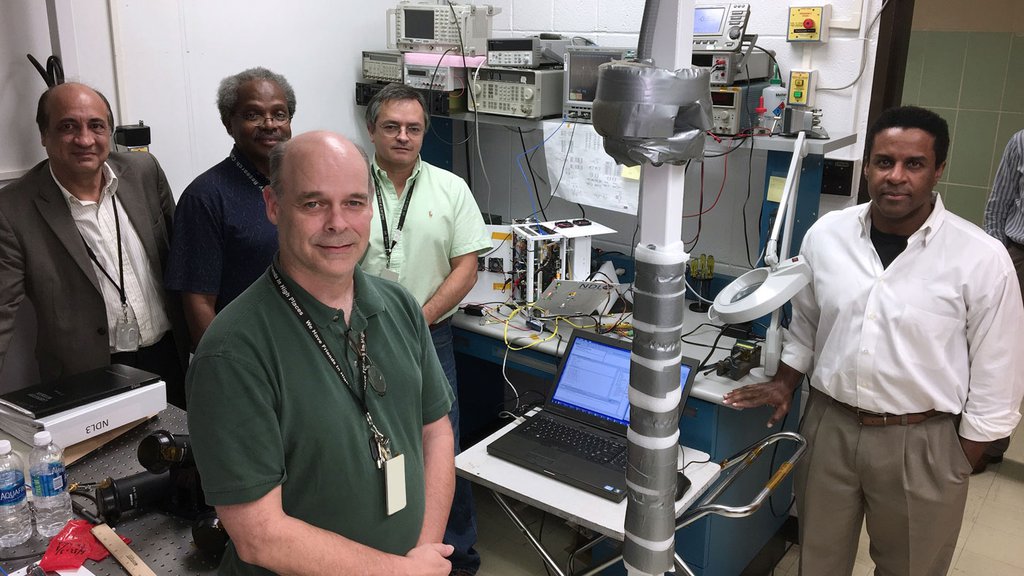 Many regions in the solar system beckon for exploration, but they are considered unreachable due to technology gaps in current landing systems. The CoOperative Blending of Autonomous Landing Technologies (COBALT) project, conducted by NASA's Space Technology Mission Directorate (STMD) and Human Exploration and Operations Mission Directorate, could change that.

Through a flight campaign this month through April, COBALT will mature and demonstrate new guidance, navigation and control (GN&C) technologies to enable precision landing for future exploration missions.

The campaign will pair and test new landing sensor technologies that promise to yield the highest-precision navigation solution ever tested for NASA space landing applications.

"In this first flight campaign, we plan to successfully complete the integration, flight testing and performance analysis of the COBALT payload," explained John M. Carson III, COBALT project manager. "This is considered a passive test, where COBALT will be solely collecting data, while the Xodiac vehicle will rely on its GPS for active navigation.""

In a follow-up flight campaign in summer 2017, COBALT will become the active navigation system for Xodiac, and the vehicle will use GPS only as a safety monitor and backup.

"The knowledge from these flights will lead into the development of systems for deployment in future NASA landing missions to Mars and the moon," said Carson.

So how does it work?

The technologies themselves are very different, but together they are a recipe for precision landing.

The NDL, developed at NASA's Langley Research Center (LaRC), is an evolution of a prototype flown by the former ALHAT (Autonomous precision Landing and Hazard Avoidance Technology) project on the NASA Morpheus vehicle in 2014. The new NDL is 60 percent smaller, operates at nearly triple the speed and provides longer range measurements.

"NDL functionally is similar to the radar systems used in previous Mars landers, Phoenix and Mars Science Laboratory," explained Farzin Amzajerdian, NDL chief scientist at Langley. "The major difference is that the NDL uses a laser instead of a microwave as its transmitter. Operating at almost four orders of magnitude higher frequency makes the measurement a whole lot more accurate. NDL also is much smaller than radar systems, which is a big deal as every ounce counts when sending a lander to Mars or other destinations."

LVS, developed at NASA's Jet Propulsion Laboratory, is a camera-based navigation system that photographs the terrain beneath a descending spacecraft and matches it with onboard maps to determine vehicle location, explained Carl Seubert, the COBALT project lead at JPL.

"This allows the craft to detect its location relative to large landing hazards seen in the onboard maps, such as large boulders and terrain outcroppings," Seubert said.

"Both NDL and LVS come from more than a decade of NASA research and development investments across multiple projects within robotic and human exploration programs, and from the hard work and dedication of personnel across the agency," said Carson.

"These COBALT technologies give moon and Mars spacecraft the ability to land much more precisely, improving access to interesting sites in complex terrain and to any exploration assets previously deployed to the surface," said Jason Crusan, director of NASA's Advanced Exploration Systems division. "Landings will also be more controlled and gentle, potentially allowing smaller landing legs and propellant reserves, and resulting in lower mission risk, mass and cost."

The COBALT team is managed at NASA's Johnson Space Center (JSC) in Houston, and comprises of engineers from JSC, JPL in Pasadena, California, and LaRC in Hampton, Virginia. All three centers will jointly conduct the flight campaign and post-flight data analysis.

"The progress and success of the COBALT project has relied on the team dynamic between NASA centers that started during the prior ALHAT project," said Carson. "The team has a common goal to develop and deploy precision landing GN&C technologies, and they maintain constant communication and a focus on collaboration to iron out the technical challenges and operational constraints required to develop, interface and successfully test the sensors and payload."

COBALT involves multiple NASA programs, including the Human Exploration and Operations Mission Directorate's Advanced Exploration Systems (AES), and the Game Changing Development and Flight Opportunities programs, both under STMD. In collaboration with the AES program, NASA is paving the way to reach farther into space.

Based at NASA's Armstrong Flight Research Center in Edwards, California, the Flight Opportunities program funds technology development flight tests on commercial suborbital space providers of which Masten is a vendor. The program has previously tested the LVS on the Masten rocket and validated the technology for the Mars 2020 rover.

The COBALT flights will demonstrate blended LVS and NDL measurement viability for the precise, controlled soft landing of future missions. While the sensors are key enablers for future human and robotic landing missions to Mars, the moon and other solar system destinations, the COBALT payload also will provide a reusable platform for integration and testing of other precision landing and hazard avoidance capabilities developed within NASA or industry.

For more information about the COBALT project, visit:

For more information about the Flight Opportunities program, visit: